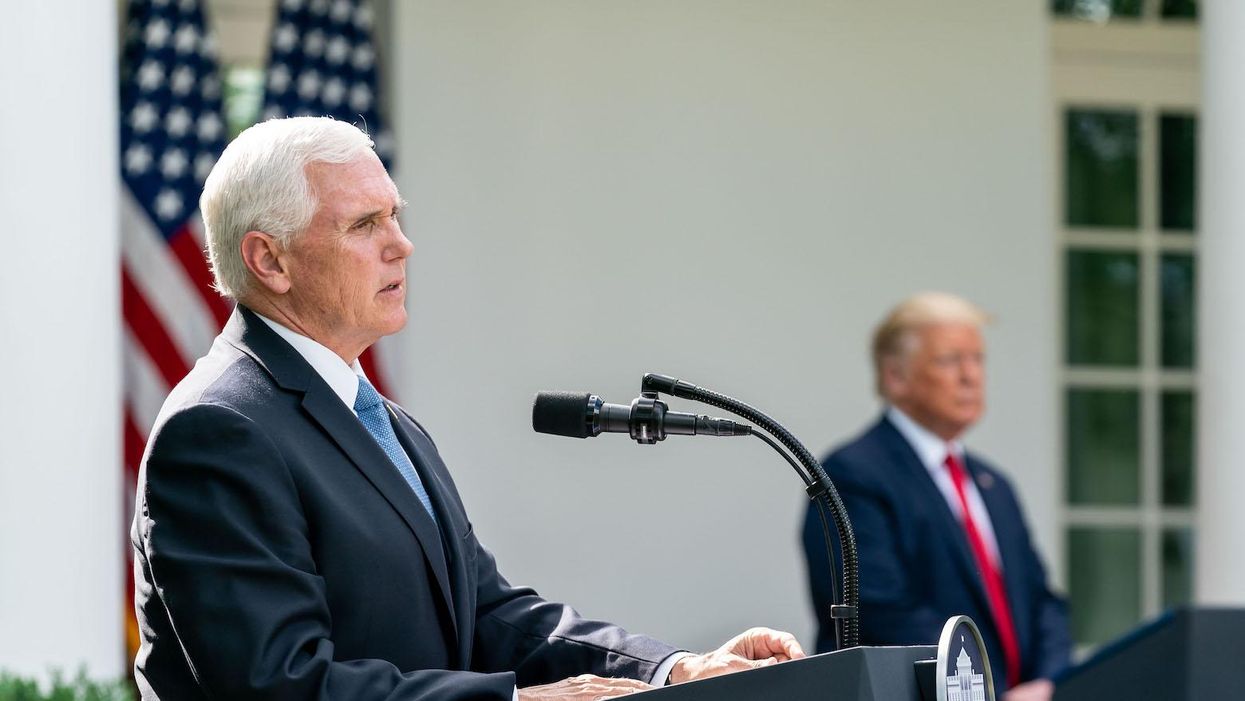 As the House of Representatives prepared Tuesday night to vote on a resolution calling for Vice President Mike Pence to invoke the 25th Amendment and remove President Donald Trump from his position, the man first in line to the Oval Office wrote a letter to Speaker Nancy Pelosi denying the request.

He started by acknowledging the shock of "the attack on our Nation's Capitol last week," and he praised her and others in Congress for their "leadership." But he wrote sharply against the idea of using the 25th Amendment.

"I do not believe that such a course of action is in the best interest of our Nation or consistent with our Constitution," he said. "Last week, I did not yield to pressure to exert power beyond my constitutional authority to determine the outcome of the election, and I will not now yield to efforts in the House of Representatives to play political games at a time so serious in the life of our Nation."


He argued that the 25th Amendment "was designed to address Presidential incapacity or disability," and it "is not a means of punishment or usurpation." He urged Pelosi and the Democrats to work to unite the country and prepare for President-elect Joe Biden's incoming administration, adding that they should avoid steps that would divide the populace — presumably referring to impeachment.

Pence's claims about the 25th Amendment have some merit. It's true that it was designed primarily as a method for addressing a presidential vacancy in the case a commander in chief was in a coma, disabled, or perhaps captured in a way that prevented them from carrying out their duties. But the language is written broadly, saying only that it can be used when the president "is unable to discharge the powers and duties of his office." It leaves the judgment of what constitutes such an inability up to the vice president and the Cabinet, and there's no reason it would rule out the kind of moral failings Trump is charged with, the inability to recognize and act to support the good of the country rather than himself. And it provides a mechanism for the president to contest the Cabinet and the vice president's determination of unfitness, as well as an opportunity for them to respond and for the Congress to weigh in. That suggests there's room for dispute about the proper determination that a president is unable to fulfill his powers and duties, and it can be left up to the judgment of the key actors.

What's particularly notable about Pence's letter, though, is that he actually didn't mention Trump once. While he said "the 25th Amendment was designed to address Presidential incapacity or disability," he never actually claimed that Trump was fully capable of being president at the moment. That is presumably the subtext of the letter. But if he believes that, why wouldn't he say it outright?

In any previous remarks about the president, Pence could have been expected to be excessively fawning. More than almost anyone else in public office, Pence has repeatedly gone out of way to heap praise on the president and exaggerate his virtues and achievements, a habit that his earned him much ridicule. But in this crucial communication, in which he confirmed that he will leave in power the man who sent a murderous mob after him just one week ago, Pence's adulation for the president suddenly vanished. He seemed loath to even mention Trump's name.