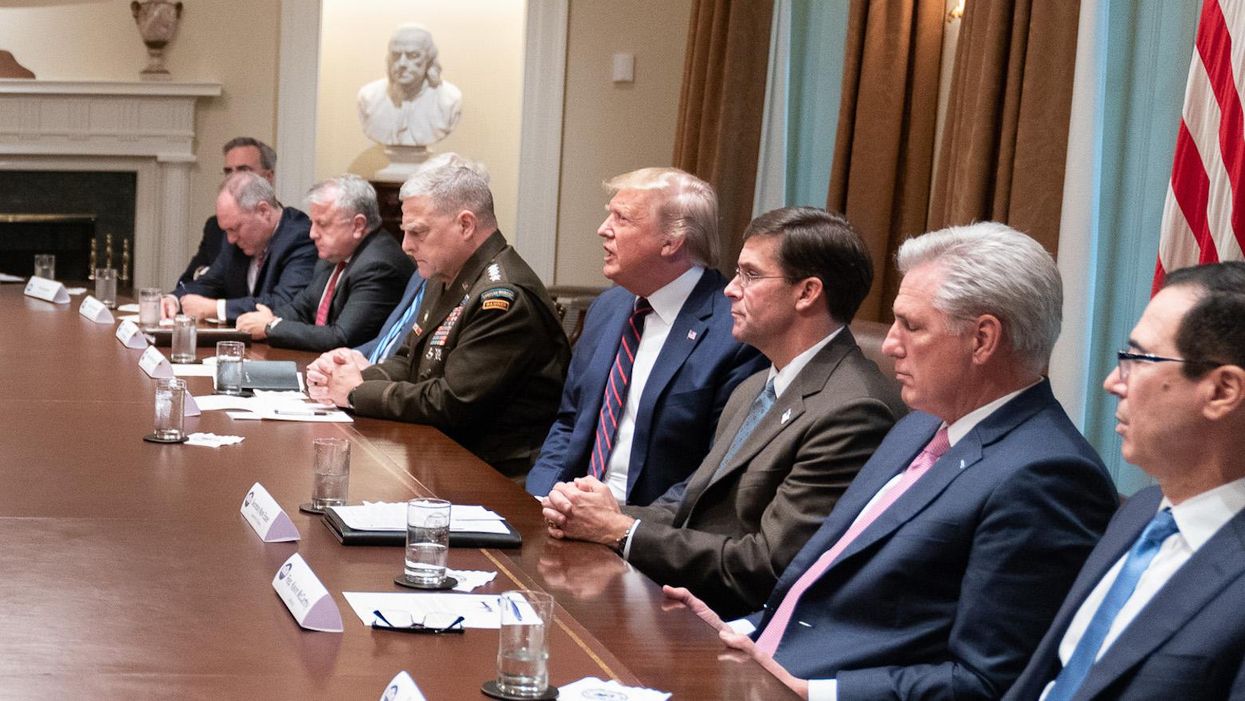 Donald Trump is clearly unhappy with having to sign the stimulus bill meant to relieve the massive economic pain from his bungled response to the coronavirus pandemic. Why else would he sign it abruptly, as he did late Sunday, to no fanfare? After all, this is a man who demands adulation at his every waking moment. Yet when it came to signing a bill that will send checks to millions of Americans, Trump was curiously camera-shy. Trump eschewing a camera is like a dog rejecting his favorite treat — clearly, the manbaby president isn't feeling so hot about how the stimulus standoff ended.

For six days, Trump has been threatening to tank this bill, possibly with a pocket veto. He was holding the economy hostage — and more specifically, holding hostage the chances of Republicans winning a Georgia Senate runoff or two — clearly hoping that doing so would be sufficient leverage to force Republican leadership on Capitol Hill into voiding his presidential election loss and illegally granting him a second term. But as often happens when Trump tries to live up to his own declarations of being a master negotiator, he face-planted— this time in a spectacularly humiliating style. So humiliating, that he approached signing the stimulus bill with the same attitude of a kid presenting himself for after school detention.

So what happened here? It's a little complicated, but ultimately, it's likely yet another one of Trump's failed schemes to steal the 2020 election from the real winner, former Vice President Joe Biden.

To recap: The $900 billion coronavirus legislation Trump signed was a compromise bill, passed through the Republican-controlled Senate only after many major concessions from the Democratic-controlled House, which passed its own much healthier $3 trillion package in May. Democrats wanted to cut checks to Americans for $1,200 a piece, along with more robust unemployment benefits and other major projects to reduce economic devastation from the pandemic. But Senate Majority Leader Mitch McConnell, R-Ky., who clearly didn't want to pass a second stimulus bill at all, only begrudgingly allowed a much smaller compromise — which includes $600 checks to Americans who made under $75,000 in 2019 — because he is worried that Georgia's GOP Sens. Kelly Loeffler and David Perdue will lose their runoff elections to Democratic challengers on January 5.

But after the Senate bill passed, Trump suddenly declared he wasn't satisfied and declared he wanted a bill with $2,000 checks instead of the $600 his administration initially agreed to. He later upped the supposed ante by declaring he wanted to toss another two thousand dollars on for people with kids.

The whole thing was, despite the high hopes of some of the dimmer lights of social media punditry, never a sincere offer from Trump. As Helaine Olen of the Washington Post noted on Thursday, Trump "maintained a low profile in the months-long stimulus negotiations between Democrats and Republicans in Congress." If Trump wanted more money for Americans, he had months to push for it, but aside from a random tweet in the fall, as Olen points out, "he didn't bother" to push for more money in any "meaningful way."'

No, as I argued last week, what Trump was up to was likely an extortion scheme, which is the only trick up his sleeve — and one he's not even particularly good at pulling. Trump believes, incorrectly, that McConnell and other Senate Republicans know how to steal the election, but are holding out on him. He hoped that by threatening McConnell's meager bill and therefore threatening the re-election of the two Georgia senators McConnell needs to hold onto his Senate majority Trump could shake the secrets to election theft out of McConnell. But, being bad at this, Trump didn't consider certain flaws in the plan, starting with the fact that McConnell simply has no way to steal the election for him and extortion will not change that fact. Nor did Trump consider that he would have to endure the humiliation of Democrats dunking on him non-stop.

Politico reports that Trump only signed the compromise bill "after days of being lobbied by allies," including Sen. Lindsey Graham, R.-S.C., and House Minority Leader Kevin McCarthy, R-Calif. What they said to him is not clear, especially since Trump, whose only interest is in himself, is unlikely to be interested in arguments about signing this bill for the good of the Republican party.

No, Trump likely only moved because it became evident that his extortion scheme had blown up spectacularly in his face, alienating the very people he (falsely) believes will be able to stop Biden's election certification on January 6.

But this should be no surprise. Trump's reputation as a skillful negotiator was always nonsense, the product of his only real talent, which is media manipulation. As Michael Kruse in Politico detailed in 2018, an examination of the evidence shows that Trump spent decades failing at even the easiest negotiations, blowing up a series of business deals and repeatedly incurring major bankruptcies. It's true that Trump did have some early successes in the late 70s and early 80s, but odds are that's because his lawyer/fixer Roy Cohn did the hard work for him. After Cohn's death, Trump's almost comical inability to negotiate became evident to anyone looking at the actual books and not listening to Trump's endless bragging.

So that's where Trump stands now: He didn't get anything he wanted, and, by making a pointless stink about all this, he's aggravated allies and invited his opponents to exploit him in embarrassing ways. He gave Democrats leverage to negotiate for a bigger bill, though it's still unlikely to pass Republicans, who didn't even really want the compromise bill. Ultimately, he exposed to Georgia voters what Mitch McConnell was trying to hide: Republicans are blocking their opportunity to get bigger checks.

The situation would be comical, except for the very real human cost to all of this.

By delaying the compromise bill with his little stunt, Trump allowed unemployment benefits to lapse and likely slowed the rollout of a vaccine. Losing even a couple of days like this can have a ripple effect through an already badly battered economy. But, of course, Trump never cared about that, just as he never really intended for anyone to get the $2,000 checks. He's not just playing games with people's lives. He's bad at playing them.