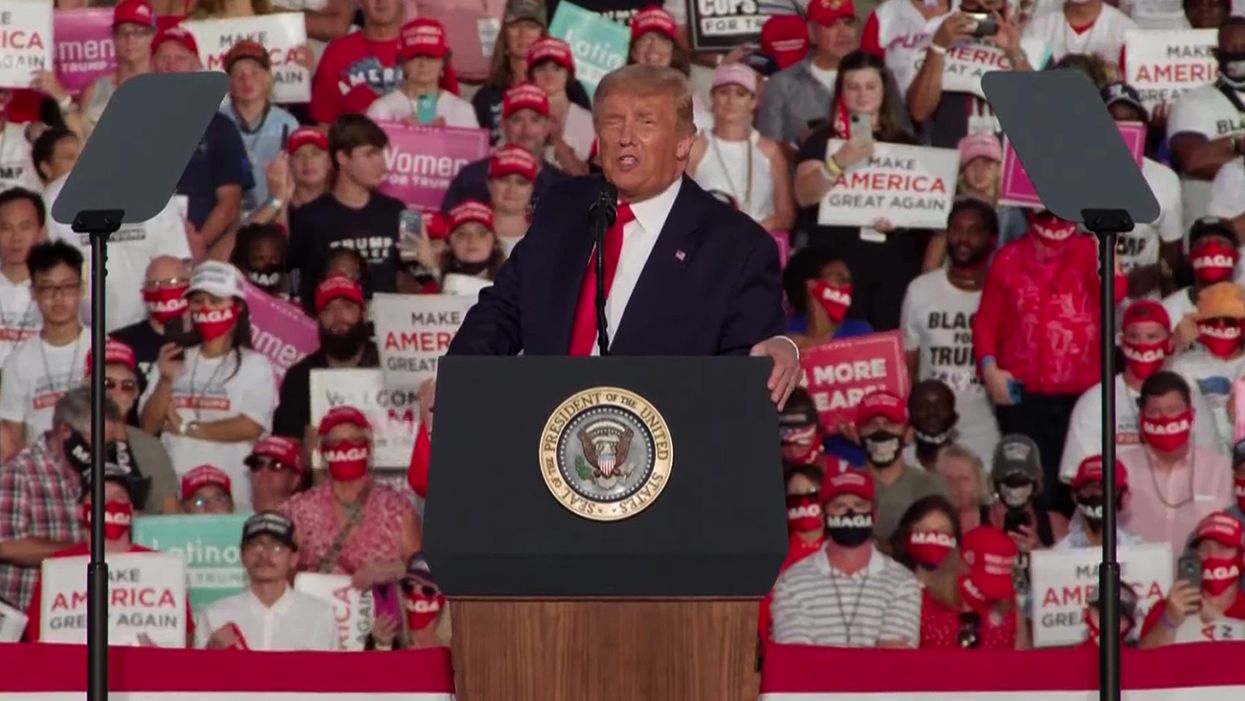 Trumpism was rejected by most Americans in the 2020 presidential election, which found President-elect Joe Biden winning 306 electoral votes, flipping five battleground states that President Donald Trump won in 2016 (Pennsylvania, Michigan, Wisconsin, Arizona and Georgia) and defeating the president by more than 6 million in the popular vote. But Trump has refused to acknowledge Biden as president-elect, firing up his MAGA base with nonsense claims of widespread voter fraud. Never Trump conservative and CNN pundit Amanda Carpenter, in an article published by The Bulwark on December 4, warns that Trump is promoting violence and instability during this lame duck period — and she slams all the Republicans who are "fine" with it.

"Why aren't more Republicans standing up and speaking out about Donald Trump's reprehensible acts?," Carpenter writes. "It's the eternal question of the Trump era and one that's been renewed this week after GOP officials in Georgia made public pleas to Republicans to rein in the president's dangerous election conspiracies. After four long years, it's finally time to stop parsing the motivations behind their collective silence and say what the real answer is, which is almost too scary to admit. They're fine with it. All of it. Really."

Carpenter, who formerly served as Sen. Ted Cruz' communications director and was a speechwriter for Republican ex-Sen. Jim DeMint (now president of the Heritage Foundation), goes on to describe "the grim circumstances of our current reality."

"The overwhelming majority of Republicans voted for Trump in 2020 — even after witnessing his escalating threats of violence and direct attacks on our democratic system," Carpenter laments. "Take your pick of the worst events of the Trump presidency. Charlottesville, Lafayette Square, kids in cages, Trump's egging on of militiamen, pipe bombers, mass shooters and vigilantes. None of it led to a significant break between Trump and elected Republicans."

Gabriel Sterling and Brad Raffensperger were just fine with all Trump’s dangerous rhetoric until they faced the rou… https://t.co/mnnHVnqqDI
— Amanda Carpenter (@Amanda Carpenter)1607090414.0

According to Carpenter, "The only times we've heard real, vigorous pushback against Trump have been when Republicans found themselves suffering the unpleasant consequences of their party's decision to cultivate a rabid, unhinged base." And she cites recent events in Georgia as a disturbing example.

Georgia Secretary of State Brad Raffensperger, a right-wing Republican, has been receiving death threats from MAGA extremists for acknowledging Biden as president-elect and saying that widespread voter fraud did not occur in the Peach State as Trump and far-right attorneys like Sidney Powell and Lin Wood have been claiming. Trump has denounced Raffensperger as "an enemy of the people."

Carpenter stresses that Raffensperger was not a Never Trumper — he voted for Trump "but didn't like it when Trumpism collided directly into his life." And she points out that elections administrator Gabriel Sterling, another Republican, has "blasted Trump campaign lawyer and former U.S. Attorney Joe diGenova for calling for the execution of Chris Krebs, the federal elections cybersecurity chief recently fired by Trump."

But the problem with Raffensperger, Sterling and other Republicans, Carpenter argues, is that they were enabling Trumpism before they were personally affected by it.

"What are a few death threats, even among supposed GOP friends, when it comes to retaining and reclaiming political power?," Carpenter writes. "They're fine with it. Deep down, Sterling is too. Just as long as it isn't affecting him."