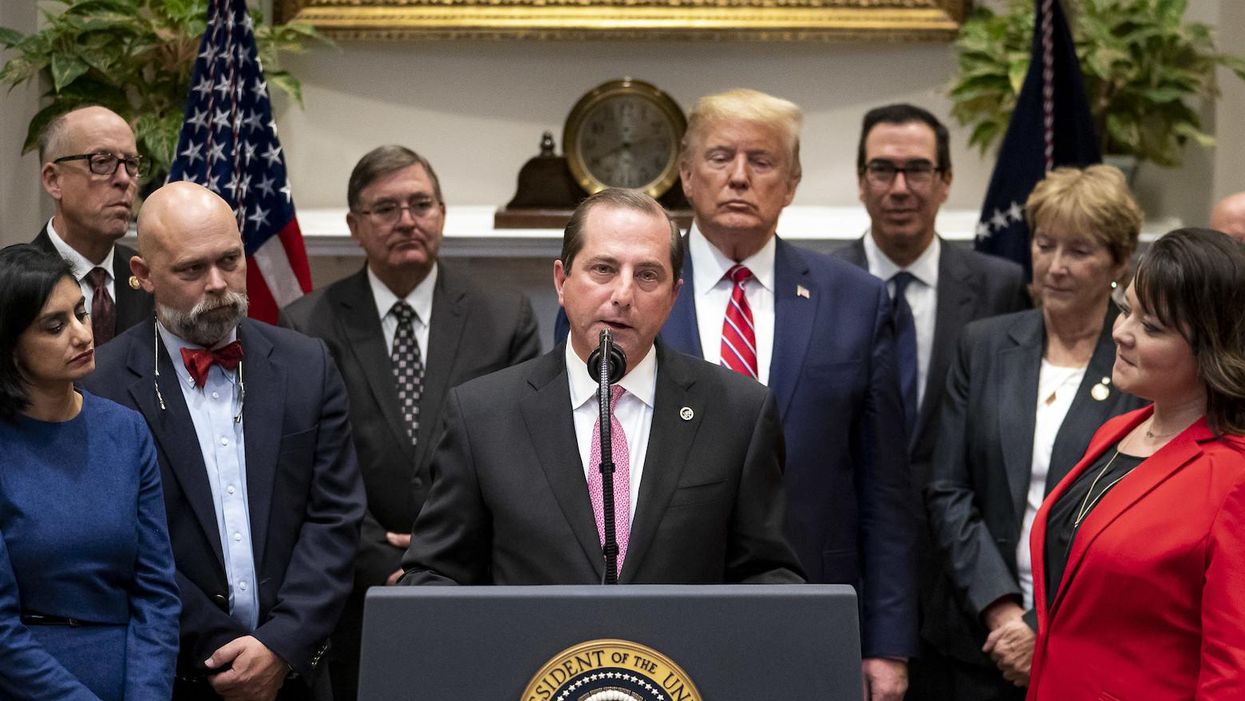 A career employee for the U.S. Department of Health and Human Services is confirming details about many of the Trump administration's violations, behaviors, and practices.

A new report published by Politico highlights the days following the departure of Tom Novotny, who previously served as the Assistant Surgeon General in the U.S. Public Health Service and Deputy Assistant Secretary for International and Refugee Health. Joshua Prasad, who served as a public health adviser under Novotny, penned a letter about his Sept. 13, 2017 meeting where he claims he was "pushed to resign or be fired himself, and then swiftly marched out of the building by security."

The timing of Prasad's firing raised red flags. The termination is said to have gone into effect on Sept. 15, 2017 just one day before "Prasad's protections as a career civil servant would have kicked in, which would have made it nearly impossible for the Trump administration to swiftly fire him."

When Prasad was used as an example for other employees within the department, it left a wave that reportedly "lingered with them for months — especially because Prasad was instructed not to talk to anyone, even longtime teammates that saw him escorted out the door," according to the publication.

"Science and Medicine, in my opinion, has been a particularly important team in [our office] in recent years," Prasad wrote in a subsequent resignation letter, obtained by POLITICO, in which he pleaded with the office's acting leader to preserve his colleagues' efforts to protect LGBTQ health, improve tobacco control and gather data on racial disparities, among other public health priorities. "I hope that you and your new teams will find a way to keep the ideas, leadership and passions provided by our team alive."

Kimberly Konkel, a career HHS official also weighed in on the editorial as she confirmed that she witnessed many of the violations detailed in the piece.

"I am a witness to these behaviors/practices. I was asked to pray twice by the same Trump official," Konkel tweeted. "Once in a cafeteria with our team & once in a 1:1 at the start our first meeting. I was then removed from my position.

She added, "This is what I'm referring to: 'Other violations of what career HHS employees saw as good government popped up nearly every week. Trump appointees asked career staff to join them in prayer before meetings, said two officials.'"

This is what I'm referring to: "Other violations of what career HHS employees saw as good government popped up near… https://t.co/h1qOIzb4k8
— Kimberly Konkel (@Kimberly Konkel)1609432676.0

Many former HHS officials noted the many changes within the federal agency that took place seemingly overnight after Trump's Inauguration in 2017.

"They ran all of HHS like it was a political campaign and not an executive agency," said one former official who recalled the stark changes that appeared to happen "overnight after Inauguration Day in 2017.

The former official also noted the change in television networks. Instead of a rotation between networks as had been standard during the previous administration, the Trump administration trained all televisions on Fox News. "In the Obama administration, the TVs rotated between Fox News, MSNBC, and CNN," the former official added. "But things changed very rapidly under Trump, with Fox News being put on all the TVs. … It's like they only wanted the TVs to repeat the news they wanted to hear."

The series of events that unfolded following Novotny's departure set the tone for the Trump administration's chaotic coronavirus pandemic response. The firings that took place in September of 2017 were merely a prelude to Trump's pressuring and undermining of scientists amid the pandemic.

"Years before Trump's deputies pressured scientists to rush the president's preferred malaria drugs as Covid-19 treatments without evidence of their effectiveness, Trump's deputies pressured health officials to kill a variety of health programs — from Obamacare ads to teen pregnancy prevention — driven by their own beliefs rather than data showing that the programs didn't work."

The Trump administration's impact continues to ravage the United States. As of Thursday, Dec. 31, there have been more than 20 million coronavirus cases reported across the country. America's COVID-related death toll has now surpassed 350,000.