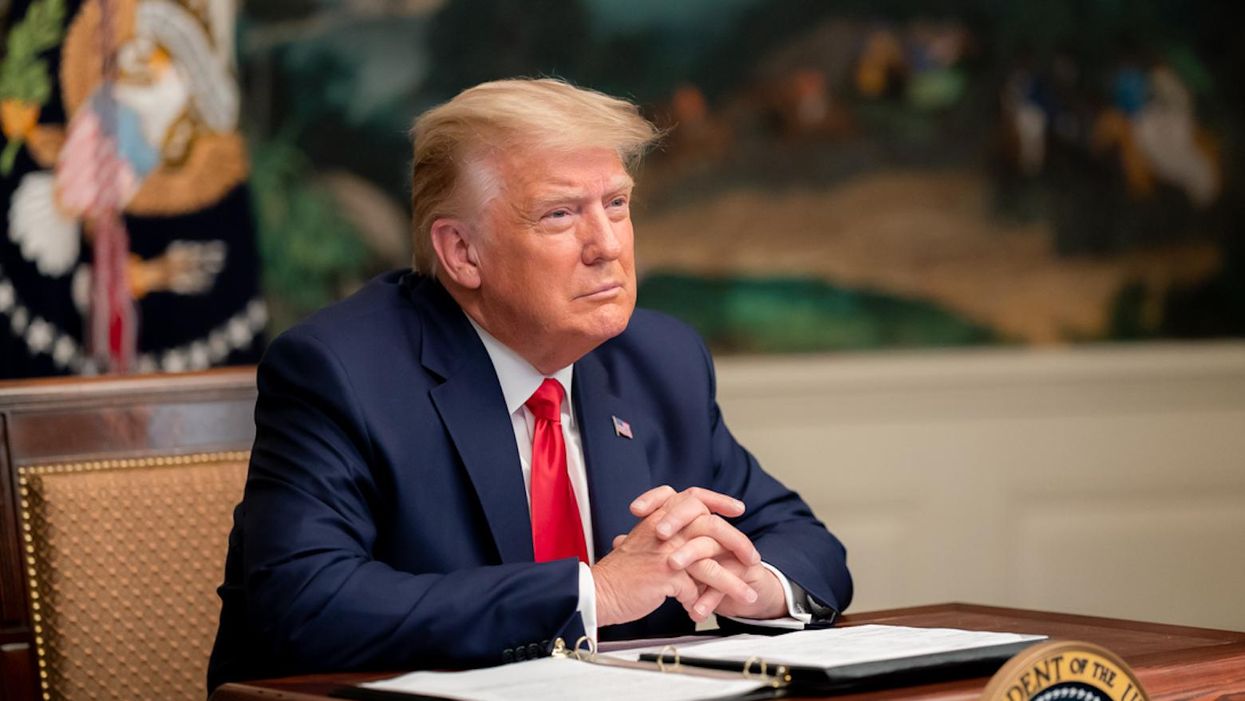 Donald Trump was at it again Wednesday, releasing a 46-minute video full of ridiculous lies, claiming that his loss to Joe Biden in November's presidential election was due to "corrupt forces" operating "on a scale never seen before." He called on the Supreme Court to throw out enough votes so that "I very easily win in all states."

It's the sort of thing that used to be both riveting and terrifying. Indeed, two days after the election, Trump went on national television to give a similar, if blessedly shorter, speech making essentially the same claims: That he's the victim of a widespread conspiracy, that he's the real winner, that votes from certain cities — strangely enough, cities with large Black populations — are inherently suspect and illegitimate.

At the time, most experts felt confident that Trump's coup attempt would fail. Still, watching the president of the United States blatantly attempt to steal an election by telling vicious and racist lies was chilling. For weeks, there was an undercurrent of panic that he might somehow pull it off, as he has managed, in the past, to pull off all manner of illegal and unethical acts without facing consequences.

But as often happens with sequels, Trump's latest conspiracy theory tirade was bigger and bolder, yet somehow much less impressive. Trump's self-pitying rant registered as pitiful instead of frightening. The speech barely touched the top headlines at most major news sites. It was driven down in coverage not just by the rapidly worsening COVID-19 pandemic, but also by other political stories, such as the U.S. Senate runoff election in Georgia and even other Trump-related stories, like the fate of Attorney General Bill Barr or the impact of Michael Flynn's pardon. The tone of most media coverage was more condescending than fearful. Outrage is quickly being eclipsed by annoyance at Trump for being a pest who doesn't know when to pack it up and go home.

Stephen Colbert was back to his usual form, dunking on Trump with carefree laughter.

What has changed? It certainly isn't Trump himself, who hasn't changed in his entire life, and will die as the same dumb and miserable narcissist he has been since he first paid someone else to take his SATs for him. His attacks on democracy are just more of the same narcissistic pseudo-ideology that has defined his entire life, a stalwart belief that he can bullshit his way out of anything and that he should be allowed to "win," no matter what, simply because he was born a Trump.

No, what has changed is power. Trump may still be president for another 48 days, but his power is receding, and with it his ability to terrorize us with his lies is receding as well. Arguably, Trump accelerated the process of losing his power by attempting a coup in a first place. Every time he loses a battle, in the courts and the statehouses, he illustrates again the limits of his powers. He's looking less like a dictator and more like a sad guy at an undersized desk every day.

With his bad suits, stupid hair and clownish lies, Trump is a living illustration of why authoritarians worship power so much — because only power can imbue a buffoon as ridiculous as Donald Trump with importance.

Liberals wonder constantly why Trump supporters aren't more embarrassed by the man, who can barely read and who suggested, with a straight face, that doctors might want to treat COVID-19 by injecting bleach into people's lungs. How do they not cringe in shame to vote for such a person?

Not to get too galaxy-brain about this, the truth is that Trump's cringeworthiness was part of the pleasure for his supporters. Being able to foist this embarrassment of a president on the nation was quite the flex! It was a demonstration of raw power, being elevate a man so absurdly unqualified to the highest office in the land.

When owning the liberals, subtlety is not required. On the contrary, those who worship power couldn't get enough of watching the smart people of the world — the Dr. Anthony Faucis and the Nancy Pelosis and the Justin Trudeaus — have to sit in a room with this ignorant tub of self-regarding goo and take him seriously, just because he was legally the president.

Trump himself understands this dynamic. It's why his very first act as president was to tell a ridiculous lie, that his inauguration crowd size was bigger than Barack Obama's. It was a lie he made his then-press secretary Sean Spicer repeat to reporters, as a clear test of Spicer's skills at keeping a straight face through obvious whoppers. Soon enough, Trump's supporters were in on the con, insisting to pollsters that they believed Trump's crowd was bigger than any crowd ever, no matter what the photographic evidence indicated.

Many liberals responded by assuming that everyone involved with bolstering this lie had to be a delusional idiot, but experts in authoritarianism saw it differently: Trump was testing his newly obtained power.

"The absurdity is part of the point," Megan Garber of the Atlantic wrote about Trump's silly inauguration lies. "The president lies because, as any autocrat will tell you, lying is its own will to power."

For four years, liberals held out hope that somehow, one of our many cherished values would save us from Trump. We looked to reason, to decency, to truth and to justice. None of it mattered. In the end, the only thing that took Trump down was power — the power of 80 million voters rising up to kick him out on his butt. There's a lesson in this, if liberals want to learn it.

Trump himself understands perfectly well that power is the only thing that really matters. His lies are the same whirlwind of noise that they always were. They're not meant to be believed or to make sense or to achieve any of the other goals of more prosaic liars. His crackpot legal team led by Rudy Giuliani doesn't even bother to bring any actual evidence or coherent arguments before the various authorities — judges, state legislatures, election boards, governors — they are seeking to pressure into stealing this election for them. It's all just an appeal to authority, a plea for those with power to abuse it on behalf of their overlord.

If this election had been closer, that strategy might very well have worked. If it had come down to a narrow margin in just one state, for instance, it's easier to imagine the Supreme Court or a state legislature or some other Republican-controlled body deciding to leverage their power to give Trump more of it. But because voters used their power, Biden won too many states for Trump to pull off the coup he was anticipating.

Donald Trump himself is becoming a joke now, but unfortunately the larger Republican Party has fully absorbed these lessons about power. GOP politicians speak openly and shamelessly about their efforts to disenfranchise voters. They've become fully authoritarian, uninterested in even pretending to care about fairness or justice, and instead are quite open about their focus on a will to power. Their voters continue to reward them for it, because virtually the entire Republican base has also been radicalized. The situation is grim.

Still, we can glimpse a ray of hope in Trump's swift metamorphosis from a direct threat to democracy to the butt of jokes about "massive dumps." There's an important lesson here. Authoritarians cannot be shamed or reasoned with, the way believers in democratic norms typically can be. There is no arguing authoritarians down, bargaining with them or laughing them away. But authoritarians do respond to power. Power is how Trump was finally stopped and beaten, and revealed as the small, strange man he always was. And power is what it will take to stop the rise of American fascism.