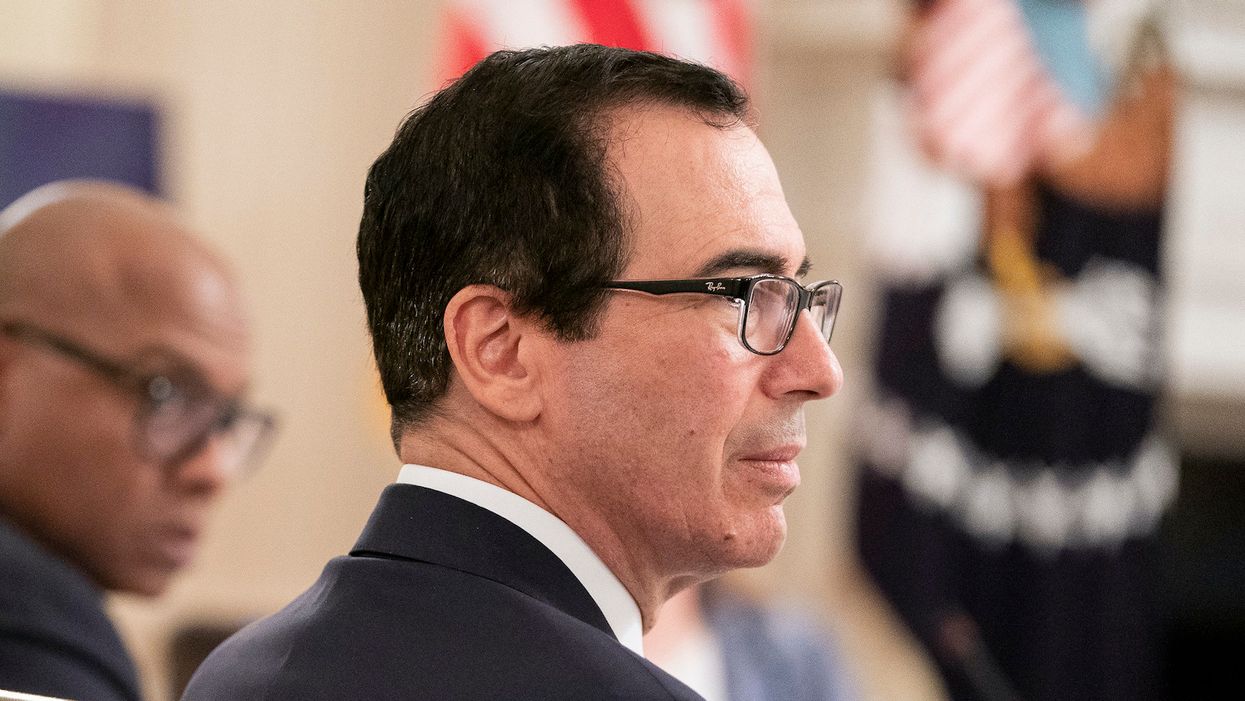 The Trump White House late Tuesday tossed into the middle of ongoing coronavirus relief negotiations a $916 billion proposal that includes one-time $600 stimulus payments in the place of a weekly boost to federal unemployment benefits, a trade-off that Democratic lawmakers and economic analysts immediately rejected as unconscionable.

Offered as Democratic and Republican negotiators are racing to strike a relief deal before year's end, the White House plan would provide $40 billion for an extension of federal unemployment programs set to expire on December 26—but no increase in weekly benefits, despite the dire state of the economy.

The Trump administration's unemployment insurance plan, put forth by Treasury Secretary Steve Mnuchin, falls well short of a bipartisan framework that calls for $180 billion in funding to boost unemployment benefits by $300 per week through March.

"The president's proposal starts by cutting the unemployment insurance proposal being discussed by bipartisan members of the House and Senate from $180 billion to $40 billion," House Speaker Nancy Pelosi (D-Calif.) and Senate Minority Leader Chuck Schumer (D-N.Y.) said in a joint statement. "That is unacceptable."

As a substitute for the lack of a weekly unemployment boost, the White House proposed a round of direct stimulus payments amounting to $600 per adult and $600 per child.

By contrast, the $2.2 trillion CARES Act that Congress approved in March sent one-time payments of $1,200 per adult and $500 per child to most U.S. households, on top of a $600-per-week unemployment supplement that proved remarkably successful until Republicans allowed it to lapse at the end of July.

"We gave the biggest help to those who needed it," Rep. Don Beyer (D-Va.) said of the CARES Act. "The Republicans would send one $600 check and that's it. This is atrocious."

Andrew Stettner, a senior fellow at The Century Foundation, noted that "unemployed workers are going thousands in dollars in debt on paltry benefits."

"Stimulus checks are not a substitute," said Stettner, a sentiment echoed by other analysts.

Republicans are now insisting that we can either do another one-time stimulus check or another temporary boost to u… https://t.co/yidRY4nNJm
— Michael Linden (@Michael Linden)1607478501.0

With hiring slowing sharply as coronavirus infections rise nationwide, economists have warned that failure to approve a weekly unemployment boost would heighten the misery already being felt by tens of millions of people across the U.S. According to recent data, around 20 million Americans are currently receiving some form of unemployment insurance, 26 million are struggling to afford enough food, and 40 million could face eviction in the near future.

"The expiration of vital pandemic unemployment insurance (UI) benefits on December 26 will leave 12 million workers without a safety net, and over four million others will have already exhausted their benefits by this cutoff," Elise Gould, senior economist at the Economic Policy Institute, wrote in a blog post last week. "This spells trouble not only for workers and their families who are desperately trying to keep a roof over their heads and put food on the table—especially with the eviction moratorium also set to expire on December 31—but also for the recovery itself."

In addition to being dramatically less ambitious than the CARES Act, the White House's new proposal and the bipartisan plan embraced as a starting point by Democratic leaders are both a far cry from the kind of bold stimulus that experts say is needed to prevent a prolonged recession and ensure a just recovery.

A paper (pdf) authored by economists Dr. Mark Paul and Dr. Adam Hersh and released Tuesday by the Groundwork Collaborative estimates that "Congress needs to provide economic relief of between $3-4.5 trillion in the short-term in order to get American families and businesses working at their full potential."

"This would include continuing to expand eligibility for unemployment insurance benefits, renewing the $600 weekly supplemental benefits, providing fiscal aid to offset budgetary pressures on state, local, and tribal governments, renewal and better management of the Paycheck Protection Program for small businesses, and resources to expand Covid testing and tracing and health insurance subsidies, among other measures," the economists wrote.

"The longer Congress waits to act," they warned, "the more permanent damage will be done to American families and the overall economy, and the harder it will be for the U.S. economy to regain prosperity."