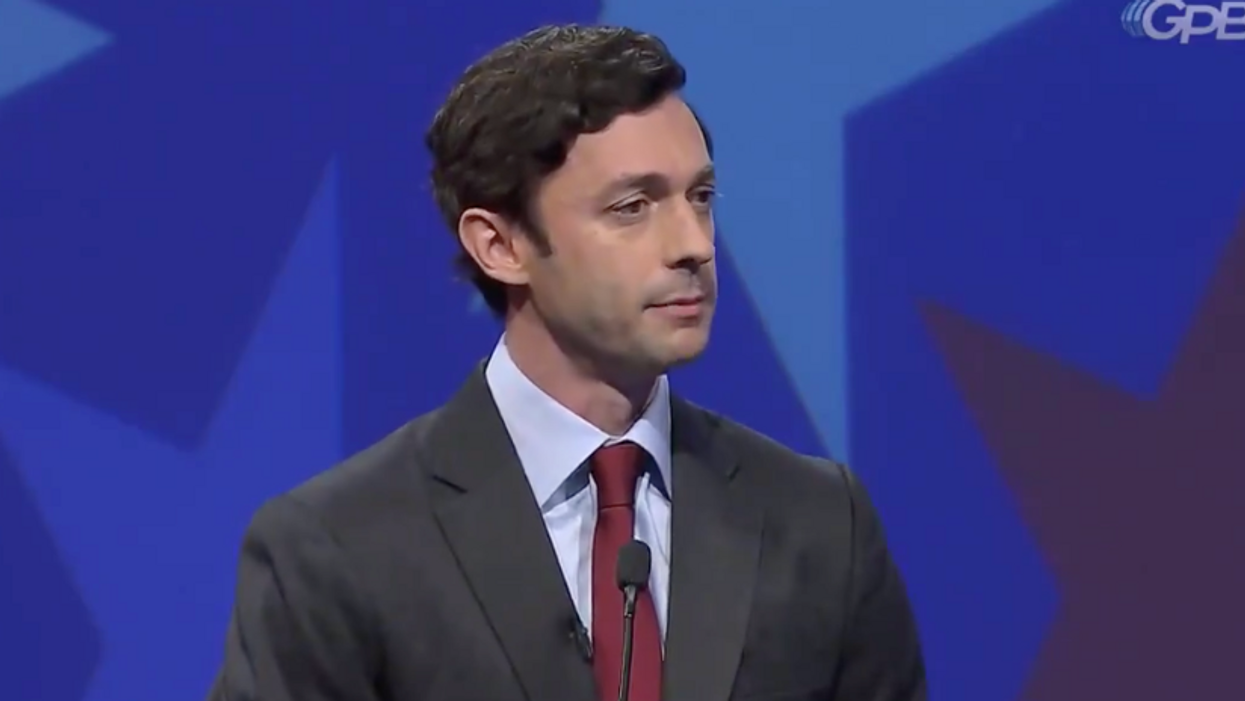 Democratic U.S. Senate candidate Jon Ossoff on Sunday was forced to debate an empty podium after incumbent Georgia Sen. David Perdue, facing growing scrutiny over his potentially unlawful trades, refused to show up at the televised event, which came less than a month ahead of the state's pivotal January 5 runoff races.

Ossoff, who narrowly lost a Senate runoff to Republican Karen Handel in 2017, suggested Sunday that Perdue declined to participate because he "doesn't feel that he can handle himself in debate, or perhaps is concerned that he may incriminate himself in debate."

"It shows an astonishing arrogance and sense of entitlement for Georgia's senior U.S. senator to believe he shouldn't have to debate at a moment like this in our history," Ossoff said. "His blatant abuse of his power and privilege to enrich himself is disgraceful."

The Georgia Democrat was referring to recent suspiciously-timed stock trades by Perdue that led the Justice Department to launch a probe into possible insider trading. As the New York Times reported, Perdue earlier this year "sold more than $1 million worth of stock in the financial company Cardlytics, where he once served on the board."

"Six weeks later, its share price tumbled when the company's founder announced he would step down as chief executive and the firm said its future sales would be worse than expected," the Times noted. "After the company's stock price bottomed out in March at $29, Mr. Perdue bought back a substantial portion of the shares that he had sold. They are now trading at around $120 per share."

Ossoff used his opportunity as the lone candidate on the debate stage to slam Perdue and the Republican-controlled Senate for refusing to pass additional relief as the coronavirus pandemic and resulting economic crisis continue to get worse nationwide, leaving millions unable to afford basic necessities and at risk of total destitution.

"It's absolutely astonishing that the United States Senate, since midsummer, has not passed any additional direct economic relief for the American people," said Ossoff. "They should be in emergency session right now... Where is Congress? Where is David Perdue?"

It's absolutely astonishing that the United States Senate, since midsummer, has not passed any additional economic… https://t.co/EQMQUE90Sd
— Jon Ossoff (@Jon Ossoff)1607293005.0

The contest between Ossoff and Perdue is one of two Senate runoffs set for January 5; Democrats must prevail in both races to create a 50-50 tie in the Senate, which could be broken by Vice President-elect Kamala Harris.

Both candidates for Georgia's other runoff, Sen. Kelly Loeffler (R-Ga.) and Democratic challenger Raphael Warnock, showed up to debate Sunday and sparred over coronavirus relief, criminal justice reform, and the results of the 2020 presidential election.

Loeffler, who has also faced scrutiny over shady stock trades, refused to say that President Donald Trump lost the November election and ducked several questions about his false claims of voter fraud.

Warnock, for his part, repeatedly attacked what he characterized as Loeffler's unethical profiteering and slammed the Republican incumbent over her support for repealing the Affordable Care Act, a move that would strip health insurance from tens of millions of Americans amid a deadly pandemic.