Busted? Why the numbers behind Mitch McConnell's re-election don't add up

On a Thursday in August in Louisville, months before the 2020 election, a parade of cars filled with Kentucky Teamster representatives and labor groups, showed their fury at Mitch McConnell's constant blocking of critical COVID aid. They drove by McConnell's office raucously honking and bearing signs saying "Mitch better have my money."

In 2017, a Public Policy Polling Survey asked Kentuckians, "Do you approve or disapprove of Senator Mitch McConnell's job performance?" Only 18% approved. He clawed his rating back up to 39% on the eve of the election.

1 out of 5 voters appear to have filled out their ballots with votes for both the female Democratic Amy McGrath and the Republican pussy-grabber Donald Trump.

So, what exactly drove these angry Kentuckians to reelect Mitch McConnell with a 19-point advantage over opponent Amy McGrath—57.8% to 38.2%?

Even as Republicans across the country still insist that the election was rife with fraudulent Democratic votes, no one's asking how McConnell managed one of the most lopsided landslides of the Nov. 3 election. They should. An investigation of Kentucky voting results by DCReport raises significant questions about the vote tallies in McConnell's state.

DCReport focused on the results in three counties in eastern Kentucky's Appalachian Mountains, two of which Democrats usually always win, but similar patterns emerge in other counties across the state. Even in counties that voted overwhelmingly for Democrats as recently as the 2019 gubernatorial election, there were a staggering number of Democrats voting Republican in 2020.

Conventional political wisdom in McConnell-land holds that these days "ancestral Kentucky Democrats" vote Republican, and analysts shouldn't correlate party registration with voting patterns. But simply dismissing any anomalies based on anecdotal hearsay ignores the data and other possible explanations. McConnell won Breathitt County in 2020 with 1,308 more votes than he received in the county's much closer 2014 race, which he won by fewer than 400 votes. The 2019 governor's race was also a squeaker in Breathitt County, but Democrat Andy Beshear eked out a 69-vote victory. Beshear won the race statewide.

McConnell's results were even more out of whack in two other nearby Appalachian counties. In his six previous Senate elections, Elliott and Wolfe counties had never voted for McConnell. Even up to last year, Elliott County remained reliably Democratic in non-presidential races, voting for the party's entire Democratic slate in both the 2015 and 2019 statewide elections. Yet in 2020, McConnell won 64% of the votes in Wolfe County and 66% of the votes in Elliott County. McGrath only got 21% of registered Democrats in Wolfe and 20% in Elliott.

Next, take the premise that there would be some basic logic in the voting patterns of those who did vote Democratic. One might expect a registered Democrat, who's going to vote Democratic, would walk into the booth and cast their vote for both Joe Biden and Amy McGrath. But the data tell another story. In 119 of 120 counties, Amy McGrath got more votes than Joe Biden. In some counties, the votes were close. But in counties like Breathitt and Elliott, 1 out of 5 voters appear to have filled out their ballots with votes for both the female Democratic Amy McGrath and the Republican pussy-grabber Donald Trump.

In November 2017, Judicial Watch, a right-wing non-partisan foundation promoting transparency, sued Kentucky over its "Dirty Voter Rolls" and its failure to maintain accurate voter registration lists. The suit argued that 48 of the 120 Kentucky counties had more registered voters than citizens over the age of 18 and alleged that Kentucky was one of only three states with a statewide active registration rate greater than 100% of the age-eligible citizen population. Kentucky's inflated voter rolls, and lack of transparency, provide a perfect cover for malfeasant behavior regarding the election results. 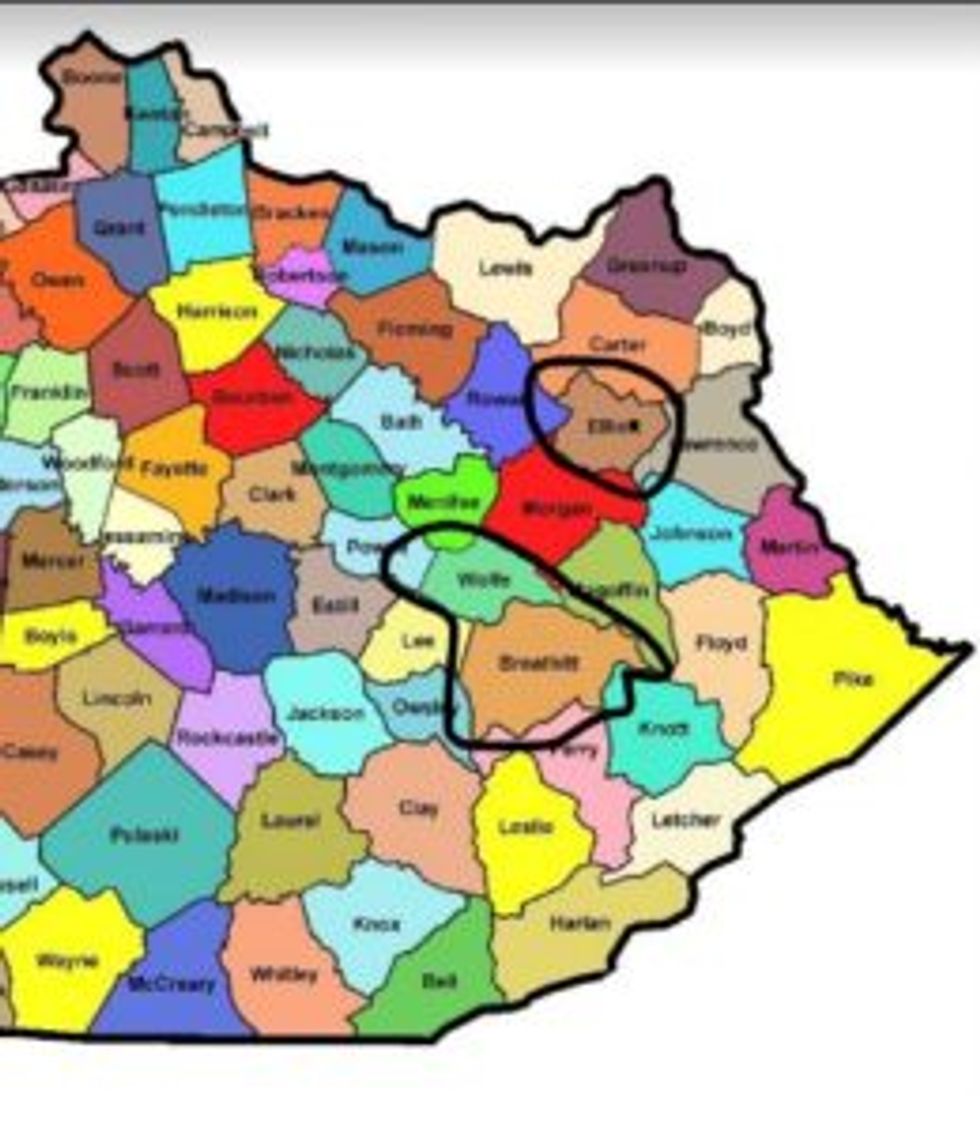 Turning an 18% approval into a 58% win may seem like a "turning water into wine"-style miracle, but a "smoke & mirrors" parlor trick seems more likely. To better understand how the data could have been manipulated, look no further than Trump's own legal filings. In an incompetent post-election lawsuit, the Trump team may have intended to accuse Democrats of election fraud, but in describing a possible plot, they attributed the cheating to Trump himself.

In a Dec. 4 filing in Georgia, Trump's legal team referred to a "machine-controlled algorithm deliberately run" by a voting machine vendor, Dominion Voting Systems. They allege this algorithm "generally took more than 2.5% of the votes from Mr. Biden and flipped them to Mr. Trump." So Trump's own legal team, instead of providing evidence of fraud by Biden's side, may have inadvertently revealed fraud benefiting Trump. In describing a deliberate, vendor installed, machine-controlled algorithm automatically taking a percentage of Biden's votes and giving them to Trump, they certainly are outlining how fraud could have been executed.

In Kentucky, when looking at counties where the numbers leap out on behalf of Mitch McConnell, none used Dominion machines. Most used machines from Election Systems & Software (ES&S), a Dominion competitor. If you swap ES&S for Dominion in the alleged vote-flipping scheme, you may arrive at an alternate explanation for why Amy McGrath's numbers weren't lining up and correlating with Biden's.

To steal an election it may make sense to use different algorithms for each race on the ballot so results did not appear to be uniform. Knowing the McGrath-McConnell race faced more nationwide scrutiny, schemers might have had to miscount votes by different margins in the presidential and Senate races. Flipping more votes from Biden to Trump than McGrath votes to McConnell would explain her getting approximately 20% more votes than the Democratic presidential candidate.

Significantly, Trump and his post-election legal team have pointed at Dominion voting machines and implored courts to look into this automated vote-flipping premise—but only in states that he lost. So, let's test it in ES&S states like Kentucky where Trump won.

McConnell had his biggest percentage of registered Democrats voting Republican in counties using ES&S machines. But he wasn't the only senator to perform so well. Other Republican incumbents, whom polls indicated would have close races, had similar luck to their majority leader on election day.

Lindsey Graham's race in South Carolina was so tight that he infamously begged for money, yet he won with a comfortable 10% lead—tabulated on ES&S machines throughout the state. In Susan Collins's Maine, where she never had a lead in a poll after July 2, almost every ballot was fed through ES&S machines. Kentucky, South Carolina, Maine, Texas, Iowa and Florida are all states that use ES&S machines. Maybe the polls didn't actually get it wrong.

When Trump says "look over here" at Dominion voting machines, maybe we should look at ES&S machines instead. When Republicans spout unfounded claims that Democrats stole the election, maybe we should be looking at Republican vote totals instead. And when Trump calls this the most fraudulent election in our history, maybe he knows of what he speaks.