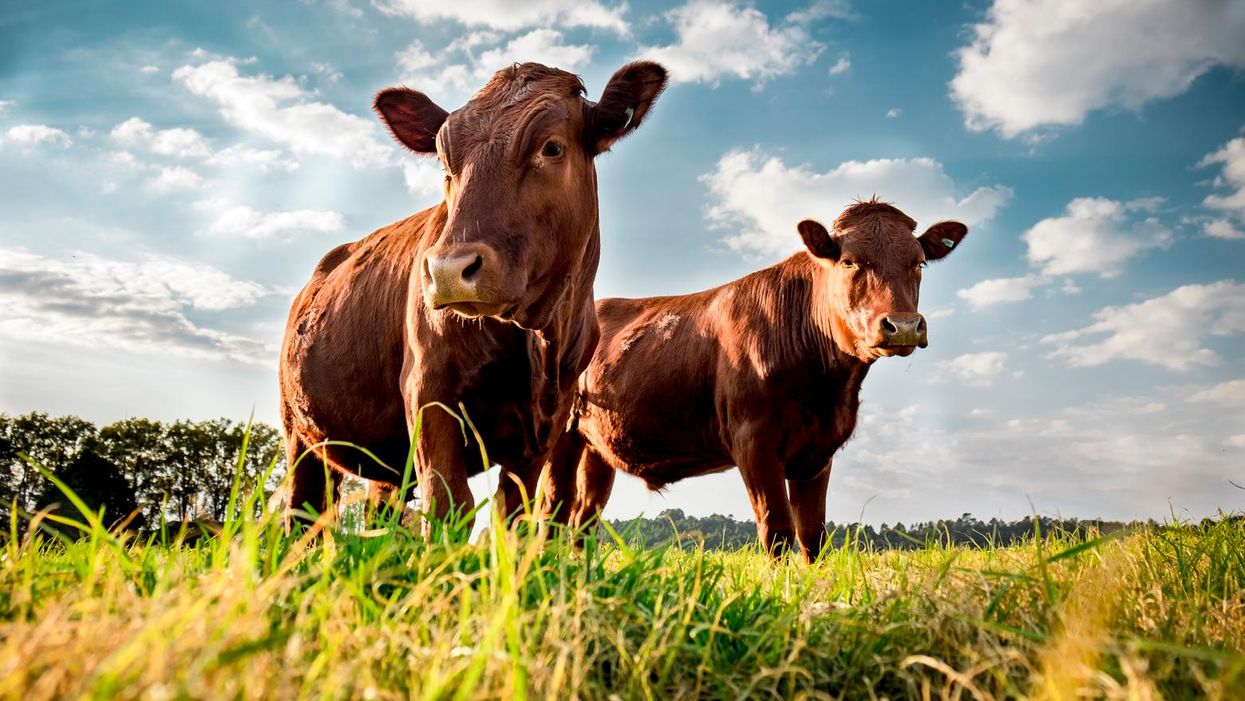 While Republicans, including Donald Trump, have falsely claimed that the Green New Deal would require eliminating raising cattle for meat, the truth is there is no such requirement in the proposed legislation, or in Joe Biden's proposed environmental policy. Still, there's no doubt that the over 1 billion domestic cows on planet Earth are a genuine monster when it comes to resources. Raising all that meat-on-the-hoof requires enormous tracts of land as well as tremendous amounts of water. In the United States alone, the grain that goes to cattle each year could potentially feed the entire population of the country more than three times over.

Then there's the methane. It may seem embarrassing, disgusting, or simply ridiculous, but as ruminant animals whose multiple stomachs use bacteria to help break down tough plant material, cows … fart. A lot. A single cow can put out over 200 pounds of methane in a year and as a whole, domestic cattle account for more than a third of all methane emissions from human activity. And yes, this counts as human activity, even when it's being propelled out the backside of cows. The simplest way to reduce this assault on the environment is to reduce the number of cows. However, there are ways to preserve the burger supply while still reducing greenhouse gases. And a new one involves feeding those cows something they're unlikely to run into in the average field: seaweed.

While it may seem impractical to either graze cattle in coastal bays or send train-loads of red seaweed across the country to cattle feedlots, the good news here is that the seaweed doesn't have to completely replace grass or grain to have the beneficial effect. In tests performed at Australia's national science agency CSIRO, feeding cows a diet that included just 0.2% red seaweed reduced methane production by 98%. Since the average cow eats about 55 pounds of food per day on a dry basis, this means their intake of the red macroalgae would be only about a tenth of a pound, making the amount of the red seaweed required seem remarkably possible.

It does this while actually helping cattle to use their other food more efficiently because it helps to optimize the process by which bacteria ferment grain and grass. So the cattle gain weight faster while producing less gas.

And there's a secondary benefit: Raising the seaweed itself might also be good for both the air and the water. CSIRO has worked out methods where, done properly, growing red seaweed can itself help to sequester additional carbon and help reduce ocean acidification.

All of this makes red seaweed a big improvement over other proposed supplements, which reduce methane by only 20-40% while requiring that the supplement be a much higher percentage of the cattle's diet. Or, in the case of Pennsylvania State research, requires feeding cattle a chemical supplement.

Previous research has also demonstrated success in growing related red algae in brackish ponds in areas as far north as Sweden. This opens the possibility that the necessary amounts of the supplemental plant might be not require shipment from coastal areas into cattle-raising regions of the interior—which would itself be a source of greenhouse gases. Instead, the relatively small amounts of the seaweed required might be raised in pools or ponds close to the necessary locations.

Asparagopsis taxiformis will definitely not solve the way that cattle take up almost a quarter of all ice-free land. It won't address the trillions of gallons of water they consume each year. It won't do much to make the grain that now goes to cattle available to hungry human beings. But if the data from field research holds up, it might reduce the greenhouse gas output from cattle by a genuinely significant amount while opening up a new industry that itself could help to sequester additional carbon. And that's something.

This is early research. The benefits might be much less dramatic on a large scale and, just as we've seen with recent vaccine trials, expansion of this research on a large scale means taking careful steps to make sure that this application is safe for the areas of sea where the red macroalgae is grown, the cattle that eat that macroalgae, and the humans who eat the cattle (or consume their dairy products).

What is in the actual Green New Deal is a drive toward agriculture that's genuinely sustainable and compatible with maintaining a low-carbon footprint. That call for sustainability is repeated in Joe Biden's policies. Exactly what shape a sustainable system ultimately takes is something that will be worked out by farmers, by regulators, by researchers—and perhaps most of all, by consumers. That red macroalgae from the sea might turn out to be a part of the solution for cattle raised on Midwest farms might seem like a reach, but it could also turn out to be part of how understanding the planet as a whole helps us deal with one of the many moving parts of the overall picture.