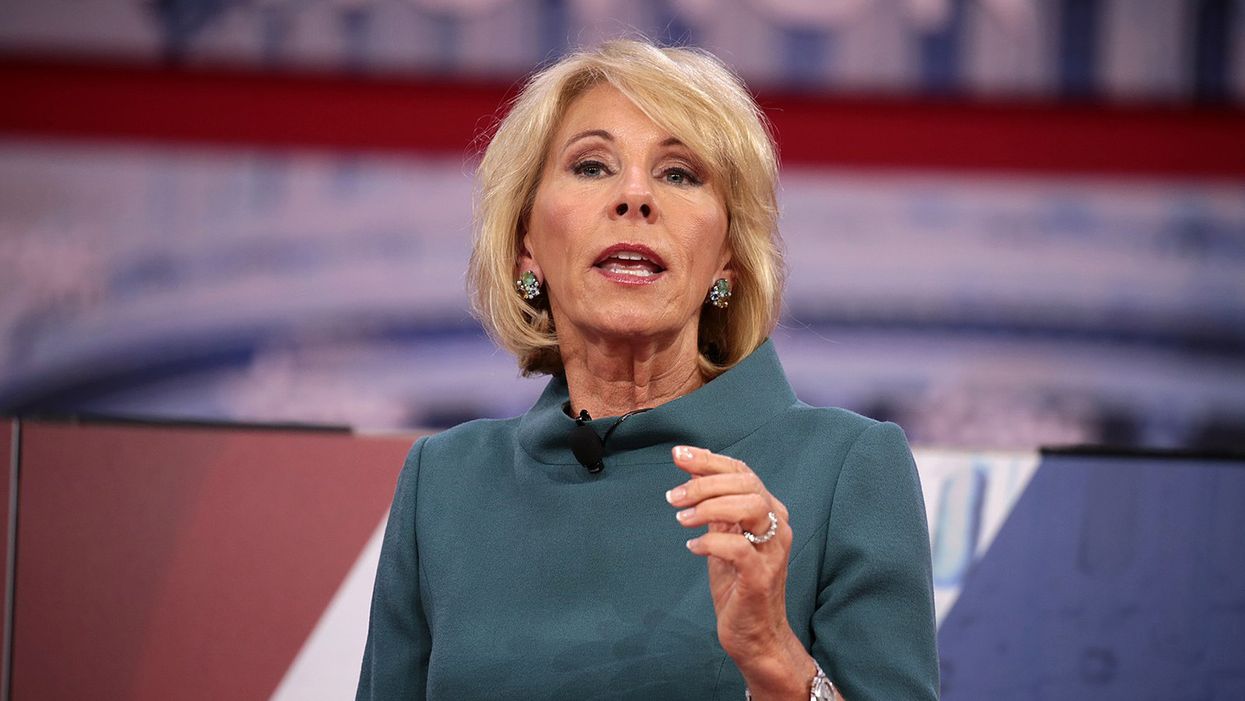 One of the many good things about a new president is that most, if not all, of the people one associates with the last president leave office. That includes the secretary of education, Betsy DeVos. DeVos came into her position, like most of the Trump Cabinet, based on either being a billionaire or having close relationships with billionaires. Like most billionaires, DeVos has been successful at one thing: Making a billion dollars. In order to make a billion dollars, one must be willing to crush a lot of bones to make one's bread. Like the rest of Trump's appointments, DeVos' four years have been marred by controversy and corruption, an almost unprecedented level of protest from students and educators, but most importantly by a complete incompetence in the job she was gifted. In a nutshell, she is arguably the worst secretary of education we've seen in decades.

However, being a billionaire, as the Trump administration has shown us time and time again, usually means that a person is good at rigging an already inequitable system and then exploiting that system. In fact, they aren't very good at doing much of anything besides making themselves wealthier by any means necessary. To do this, billionaires will participate in all kinds of dubious and frequently seemingly illegal things. And because they're billionaires in a rigged system, they can create laws or withstand inadequate punishments for doing the kinds of things that would sink the rest of the population. Things like collecting loans from defrauded students. Things like dodging taxes.

As Newsweek reports, DeVos' family yacht, the SeaQuest, is a foreign vessel in American waters. In fact, according to the report, the 164-foot vessel flies the Cayman islands flag even though it seems to hang out all the time in the United States. In fact, when DeVos' family boat was moored at the Huron Boat Basin in 2018, the $40 million floating luxury item was reportedly untethered by an unknown suspect or suspects. The Huron Boat Basin is in Ohio. No, not the famous Ohio Cayman Islands you've never heard about—the Ohio in the United States that's near Indiana and stuff.

When buying a vessel or cruising in U.S. waters, American yacht owners like the DeVos family could face state sales or use taxes like those most nonyacht owners face on everything else. However, registering a yacht in a locale like the Caymans—under what has come to be known as a "flag of convenience"—allows those American yacht owners to effectively characterize themselves as foreigners for tax purposes, thereby avoiding the obligation of paying the standard levies.

Good news is that the DeVos family fleet consists of nine more big fancy yachts. So they're like, screwing tons of American states out of taxable revenue that could help with things like … education. According to the Capital & Main, SeaQuest at $40 million could fetch Michigan—where the DeVos family company RDV is located—$2.4 million in taxes. But there are other very fancy reasons that fancy people like the DeVos clan register as foreign seafarers: Fewer law and order and regulations on the exploitation of humans.

"If someone is buying a boat that is above 300 gross tons but below 500 gross tons, getting registered offshore means they can avoid being subject to U.S. Coast Guard inspection and certification requirements as either a 'seagoing motor vessel' or a 'passenger vessel,'" said maritime attorney Mark J. Buhler. "The most commonly used offshore yacht registries have comprehensive large yacht safety codes that were specifically developed for large yachts, whereas the U.S. Coast Guard regulations and inspection requirements applicable to 'seagoing motor vessels' or 'passenger vessels' were created many years ago, principally for vessels engaged in trade, and not really having large yachts in mind. Those requirements do not translate well to yachts, and most yachts are simply not designed or built to those particular standards."