'We did it!': Crowd erupts with joy as Argentine Senate passes bill to legalize abortion 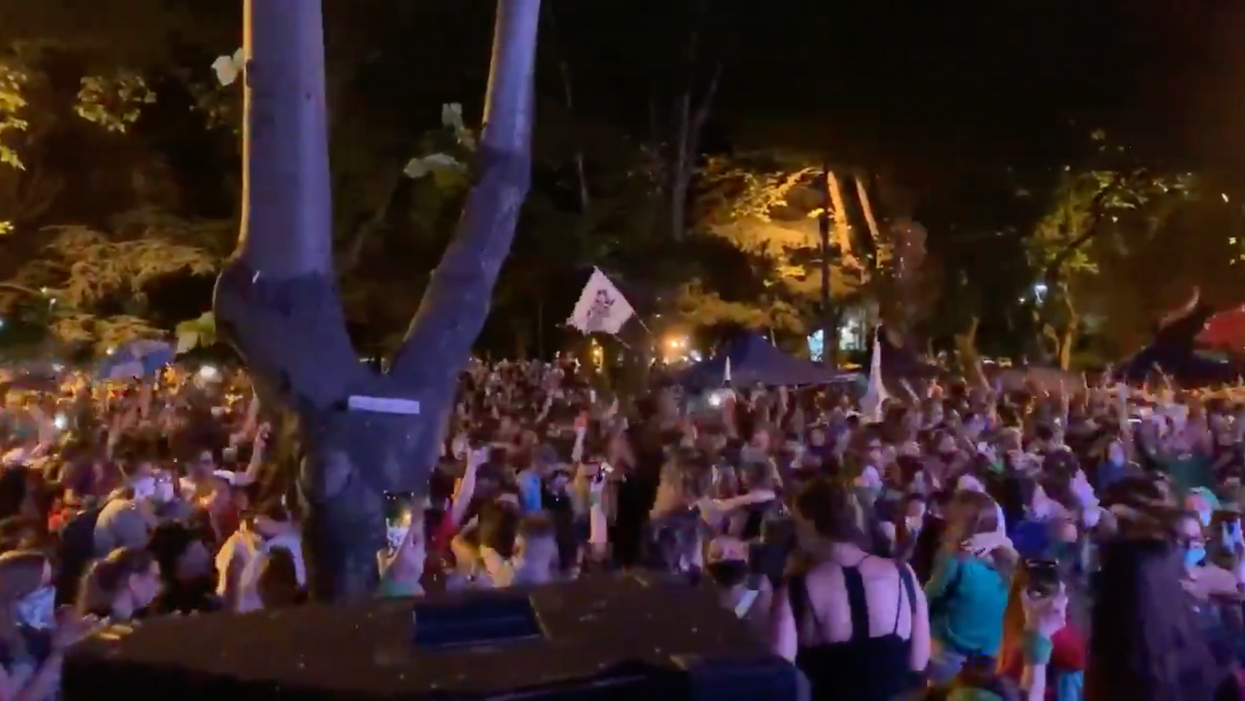 Thousands of women gathered in Buenos Aires erupted with joy early Wednesday after Argentina's Senate voted to approve legislation that would legalize abortion, the culmination of a years-long grassroots fight for reproductive rights in the Latin American nation.

The bill permitting elective abortions up to the 14th week of a pregnancy passed by a vote of 38 to 29, and President Alberto Fernández has vowed to sign the measure into law—a move that would make Argentina the largest Latin American country to scrap its strict anti-choice laws.

News of the vote was met with jubilant celebration among those who rallied in Argentina's capital city in support of the legalization bill. As The Guardian reported, "Women screamed with delight, sweeping their friends into tight hugs and jumping in ecstasy. Many wept tears of joy. Victory music kicked in and green smoke filled the air. A triumphant message flashed up on a big screen above the joyful crowd: 'We did it!' it said. 'ES LEY!' (IT'S LAW!)."

"I'm very emotional," a 25-year-old demonstrator told The Guardian. "There are no words to describe what your body feels after fighting for something for so long. I cried a lot, which I wasn't expecting."

Mariela Belski, executive director of Amnesty International Argentina, said in a statement that Wednesday's vote is a landmark "victory for the women's movement in Argentina, which has been fighting for its rights for decades."

"Now, people who decide to terminate their pregnancy will have a safe, high-quality service," said Belski. "Today we have grown as a society. Amnesty International is going to work to ensure that the state guarantees compliance with legal abortion throughout the country."

Amnesty summarized the key elements of the newly passed bill:

Erika Guevara-Rosas, Americas director at Amnesty International, said Argentine lawmakers' passage of the legalization bill sends "a strong message of hope to our entire continent that we can change course against the criminalization of abortion and against clandestine abortions, which pose serious risks to the health and lives of millions of people."

According to the latest data from Argentina's Health Ministry, around 40,000 women were hospitalized in 2016 for complications related to unsafe clandestine abortions. Human Rights Watch noted in an August report that "in 2018, Argentina's National Health Ministry reported 35 deaths resulting from abortion, including ectopic pregnancies, miscarriages, medical abortion, and failed attempt of abortion, representing more than 13 percent of all maternal deaths that year."

The New York Times reported early Wednesday that "the effects of the legalization vote are likely to ripple across Latin America, galvanizing reproductive-rights advocates elsewhere in the region and leaving them hopeful that other socially conservative nations could follow suit."

In a tweet following the vote, Fernández—who campaigned for the presidency on a platform that included reproductive rights—wrote that "today, we are a better society that expands rights to women and guarantees public health."