UN chief at climate summit: 'Can anybody still deny that we are facing a dramatic emergency?' 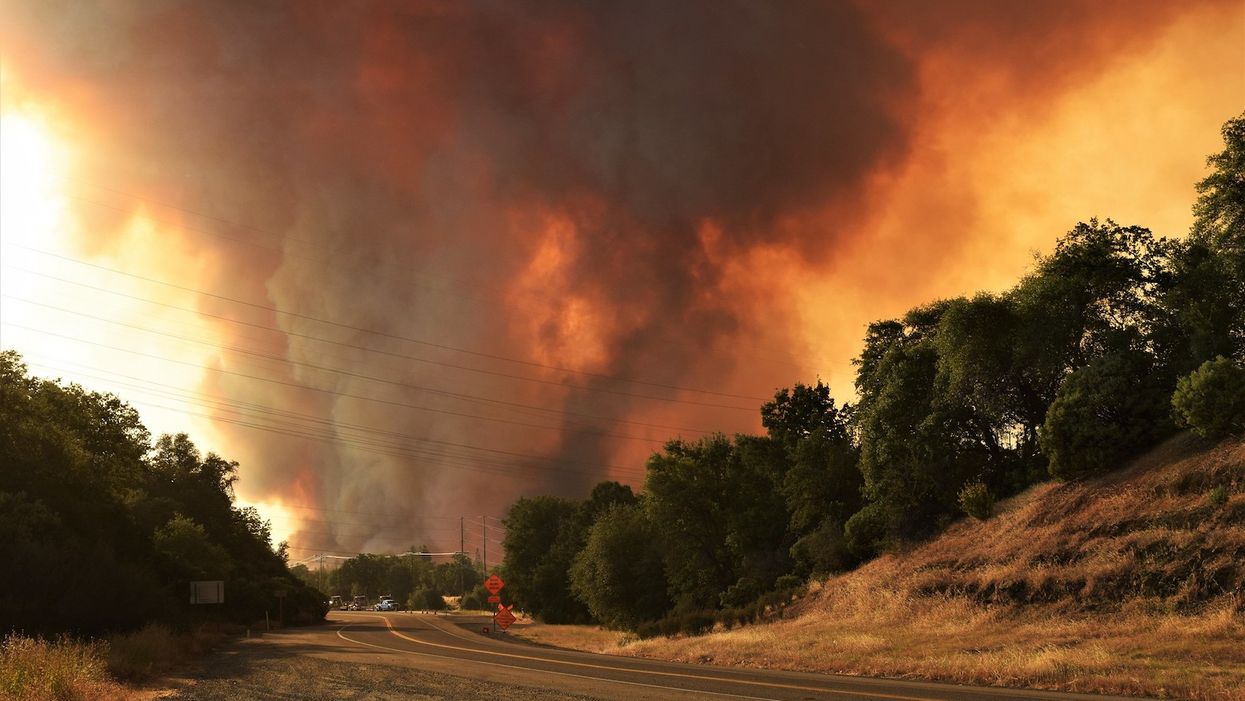 The Carr Fire is a 2018 California wildfire that burned in Shasta and Trinity counties.// Photo by Eric Coulter, BLM
Jessica Corbett
and
Common Dreams
December 13, 2020

That seemed to be the main message of United Nations Secretary-General António Guterres' speech on Saturday at the Climate Ambition Summit 2020, hosted by the U.N., the United Kingdom, and France in partnership with Chile and Italy to mark the fifth anniversary of the Paris agreement.

"Paris promised to limit temperature rise to as close to 1.5 degrees as possible. But the commitments made in Paris were far from enough to get there. And even those commitments are not being met," Guterres said. "Carbon dioxide levels are at record highs. Today, we are 1.2 degrees hotter than before the industrial revolution. If we don't change course, we may be headed for a catastrophic temperature rise of more than 3 degrees this century."

"Can anybody still deny that we are facing a dramatic emergency?" he asked. "That is why today, I call on all leaders worldwide to declare a State of Climate Emergency in their countries until carbon neutrality is reached. Some 38 countries have already done so, recognizing the urgency and the stakes. I urge all others to follow."

Can anybody still deny that we are facing a dramatic emergency? "Climate action is the barometer of leadership in… https://t.co/EWe3eGhXT3
— Inger Andersen (@Inger Andersen)1607790392.0

Scores of government and business leaders from across the globe joined Saturday's virtual event, which followed the recent release of a series of alarming U.N. climate reports and came ahead of the U.K.-hosted COP26 in Glasgow—postponed until next November because of the ongoing coronavirus pandemic.

Despite the need for urgent, ambitious action, "the dozens of leaders who spoke mostly offered tweaks to existing commitments or promises of bolder moves before crucial talks in Glasgow in late 2021, rather than breakthrough new policies to hasten the end of fossil fuels," Reuters reported.

Echoing a key takeaway from The Emissions Gap Report 2020, the latest edition of an annual publication from the U.N. Environment Program published Wednesday, Guterres said it is "unacceptable" that governments are giving Covid-19 relief and recovery money to polluters rather than fully committing to setting "our economies and societies on a green path in line with the 2030 Agenda for Sustainable Development."

"This is a moral test," he said. "Every country, city, financial institution, and company needs to adopt plans to reach net zero emissions by 2050—and start executing them now, including by providing clear short-term targets. Key emitting sectors such as shipping, aviation, and industry must also present and implement new, transformational roadmaps in line with this goal."

"Technology is on our side. Sound economic analysis is our ally. Renewable energy is getting less expensive with every passing day," the U.N. chief continued. "Climate action can be the catalyst for millions of new jobs, better health, and resilient infrastructure. But let us remember that this transition must be just."

At the summit, "a total of 75 leaders announced 45 renewed pledges to cut emissions, 24 net zero commitments, and 20 adaptation and resilience plans," according to Bloomberg Green. "It is not enough and the clock continues to tick," warned COP26 president Alok Sharma. "The choices we make in the year ahead will determine whether we unleash a tidal wave of climate catastrophe on generations to come."

While some of the climate action plans put forth by the summit's participants were criticized as not bold enough, the Associated Press noted that some major economies were totally absent from the event. Australia, Brazil, Indonesia, Mexico, Russia, and Saudi Arabia were not at the summit.

The Trump administration also declined to participate, but "American representatives at the virtual meeting included Michigan Gov. Gretchen Whitmer, Gov. Charlie Baker of Massachusetts, and U.S. business leaders, such as Apple chief executive Tim Cook," according to the AP.

Although President Donald Trump formally withdrew the United States from the Paris agreement the day after the November election, President-elect Joe Biden—who won support from climate action advocates leading up to his defeat of Trump—on Saturday reiterated his commitment to returning to the accord.

"The United States will rejoin the Paris agreement on day one of my presidency," Biden said. "I'll immediately start working with my counterparts around the world to do all that we possibly can, including by convening the leaders of major economies for a climate summit within my first 100 days in office."

"We have before us an enormous economic opportunity to create jobs and prosperity at home and export clean American-made products around the world, harnessing our climate ambition in a way that is good for American workers and the U.S. economy," added Biden, who served as vice president to President Barack Obama.

Biden recently appointed John Kerry, the former secretary of state under Obama who helped craft the Paris agreement, as his climate envoy—a move welcomed by Guterres but met with mixed reactions from climate campaigners in the United States.

In the midst of the summit, U.S. advocacy groups and progressive politicians issued renewed demands for bold action to address the planetary emergency, with some calling for a Green New Deal:

Writing for his newsletter The Phoenix on Friday, journalist and meterologist Eric Holthaus declared that "limiting warming to less than 1.5°C is an existential necessity. Joe Biden won't get us there on his own, but he could make a transformative leap in the right direction."

"The Covid pandemic turned back the clock on emissions worldwide. But it's changed nothing—yet—about the problem that got us here: Extractive capitalism working in partnership with white supremacy, patriarchy, and imperialism," Holthaus wrote. "To change everything, we need everyone healthy, valued, and loved."

"That means NOW IS A SUPER IMPORTANT TIME," he added. "If we return to business as usual post-Covid, it will be a disaster that may be unrecoverable. Climate change needs to be at the heart of every country's recovery plans in 2021."