Somewhere in his journey to power in Hungary, Prime Minister Viktor Orbán had a radical religious conversion.

An atheist when he started in politics in the late 1980s, Orbán now calls himself a defender of Christianity. In an August speech commemorating the 1920 Treaty of Trianon – a traumatic event in which Hungary lost much of its territory – Orbán argued that Western Europe had given up on “a Christian Europe" and was choosing instead to experiment with “a godless cosmos, rainbow families, migration and open societies."

As experts in European politics and the religious right, we argue that Orbán's embrace of religion has served to consolidate his power, “other" his opponents and shield Hungary from EU criticism of its attacks on the rule of law.

It is also, we believe, a dangerous model for how religion can be used to fuel democratic backsliding.

In 2014, during an address to the nation, Orbán spoke of building “an illiberal state, a non-liberal state," in Hungary. While an illiberal state is an ambiguous concept, Orbán praised it as better able to protect Hungary's national interests and preserve its cohesion. Four years later, his tone had shifted: Hungary was now a “Christian democracy."

Such a shift is emblematic of Orbán's career, with its many ideological twists and turns. He has changed his tune on many major issues, from being a firm supporter of European integration to becoming a strong defender of national sovereignty. He has befriended Russian President Vladimir Putin since his return to power in 2010, despite his past anti-Russian stance.

And he renounced his past atheism during the 1990s – a decision that went hand in hand with his courting of religious and conservative voters. According to European politics scholar Charles Gati, “no European leader since Napoleon may have changed his spots more."

Far from consistently adhering to clear principles, Orbán, according to The Economist, over the years has instead been “dedicated to the accumulation and maintenance of power."

That ruthlessness grew after Orbán was voted out as prime minister in 2002. Deeply shocked by this turn of events, he vowed not to lose power again if he ever returned to office.

During the 2010 election campaign, Orbán declared that “we need to win only once, but need to win big" – an apparent warning that he would use any large electoral victory to strengthen his position, so not to have to relinquish power. Cynically claiming the mantle of Christian Democracy, according to Princeton scholar Jan-Werner Mueller, became a key tool of his strategy in the following decade to consolidate his grip on Hungarian politics.

Like much of Europe, Hungary is somewhat secular. In the 2011 census, 45% of the population did not list any religious affiliation. Hungary's communist regime had certainly scorned and discouraged religion for many decades. After the 1989 fall of the Iron Curtain dividing Europe between the communist Eastern bloc and free market West, people did not flock to churches.

Nonetheless, when Orbán returned to power in 2010, he began to rely on religion to mobilize voters. For instance, he framed his harsh anti-immigration policies as a defense of Christianity.

As the Syrian civil war reached a crescendo in 2015, hundreds of thousands of migrants fled the violence. Although most migrants to Europe were trying only to transit through Hungary, Orbán declared that Syrian migrants were trying to invade the country and change its culture and religion. Officials of Orbán's party, Fidesz, have echoed these claims over the years, suggesting Muslim refugees are trying to impose their culture and establish a caliphate on the continent.

For a country with a history of invasion that stretches from the sacking of cities by Mongols through the Nazi invasion in 1944 and Soviet occupation, the terminology raised fear and unease.

Orbán has also resurrected older anti-Semitic conspiracy theories about Jews and leftists to consolidate his Christian credentials, such as sponsoring exhibits implicitly associating communists with Jews. It has also helped to cement an “us or them" narrative in which opponents of Orbán are “othered." To do this, Orbán chose billionaire philanthropist George Soros as his major foil.

Soros, who is Jewish, was born in Hungary. He went into hiding during the Holocaust and fled the country once communists took control. After the Iron Curtain fell in 1989, Soros donated millions of dollars to Hungary's fledgling civil society.

Yet he was easy to demonize for some Hungarians, not only because he was Jewish, but because he had spent most of his adult life outside the country. In the 2019 European Parliament elections, a government tax-funded campaign attacked Soros and then European Commission President Jean-Claude Juncker, accusing them of using migration plans to undermine Hungary's security.

The year before, during the 2018 Hungarian elections, Orbán used even more explicit anti-Semitic undertones to attack Soros: “We are fighting an enemy that is different from us. Not open, but hiding; not straightforward, but crafty; not honest, but base; not national, but international; does not believe in working, but speculates with money."

The continued erosion of the rule of law in Hungary, including attacks against the free media and the independence of the judiciary, is a long-standing concern for the European Union.

But Orbán has, up to now, skillfully taken advantage of the EU's divisions and weaknesses to avoid any major consequences for his country's democratic backsliding. He has conveniently used Christianity as a shield to deflect and delegitimize the criticisms from Brussels.

Orbán also invokes Christianity to court allies, close and far. This has been the case with solidifying the alliance with Hungary's conservative neighbor Poland. Orbán, after all, understands the importance of close friends in the EU. Not only can they help to counter policies he objects to, but major rule of law sanctions in the EU require unanimity. Poland and Hungary can thus provide cover for each other.

Finally, Orbán has also made use of Christianity, highlighting Hungary's policies to help persecuted Christians, to build ties with key players beyond Europe. It is noteworthy that Orbán was the only EU leader to attend the inauguration of the right-wing Jair Bolsonaro in Brazil in 2019. And the Hungarian government has gone out of its way to court religious conservatives and conservative nationalists in the United States.

In many respects, Viktor Orbán's use of religion is no different from Ronald Reagan's embrace of Christian evangelicals in the late 1970s. Both leaders relied on religious imagery to build bigger voting coalitions. 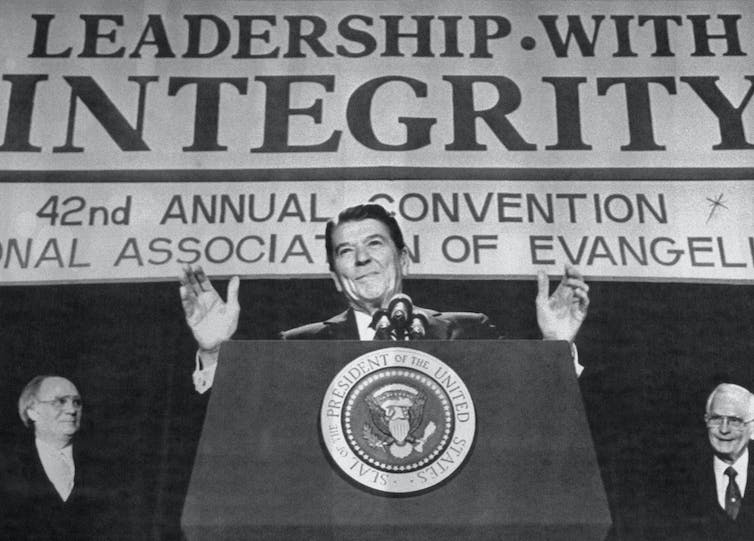 Orbán is far from the first leader to use religion to increase his base.

Every Republican candidate for president since has tried to appeal to evangelicals and invoked Christian values. And even ham-handed attempts such as those by President Donald Trump have done little to undermine such unions.

Such an embrace of religious groups is not in itself a problem. But calculated uses of religion to attack domestic and foreign opponents, or to weaken democratic checks and balances, is, we believe, a major concern. Orbán's Hungary provides a clear warning of how easily Christianity can be distorted and used to erode democracy.