Fighting for reality: 73 million Americans just voted for a delusional fantasy. Our only choice is to defeat them 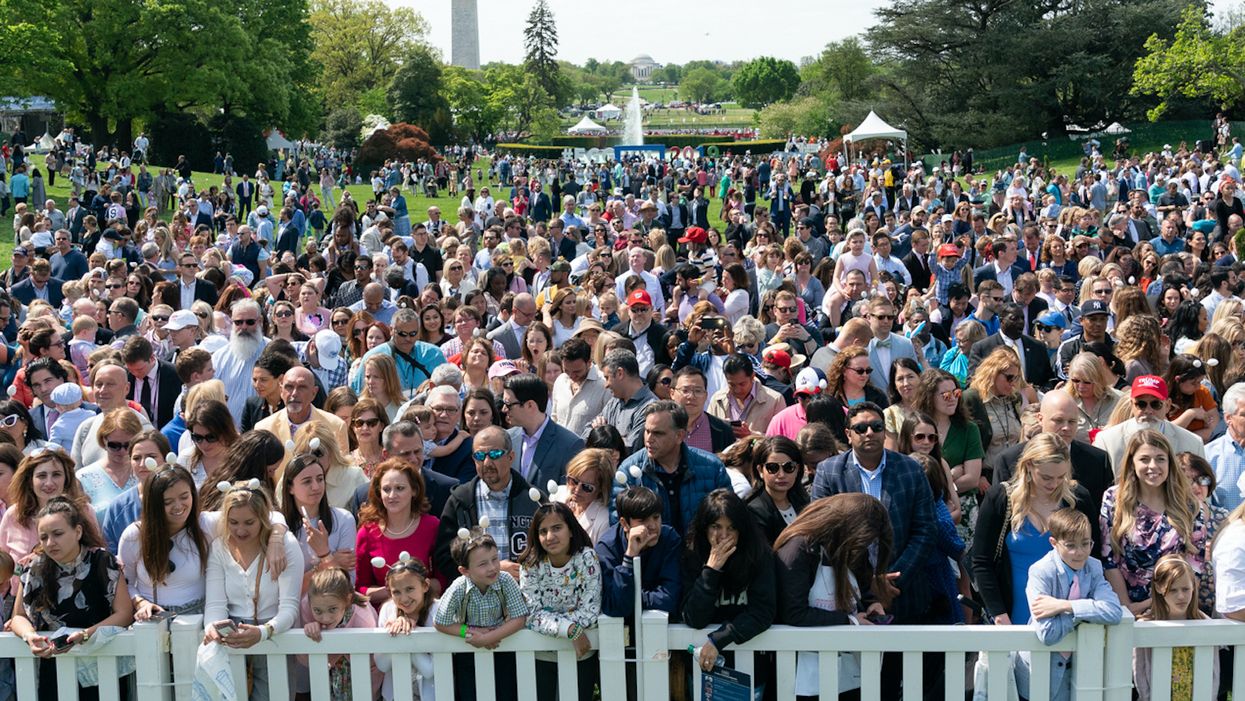 There's a visual image I'd like you to embed in your mind, to be wheeled out whenever you might feel even the slightest bit complacent about the incoming Biden administration. For many of us, it's impossible to forget.

Back in April, Columbus Dispatch photographer Joshua Bickel snapped an unforgettable image of Trump supporters — no distancing, eyes vacant and maskless mouths agape — protesting the COVID protocols in Ohio during the first major spike in cases. Bickel stood inside the lobby of the Ohio Statehouse in Columbus while the protesters shrieked and chanted outside, pounding on the locked doors. It looked almost exactly like that scene in "Shaun of the Dead" in which Simon Pegg and the rest of the cast is trapped inside the Winchester Pub with a large gaggle of zombies pressed against the front door.

It's perhaps the best illustration of the political stakes following Joe Biden's decisive and, by Donald Trump's own standards, landslide victory. While the ousting of Trump was fantastic news for the preservation of the American republic and the national values we cherish, it's become abundantly clear that the Red Hat cult isn't going anywhere. In fact, Trump managed to add millions of voters to his army of suckers.

Given the relentless horror show we've experienced since Trump was inaugurated, it should be supremely worrisome that he actually gained voters — 11 million more than in 2016, so far — and it happened in the midst of an uncontrolled and incompetently mismanaged pandemic that has killed nearly a quarter-million Americans, manifesting the steepest downturn in the economy since forever. And that's just the most recent disaster. We could be here all day listing the tens of thousands of other disasters, including the fact that Trump was impeached and put on trial for attempting to cheat in the election while running sadistic, for-profit internment camps for children — at least 666 of whom have reportedly been permanently separated from their parents.

If four years of suffocating madness didn't convince Trump's followers to abandon their messiah in droves, I seriously doubt that traveling to Midwestern diners and talking to them about health care or economic anxiety will change their badly deluded, badly brainwashed minds. They are unreachable. Seventy-three million Americans have gone bye-bye, hoodwinked by an unstable con man and the conservative entertainment complex that backstops him.

They're so unwaveringly devoted to their supreme leader that they've refused even acknowledge the results of the election, despite the fact that Fox News was one of the first to call Arizona for President-elect Joe Biden, while eventually calling the entire race for Biden. I get that they're upset, but it's entirely possible to be devastated about the results while acknowledging the reality of the numbers. That's what grownups do. But as long as Trump continues to pitch the world's most gargantuan hissy-fit, insisting he won the election, his fans will follow.

As I've written before, we've entered a dangerously precarious age in American politics in which the debate is no longer right versus left. Today, we're fighting a cold war between the forces of reality and the forces of fiction. Here. In America. On one side, there are 79 million of us who recognize things like math, science, history, expertise and the difference between "your" and "you're." On the other side is a movement of 73 million Americans whose entire worldview is based upon whatever counterfactual gibberish Trump farts into the world, along with the exact opposite of whatever the other side says. Trump supporters don't have an agenda as much as they have the politics of "nuh-uh." The politics of impotent rage. The politics of tall tales.

The other day, an emergency room nurse from South Dakota published a revealing Twitter thread about her Red Hat patients:

The ones that stick out are those who still don't believe the virus is real. The ones who scream at you for a magic medicine. ... All while gasping for breath on 100% Vapotherm. They tell you there must be another reason they are sick. They call you names and ask why you have to wear all that "stuff" because they don't have COViD because it's not real. ... And then they stop yelling at you when they get intubated.

Again, reality versus fiction. Trump supporters are so utterly devoted to the horseshit of Trumpism that they deny reality even as it's killing them.

The nurse's observations are backed up by what we observed during the so-called "Million MAGA March" on Saturday. It goes without saying there wasn't any social distancing, but there weren't any masks, either. Obviously. Why not? According to one Trump voter interviewed by ABC's Martha Raddatz, the virus can go right through a mask. (No, it can't.) So, naturally, the Red Hats in attendance acted as though they were immune, just like the alleged "immunity" of their cult leader. Proud Boys engaged in full-contact initiation rituals while other maskless disciples accosted reporters and cameramen documenting the event. The truth is that the "Million MAGA March" will surely end up causing a large and potentially deadly spike in COVID infections, and dozens upon dozens of the reckless, irresponsible attendees will soon be intubated in crowded ERs somewhere, separated from their families at Christmastime — but hey, at least they can wheeze "Merry Christmas" now. Thanks, Trump.

Likewise, at least two QAnon believers are headed to Congress in January. Not surprisingly, they're also Trump-supporting Republicans, and at this point the Republican Party has made no effort to distance itself from these knuckleheads who believe that there's a deep state of pedophiles and blood-drinkers running the government. They believe John F. Kennedy Jr. is still alive. They believe mass shootings are false flags. They make Alex Jones look like Walter Cronkite, and they're not going anywhere.

Meanwhile, the "reality" side of this new paradigm, centered in and around the Democratic Party, has to be supremely vigilant moving forward, given that the fiction side is pounding on the door, waiting to reacquire the White House and to expand its reach in Congress. Never forget what's happened here. It's immensely important that we're fully cognizant of this movement of Trump adherents, even after their guy is dragged out of the White House on Jan. 20.

The usual suspects will try to convince us that Democrats should somehow engage with them, but engagement is nothing but an archaic exercise in futility. Democrats from the Lincoln Project on the right all the way to the AOC and Elizabeth Warren progressives on the left have no choice but to refocus this newly coalesced, reality-based big tent away from trying to convince the unconvinceable and instead focus on winning as many elections as possible, starting with the Senate runoffs in Georgia in early January. Sure, all campaigns are about winning, but many more of us have to reprioritize winning as a primary goal — to embrace it and pursue it as our political destiny — to overwhelm the vote and win elections by any legal means.

Because through great pain and suffering, we have learned what the alternative will look like.

So, how do the reality-based Normals keep the Red Hats far away from the levers of power in the long run? Exit polls indicate that 14 percent of voters who cast ballots this year had never voted before. Among those first-timers, 64 percent voted for Joe Biden. What's the strategic lesson here? From today forward, we have no choice but to engage in the nation's most aggressive 50-state voter registration drive ever, adding as many Democrats as possible. From there, it's all about getting out the vote: delivering all of those new voters to polling places or making sure they vote by mail. Overwhelm every election: state, local and national. It needs to be unrelenting. The alternative is gathered at the doors, shrieking for another chance to crush American democracy beneath the ungainly bulk of Trumpism. The moment we let up, they'll be back.

Our politics have changed, and not for the better. It used to be that if the other side won, there'd be a fierce battle on policy, but neither side would necessarily have to worry about the literal end of the republic or worse. Those days are over. The old strategies of engagement and appeasement are obsolete.

Perhaps one day in the future, we'll return to rational political conversations with our opponents based on factual reality, but it'll never happen as long as there are 73 million active voters who wanted four more years of Trump's ceaseless trolling and anti-democratic politics of death, destruction and paranoia. There's no reasoning with people who unquestioningly trust a brittle, desperate and obvious liar who'd rather tear down the integrity of our elections than concede like a grownup — like literally every losing presidential candidate in our history. The only thing that will keep idiocracy securely confined to the margins is to simply overwhelm, outnumber and outhustle the idiocrats. That means you, that means me, that means everyone inside the front door.