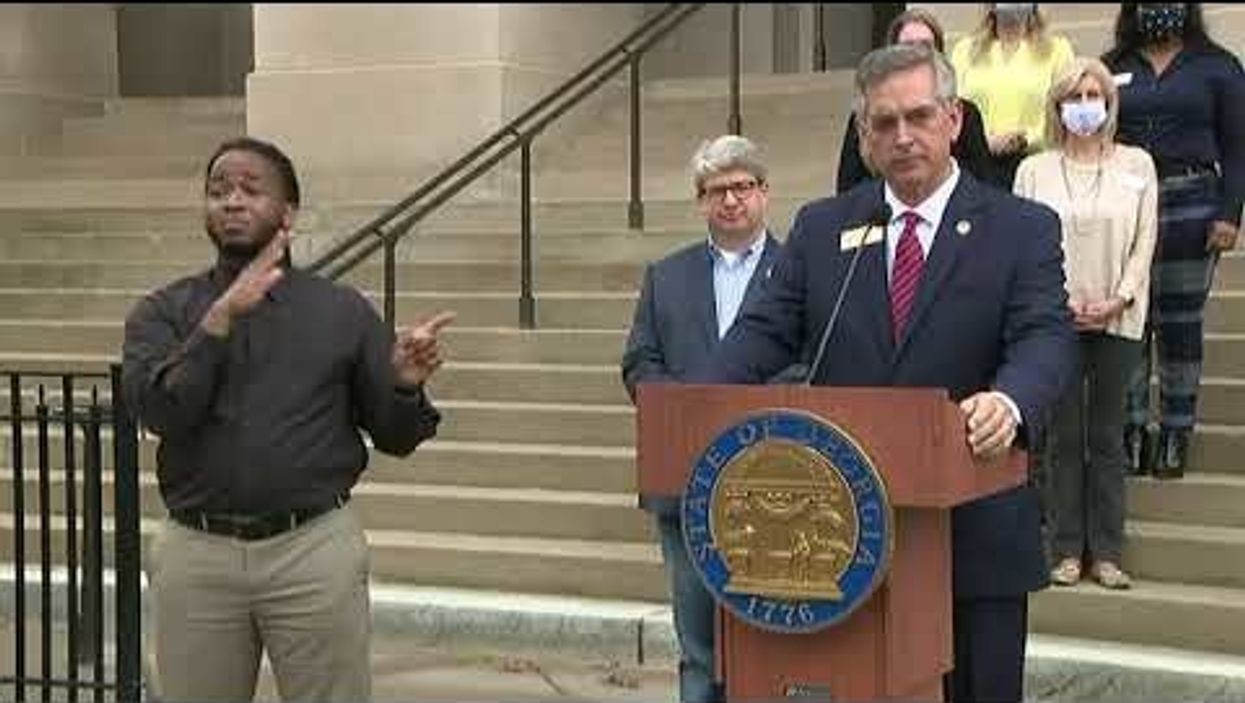 President Donald Trump is at it again with his embarrassing and desperate attempt to pluck votes from President-elect Joe Biden. This time, his campaign did it in the form of a petition for a recount in Georgia Friday, according to a statement The New York Times obtained from Trump's legal team.

"Today, the Trump campaign filed a petition for recount in Georgia," the Trump campaign said the statement. "We are focused on ensuring that every aspect of Georgia State Law and the U.S. Constitution are followed so that every legal vote is counted. President Trump and his campaign continue to insist on an honest recount in Georgia, which has to include signature matching and other vital safeguards. Without signature matching, the recount would be a sham and again allow for illegal votes to be counted. If there is no signature matching, this would be as phony as the initial vote count and recount. Let's stop giving the People false results." No, let's stop giving the president false hope.

Trump is insisting on this while his party’s two senators in the state are facing runoffs in early January.
— Maggie Haberman (@Maggie Haberman)1606017377.0

Jaclyn Rothenberg, Biden's Georgia communications director said in a statement to The Atlanta Journal-Constitution that last week's recount "reaffirmed what we already knew." "Georgia voters selected Joe Biden to be their next president," she said. "As the Secretary of State said, there is no reason to believe there are widespread errors or fraud and the Trump campaign has no evidence to back up their baseless claims. Any further recount will simply reaffirm Joe Biden's victory in Georgia a third time."

Sec. of State Brad Raffensperger certified election results showing Biden's historic win in the state Friday. Georgia had held what's known as a Risk Limiting Audit of its presidential contest last week. "Due to the tight margin of the race and the principles of risk-limiting audits, this audit was a full manual tally of all votes cast. The audit confirmed that the original machine count accurately portrayed the winner of the election," Raffensperger's office said in a news release.

Finding no evidence that voting irregularities significantly affected the vote count in Georgia, U.S. District Judge Steven Grimberg, who was appointed by Trump, by the way, rejected a GOP attempt to prevent state election leaders from certifying Biden's victory late Thursday, according to The Atlanta Journal-Constitution.

It was news Gov. Brian Kemp seemed unhappy about in a live-streamed video announcement Friday. "I join many in backing a hand recount and urging a thorough investigation into any voting irregularities," Kemp said. "The secretary of state oversaw a complete audit, which revealed significant errors made in several counties including Floyd, Fayette, Douglas, and Walton."

Only it didn't. There was less than a 500-vote difference between Biden's original victory margin and that of the recount. The original tally had Biden winning by 12,780 votes, and the recount showed Biden won by 12,284 votes. The takeaway? You guessed it. Biden won. But you have to love how the governor, who used to serve as secretary of state, is so willing to throw his own election officials under the bus to placate Trump.

It comes as no surprise when Trump attorney Sidney Powell does it. She called the previous recount a "total farce" on the conservative news website Newsmax. "Georgia's probably going to be the first state I'm going to blow up, and Mr. Kemp and the secretary of state need to go with it," she said, then started floating the usual conspiracy theories.

Ultimately, Raffensperger said in a statement CNN obtained Friday: "Because the margin is still less than 0.5%, the President can request a recount after certification of the results. That recount will be conducted by rescanning all paper ballots." And you know who will pay for this recount? Georgia taxpayers. Although state officials haven't released estimates of the total cost, in Georgia's largest county, Fulton, election officials estimate a recount could cost $200,000, NBC News reported.