'A coup is under way': Experts warn Trump and GOP leaders could unleash a wave of violence 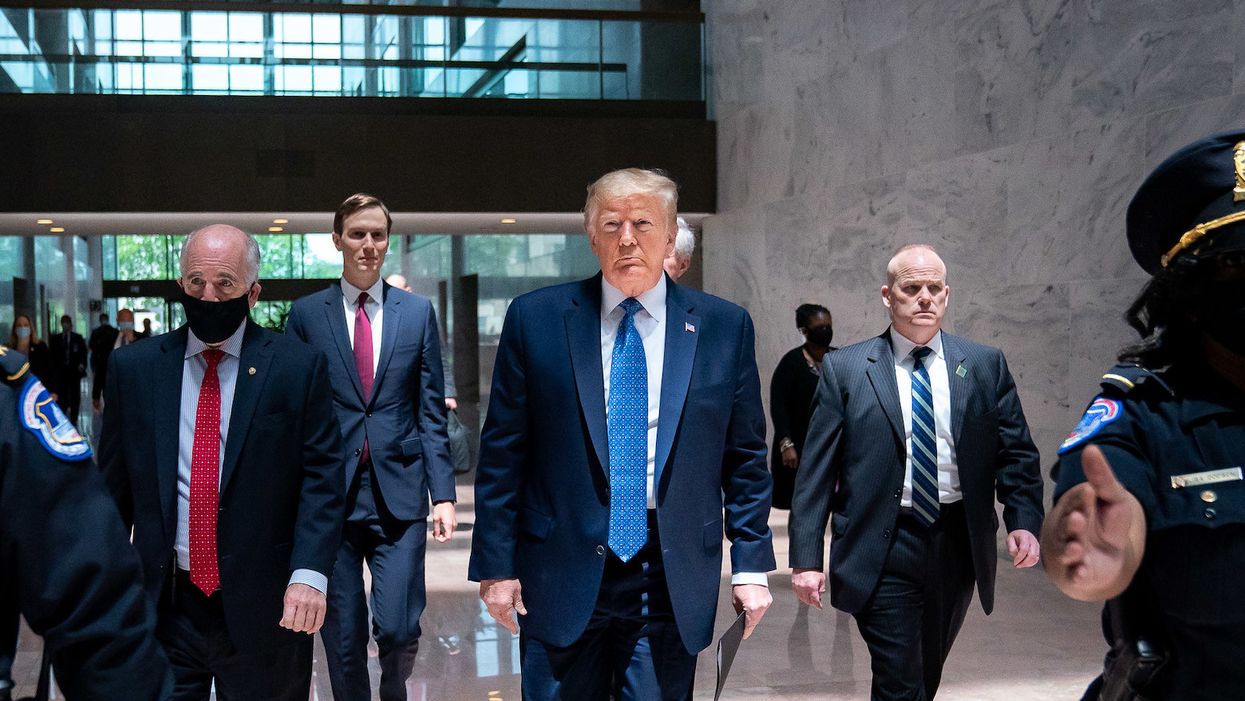 Historians and other experts on Thursday warned that President Donald Trump's attempt to remain in power despite his loss in the 2020 election is growing increasingly dangerous as Republican leaders willingly participate in the disenfranchisement of millions of voters and back the president's refusal to accept the election results.

In an op-ed at The Hill, journalist Albert Hunt wrote that Trump's "deceitful charge" that the Democratic Party stole the election and allowed "illegal votes" to be cast—claims that have yet to be backed up by evidence—"undermines confidence in our Democratic system, but it could also threaten to unleash a dangerous wave of violence."

Quoted in Hunt's piece, white supremacy and terrorism expert Kathleen Belew, a history professor at the University of Chicago, warns that after Trump's courting of violent white supremacist groups—in 2017 when he refused to denounce neo-Nazis at a rally in Virginia where an anti-racist protester was murdered, and weeks ago when he offered tacit approval of the Proud Boys at the first presidential debate—the president's rhetoric and actions in recent days "could also be invitation for drastic action and mass murder like the Oklahoma City bombing in 1995."

"If these white power advocates double down on the idea this was a rigged election, history tells us there will be major spikes in violence, deliberate attacks," Belew said.

The willingness of some on the far right to take violent action in order to defeat Trump's political opponents has been made clear in recent weeks. The FBI last month arrested more than a dozen people in connection with a plot to kidnap Michigan Gov. Gretchen Whitmer, a Democrat, over her government's coronavirus safety protocols, which have come under fire from Trump. Last weekend, as Americans across the country celebrated Trump's defeat in the election by President-elect Joe Biden, armed supporters of the president attended counterprotests, decrying so-called "illegal votes" and claiming the election had been stolen.

On Tuesday, actor and right-wing activist Jon Voight posted a video on social media which was retweeted more than 43,000 times, accusing "leftists" of corruption and calling on fellow Trump supporters to prepare for "our greatest fight since the Civil War."

"There will be a price to pay," Voight said. "The ones who are jumping for joy now are jumping toward the horror they will be in for... We must fight the corruption that has taken over... Let us fight this fight as if it is our last fight on Earth."

Twitter included a warning on the post saying it contained claims about "election fraud" that are "disputed."

"Everyone knows that when the federal courts repeatedly dismiss your claims of voter fraud as laughable bullshit, you can simply use a video of Jon Voight insisting it's all actually true," tweeted historian Kevin Kruse.

But Yale University history professor Timothy Snyder warned against laughing off what he called a clear attempt at a coup.

"Underestimating Donald Trump is a mistake that people should not go on making," Snyder wrote in the Boston Globe on Wednesday. "Laughing at him will not make him go away. If it did, he would have vanished decades ago."

Snyder outlined the steps, unprecedented in U.S. history but not in countries that have been recognized as authoritarian regimes, that Trump and the Republican Party have taken so far to undermine the will of American voters:

A coup is under way, and the number of participants is not shrinking but growing. Few leading Republicans have acknowledged that the race is over. Important ones, such as (Senate Majority Leader] Mitch McConnell and [Secretary of State] Mike Pompeo, appear to be on the side of the coup... The transition office refuses to begin its work. The secretary of defense, who did not want the army attacking civilians, was fired. The Department of Justice, exceeding its traditional mandate, has authorized investigations of the vote count. The talk shows on Fox this week contradict the news released by Fox last week. Republican lawmakers find ever new verbal formulations that directly or indirectly support Trump's claims. The longer this goes on, the greater the danger to the republic.

Snyder pointed to the assassination of centrist Polish President Gabriel Narutowicz in 1922—days after he won the presidency and after his victory was not accepted by right-wing nationalists—and claims by Nazis that Germany had lost the World War I due to a "stab in the back" by leftists and Jews, as historical precedents for the violence that could arise from Trump's claims, particularly if Republicans continue to support the president.

In a Twitter thread, Snyder expanded on the danger of assuming Trump's actions won't escalate to such violence in the United States.

"In an authoritarian situation, the election is only round one. You don't win by winning round one," Snyder wrote. "It is up to civil society, organized citizens, to defend the vote and to peacefully defend democracy."