Republican Marjorie Taylor Greene is the congressperson-elect of Georgia's heavily Republican 14th District, and is clear proof that the Republican Party is broken beyond repair. Greene is, in no uncertain terms, a virulent racist and dangerous, conspiracy-addled crackpot. She's one of several new Republicans to attach themselves to "QAnon," a conspiracy theory modeled closely on anti-Semitic propaganda claims of a powerful worldwide collection of elites who are harvesting the blood of children because reasons, and that these elites consist of George Soros, all Democrats, and every last enemy of Donald Trump, in government and out of it.

But it's not just that Greene is a QAnon promoter. That bit is only part of an extensive list of conspiracy claims Greene has adopted. Greene has made numerous racist videos and rants condemning Black and Hispanic Americans, Muslims, and Soros. She speculated that the Charlottesville rally of white nationalists that resulted in violence and the death of one counterprotester was an "inside job" meant to discredit the right, speculated that the Las Vegas mass shooting was staged by the government in order to justify new gun laws, and promoted "Pizzagate" claims of a Hillary Clinton-connected sex trafficking ring run from the basement of a pizza restaurant that has no basement. She adopted Seth Rich conspiracy theories alleging the Obama administration was secretly behind his murder.

Greene also claimed that there was no "evidence" of a "so-called plane" crashing into the Pentagon during the Sept. 11 terrorist attacks, and that President Barack Obama "is a Muslim" who "opened up our borders to an invasion by Muslims."

She is also willing to act on her conspiratorial delusions. She responded to House Speaker Nancy Pelosi's refusals to provide funding for Donald Trump's demanded "border wall" by accusing Pelosi of "crimes of treason" that are "punishable by death." In February of 2019 she filmed herself inside the Capitol attempting to harass Reps. Ilhan Omar and Rashida Tlaib, who she claimed were not legitimate congresspersons because they used the Quran to take their oaths of office rather than Bibles. 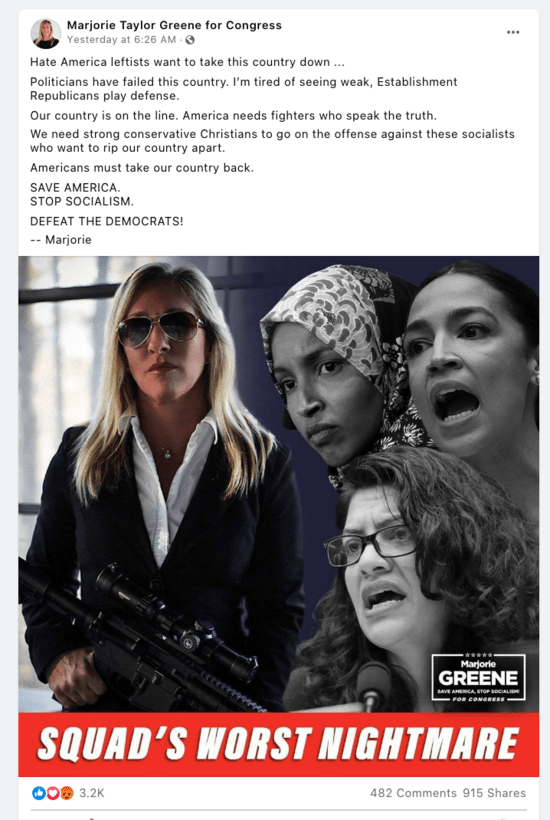 In September, Greene posted to Facebook an image of herself holding an assault rifle next to pictures of Reps. Rashida Tlaib, Alexandria Ocasio-Cortez, and Ilhan Omar, declaring that "Hate America leftists want to take this country down," and that "Americans must take our country back."

It is an error to say that Marjorie Taylor Greene is a QAnon adherent. Greene has been a conspiracy theorist on the level of Alex Jones about everything, QAnon-related or not, and has especially wallowed in racist, white nationalist, and militia claims from the far-far-right. Greene is an advocate for propaganda and fascism.

Despite her anti-Semitic, anti-Muslim, and racist conspiracy-peddling, however, Greene has not only not faced few Republican Party denunciations but was quickly embraced by the party. Donald Trump is especially enamored of her.

That is the state of Republicanism today. Violence-peddling conspiratorial racists are not only the party's target audience; they are the party itself. A generation of conspiracy peddling and win-at-all-cost propagandizing has resulted in the election of Republican lawmakers whose Republican foundations are the conspiracy theories past conservatives nurtured in their attempts to inflame the gullible.

Now Greene will be headed to Congress, though it remains to be seen whether she lasts a full term—or even a few months—before committing some breach requiring her expulsion. With that in mind, we check in on conservatism's "future Republican star" just after winning her election: