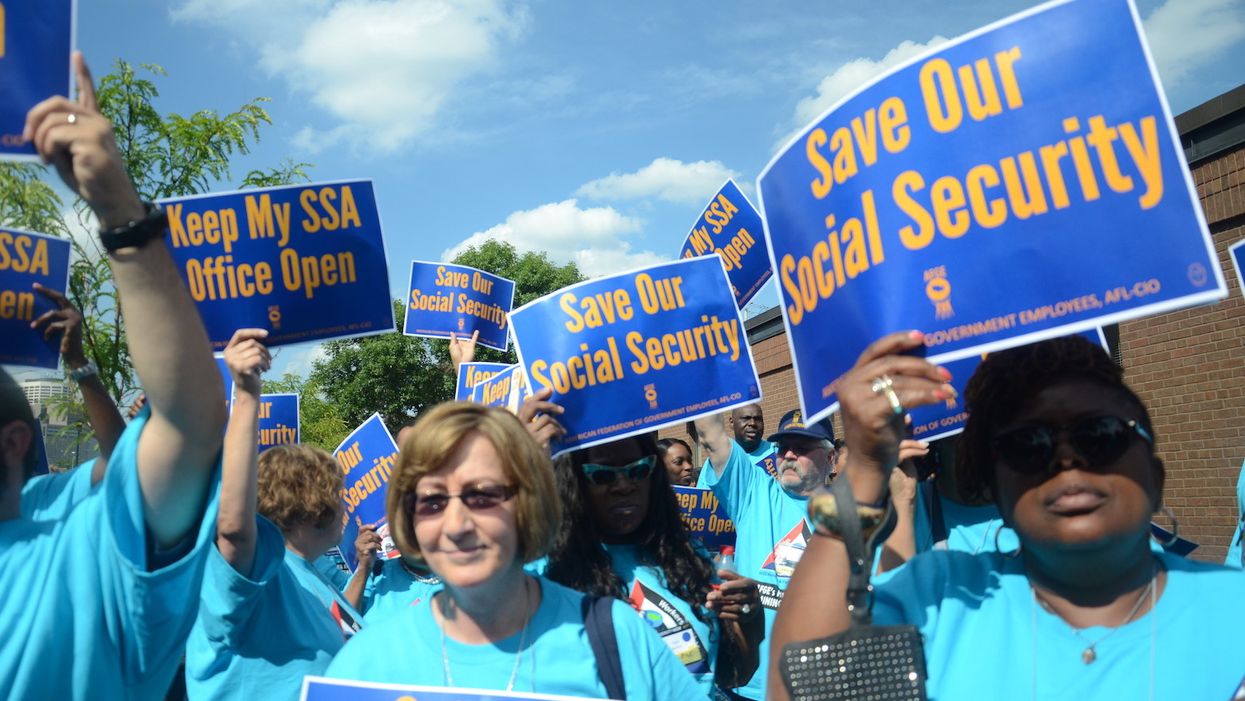 Hundreds of union activists from the American Federation of Government Employees (AFGE) rallied at the Minneapolis Social Security Field Office on Wednesday, Aug. 27 to shed light on the Social Security Administration's plan to close virtually every field office in Minnesota and across the country; limiting customer service options for American seniors and persons with disabilities. Credit: AFGE https://creativecommons.org/licenses/by/2.0/
There's a 3-pronged lie about Social Security that undermines the whole point of the program
Joe Maniscalco
and
DC Report
November 06, 2020

Calling them the "saviors of democracy," labor groups representing essential frontline workers in key battleground states say their members have put Joe Biden on track to win the White House—and that they're now prepared to beat back Trump administration efforts to steal the 2020 presidential election from the Democratic Party nominee.

On Wednesday, the day after the election, leaders from SEIU Healthcare Pennsylvania—part of the nationwide Service Employees International Union, the state group represents 45,000 caregivers—joined with Black Voters Matter, Our Future PA and other pro-labor, progressive organizations on the Harrisburg Capitol steps for a "Count Every Vote" rally. They plan to reassemble as outstanding ballots in Pennsylvania, Nevada, Georgia and North Carolina continue to be tabulated.

As of early Friday morning, Biden had taken a narrow lead in Georgia and was on the path to pass Trump in Pennsylvania.

'We know that we made a significant difference in Pennsylvania in this election.'

Pennsylvania AFL-CIO President Rick Bloomingdale and Secretary-Treasurer Frank Snyder were there, too. (The AFL-CIO—the American Federation of Labor and Congress of Industrial Organizations—is the largest federation of unions in the U.S.)

"The president decided he was winning in the fifth inning and called it a game—but we know we won yesterday," Bloomingdale told attendees.

Snyder invoked a football analogy, saying that Trump is defeated and that whatever "safety, fumble or interception" that may yet occur—the "game is over."

SEIU Healthcare Pennsylvania President Matthew Yarnell later told DCReport that Trump's efforts to stop the count in his state and the "dangerous rhetoric spewing from the White House podium" is a direct effort to disenfranchise essential workers—many of them people of color.

"These are folks who have been on the frontlines of this pandemic and many of them have voted by mail because they have to," Yarnell said. "They're working 12-hour shifts, they can't get to the polls on election day."

These workers, Yarnell says, have been out there "through thick and thin, day and night supporting our country as we've gone through this pandemic."

"Pre-pandemic and post-pandemic, folks who really make our country work—they deserve to have their voices heard and their ballots counted," he said.

Four years ago, Democrat Hillary Clinton lost Pennsylvania by just over 44,000 votes. This time around, Unite Here—the national hospitality workers' union—believes it has done the "critical work" needed in Black and Brown communities throughout the state to best Donald Trump.

"We knocked on the doors of 575,000 voters across Philadelphia's Black and Brown neighborhoods that had low turnout in 2016," Unite Here Local 274 President Rosslyn Wuchinich told reporters during a Thursday press conference. "In those neighborhoods, we identified 60,000 Philadelphia voters who pledged to us to in person in contactless conversations to vote for Joe Biden and Kamala Harris."

According to Wuchinich, half of those voters had not voted in 2016.

"We know that we made a significant difference in Pennsylvania in this election," she said.

"The members I work with are primarily Black leaders in the Philadelphia school district who need to see a change in this country," Local 634 President Nicole Hunt told reporters. "They've been dealing with racial injustice, joblessness and folks who have just lost hope in this system. In 2016, these people did not vote that we targeted—and we were able to give them their voice back and let them know that they matter."

Unite Here succeeded in knocking on nearly 3 million doors on behalf of the Biden/Harris ticket in the months leading up to the Nov, election.

Unite Here Local 11 represents more than 30,000 hospitality workers in Southern California and Arizona. Union canvassers ranging in age from 15 to 72, started knocking on doors for the Biden/Harris on blistering hot days back in July. When it was over, the union had reportedly put as many as 500 people in the field and interacted with more than 250,000 voters.

"We formed our team from some of the most devastated people, Local 11 Co-President Susan Minato told reporters during the virtual press conference. "These were laid-off hospitality workers who really did not know—and still do not know—if they will go back to a job."

Numerous labor leaders around the country have already stated that Trump would spark a general strike if he tries to subvert the will of the electorate. According to Yarnell "everything is on the table."

"As I watch the results roll in, it's looking more like we're going to have a pretty decisive win for Vice-President Biden," he said. "If Trump continues to try to use tactics to try and intimidate… or use the legal system to try and take away the election from people that were duly won it—we're gonna fight tooth and nail to prevent that."

Unite Here President Donald "D." Taylor calls trade unionists the "difference makers" in the 2020 Presidential Election—and with that much political capital, organized labor should finally have enough political leverage to extract concrete demands from a Democratic Party that has long taken them for granted and failed to deliver for the working people they represent.

"We have to hold [Biden] accountable," Philadelphia's Nicole Hunt told me. "We want to see action taken."

For Unite Here, at least, that kind of immediate action would include relief for hard-pressed working people in crisis; raising the minimum wage, enacting rules that make it easier for working men and women to join a union; comprehensive immigration reform and a green economy.

Taylor expects Joe Biden will be the most "pro-union president" in his lifetime—but still says Labor must still continue to organize and push him to deliver for the workers.

It's unknown, however, how much of the union's agenda can be implemented as Sen. Mitch McConnell and Republicans look likely to retain control of the Senate.

"What we've done is assemble the car," Taylor said. "We're not just going to hand over the keys and say, OK, you drive it."

New York City firebrand Mike Hellstrom, secretary-treasurer of Laborers Local 108, says that the American labor movement knows very well what the integrity of the vote is all about.

"It's how our unions are formed," he told me. "Voting and having your ballot counted is the chief hallmark of our democracy. Organized labor has an obligation in ensuring that this integrity is held up in any election—especially that of the president of our country—including making our voices heard by demanding that all legal votes be counted, and holding those in power accountable to what our democracy stands for."