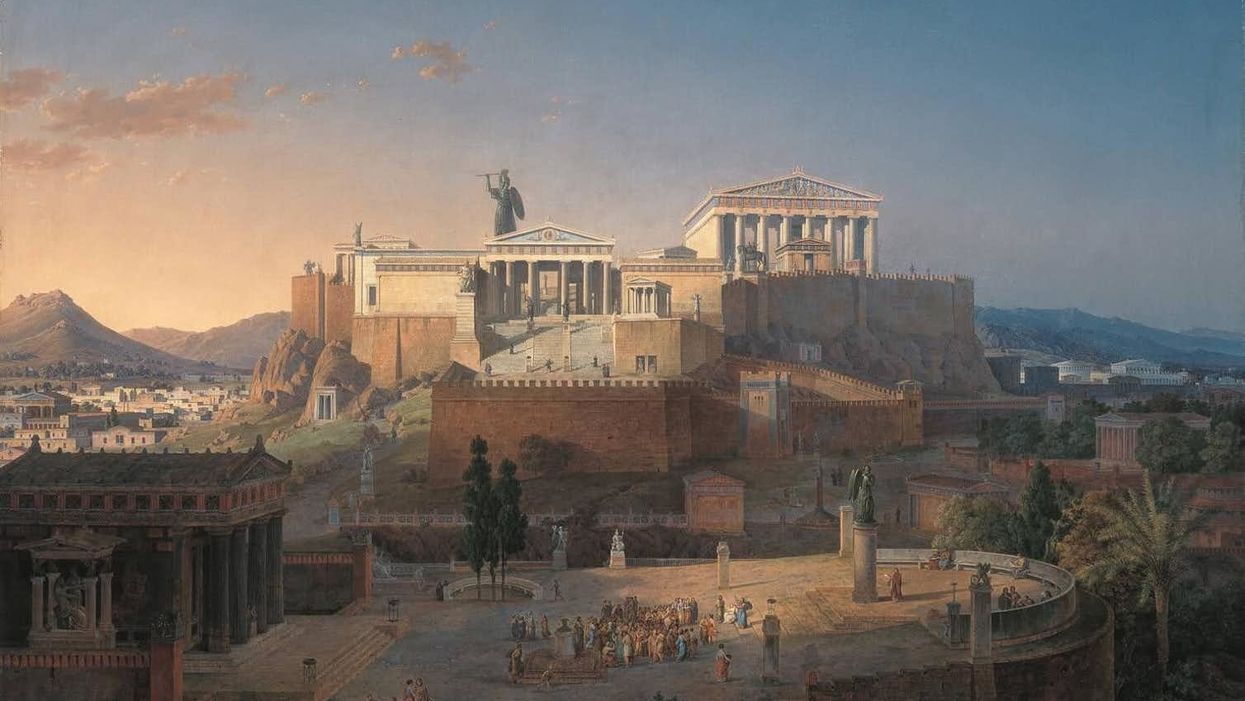 The Conversation
November 07, 2020
In ancient Athens, only the very wealthiest people paid direct taxes, and these went to fund the city-state's most important national expenses – the navy and honors for the gods. While today it might sound astonishing, most of these top taxpayers not only paid happily, but boasted about how much they paid.

Money was just as important to the ancient Athenians as it is to most people today, so what accounts for this enthusiastic reaction to a large tax bill? The Athenian financial elite felt this way because they earned an invaluable payback: public respect from the other citizens of their democracy.

Athens in the fifth and fourth centuries B.C. had a population of free and enslaved people topping 300,000 individuals. The economy mostly focused on international trade, and Athens needed to spend large sums of money to keep things humming – from supporting national defense to the countless public fountains constantly pouring out drinking water all over the city.

Much of this income came from publicly owned farmland and silver mines that were leased to the highest bidders, but Athens also taxed imports and exports and collected fees from immigrants and prostitutes as well as fines imposed on losers in many court cases. In general, there were no direct taxes on income or wealth.

As Athens grew into an international power, it developed a large and expensive navy of several hundred state-of-the-art wooden warships called triremes – literally meaning three-rowers. Triremes cost huge amounts of money to build, equip and crew, and the Athenian financial elites were the ones that paid to make it happen. 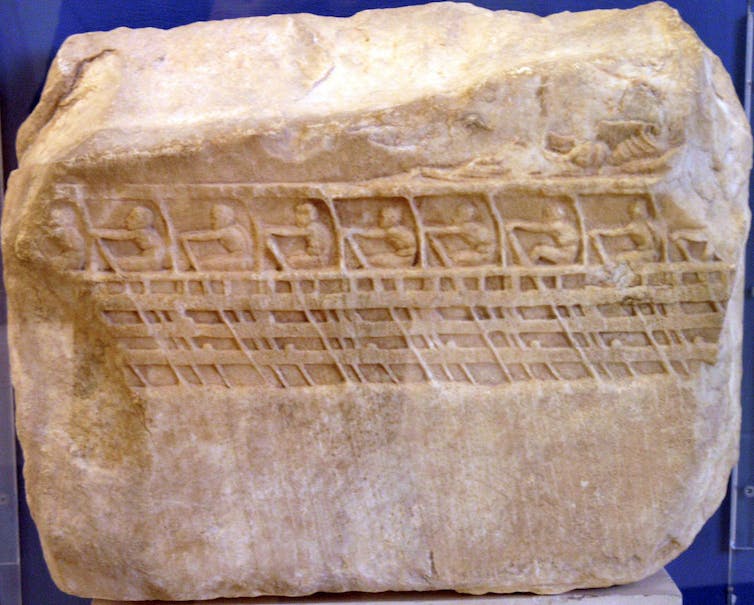 Triremes were the most advanced and expensive military technology of the ancient Mediterranean, and rich Athenians funded them out of their own pockets.

Marsyas via Wikimedia Commons, CC BY

The top 1% of male property owners supported the saving or salvation of Athens –called “soteria" – by performing a special kind of public service called “leitourgia," or liturgy. They served as a trireme commander, or “trierarch," who personally funded the operating costs of a trireme for an entire year and even led the crew on missions. This public service was not cheap. To fund their liturgy as a trierarch, a rich taxpayer spent what a skilled worker earned in 10 to 20 years of steady pay, but instead of dodging this responsibility, most embraced it.

Running warships was not the only responsibility the rich had to national defense. When Athens was at war – which was most of the time – the wealthy had to pay contributions in cash called “eisphorai" to finance the citizen militia. These contributions were based on the value of their property, not their income, which made them in a sense a direct tax on wealth. 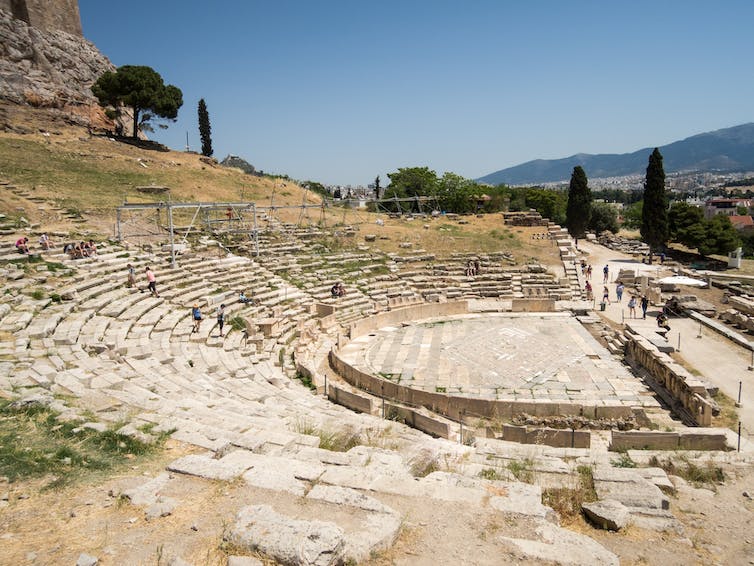 The Theater of Dionysus in Athens could hold thousands of spectators for shows subsidized by liturgists.

dronepicr via Wikimedia Commons, CC BY

To please the gods

To the ancient Athenians, physical military might was only part of the equation. They also believed that the salvation of the state from outside threats depended on a less tangible but equally crucial and costly source of defense: the favor of the gods.

To keep these powerful but fickle divine protectors on their side, the Athenians built elaborate temples, performed large sacrifices and organized lively public religious festivals. These massive spectacles featured musical extravaganzas and theater performances that were attended by tens of thousands of people and were hugely expensive to throw.

Just as with trieremes, the richest Athenians paid for these festivals by fulfilling festival liturgies. Serving as a chorus leader, for example, meant paying for the training, costumes and living expenses for large groups of performers for months at a time.

Proud to be paying

In the U.S. today, an estimated one out of every six tax dollars is unpaid. Large corporations and rich citizens do everything they can to minimize their tax bill. The Athenians would have ridiculed such behavior.

None of the financial elite of ancient Athens prided themselves on scamming the Athenian equivalent of the IRS. Just the opposite was true: They paid, and even boasted in public – truthfully – that they often had paid more than required when serving as a trierarch or chorus leader.

Of course, not every member of the superrich at Athens behaved like a patriotic champion. Some Athenian shirkers tried to escape their liturgies by claiming other people with more property ought to shoulder the cost instead of themselves, but this attempted weaseling out of public service never became the norm.

So what was the reasoning behind this civic, taxpaying pride? Ancient Athenians weren't only opening their wallets to promote the common good. They were counting on earning a high return in public esteem from the investments in their community that their taxes represented.

This social capital was so valuable because Athenian culture held civic duty in high regard. If a rich Athenian hoarded his wealth, he was mocked and labeled a “greedy man" who “borrows from guests staying his house" and “when he sells wine to a friend, he sells it watered!" 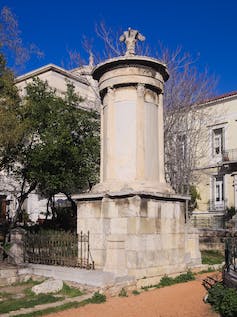 The Choragic Monument of Lysicrates was erected in 335 B.C. by the liturgist Lysicrates after his play won first prize, and it still stands today.

The social rewards that tax payments earned the rich had long lives. A liturgist who financed the chorus of a prize-winning drama could build himself a spectacular monument in a conspicuous downtown location to announce his excellence to all comers for all time.

Above all, the Athenian rich paid their taxes because they craved the social success that came from their compatriots publicly identifying them as citizens who are good because they are useful. Earning the honorable title of a useful citizen might sound tame today – it didn't boost Pete Buttigieg's presidential campaign even though he describes his political role as “trying to make myself useful" – but in a letter to a Hebrew congregation in Rhode Island written in 1790, George Washington proclaimed that being “useful" was an invaluable part of the divine plan for the United States.

So, too, the Athenians infused that designation with immense power. To be a rich taxpayer who was good and useful to his fellow citizens counted even more than money in the bank. And this invaluable public service profited all Athenians by keeping their democracy alive century after century.

Thomas Martin, Professor of Classics, College of the Holy Cross