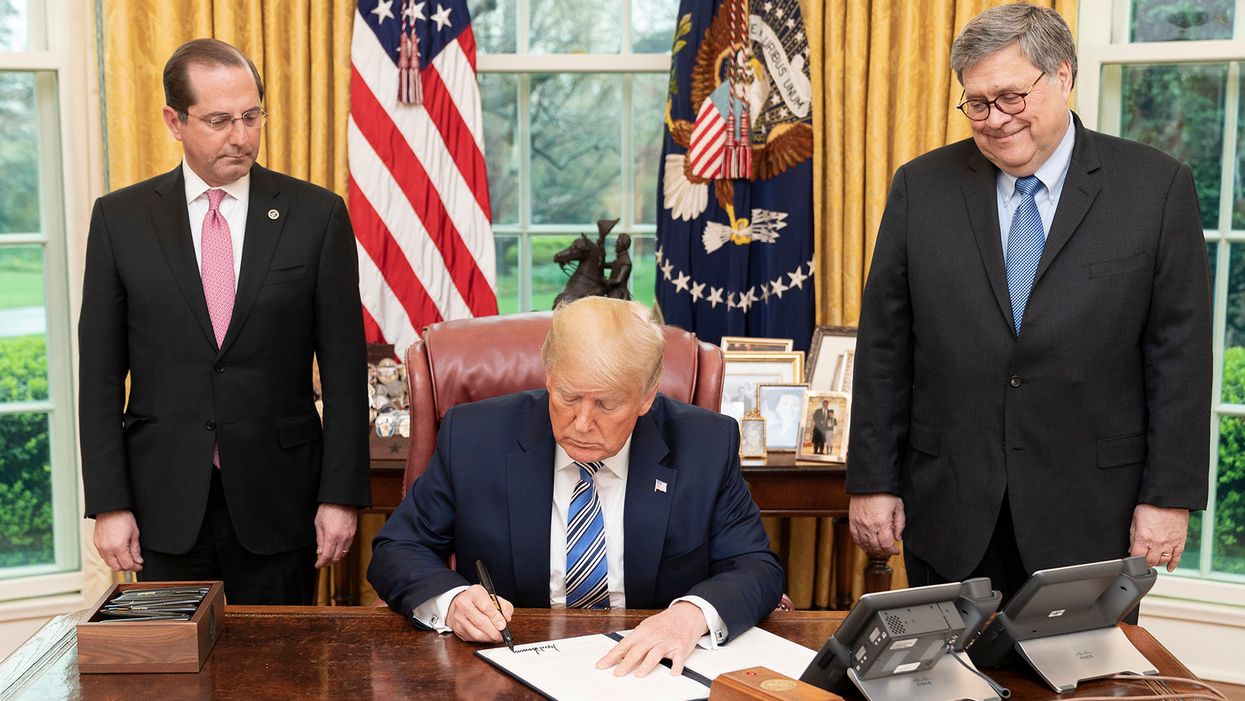 On Saturday, while America slowly came to grips with the joy of breathing again for the first time in years, Donald Trump's Department of Health and Human Services (HHS) released some documents related to its "Operation Warp Speed" COVID-19 vaccination initiative. By "some," I mean a ton of documents. NPR reports this enormous dump, done while the inevitable end of Donald Trump's regime was clear to anyone not named Donald Trump, includes all kinds of wild details about billion-dollar deals with big pharmaceutical companies. One of those details is that "customary protections against potential future price-gouging" aren't in the contracts.

Trump and his team of ne'er-do-wells have been gaslighting the public with confusing and fact-free information about a coronavirus vaccine for months. As with everything else Trump has said in his entire life, he's lied while trying to line his pockets (or the pockets of people he hopes will line his pockets). This has led to a very real and very understandable wariness on the part of most Americans concerning any announcement by the Trump administration about a safe vaccine.

HHS, through a spokesperson, told NPR that "Operation Warp Speed has long publicly stated its commitment to being as transparent as possible." And then that spokesperson went on to lie some more about how these contracts are totally fine. However, once again, the issue here is that the Trump administration has created a program that is not simply the opposite of "transparent," but consistently and deliberately created to circumvent any traditional oversight on the use of taxpayer funds.

Advanced Technology International is the third-party contractor the Trump administration has used throughout this project. News outlets like NPR and Democratic senators like Elizabeth Warren have long warned that the use of this third-party system was a recipe for corruption and mismanagement of resources. Turns out, they have been 100% right at every step. Since the start of the program earlier this year, Operation Warp Speed has been "issuing billions of dollars' worth of coronavirus vaccine contracts to companies through" the unregulated contractor.

While we all agree on the necessity for our country to research and produce a safe and effective vaccine for the COVID-19 pandemic as soon as is possible, it is clear that the Republican pro-market strategy of letting private industry profit from this public health service is just a smokescreen for profiteering off a national emergency. These companies should not need to break the country's bank to make this happen. It is worth their while to create a vaccine as soon as possible because without one, everybody's economy goes down. But that's not how big business—and the politicians in their pockets—see it.

Johnson & Johnson's Aug. 5 contract for the government's purchase of 100 million doses of its coronavirus vaccine doesn't include the march-in rights that are typical planks in contracts for federally funded inventions. Instead, the contract allows a much narrower window for the government to step in, excluding when COVID-19 stops being a public health emergency and becomes endemic, as is expected.

Donald Trump and his cabal of thieves cannot exit the White House and enter the courthouse fast enough.