The United States' election results have been a nail-biter that many polls did not predict. After days of uncertainty, the votes have tipped in favour of Joe Biden, and the U.S. president-elect has since kicked off his transition team to tackle, among other things, climate change.

During campaigning, Pennsylvania received a lot of attention from both presidential candidates. The state sits atop the Marcellus shale, a major source of natural gas; it is the second-largest producer of natural gas in the U.S., after Texas. The industry employs about 32,000 people in Pennsylvania, but clean energy is among the fastest growing sectors in the state.

Some speculated that Biden's stance on fossil fuel divestment, especially his comments during the final presidential debate on moving away from fossil fuels, might have turned away voters worried about their job security in these key states. Yet, the election results have shown the opposite.

Biden's climate platform is not radical

During the final presidential debate, Biden argued that he would “transition [away] from the oil industry … because it has to be replaced by renewable energy over time." The principal policy he proposed was to stop federal subsidies to the oil and gas industry. After the debate, Biden's team clarified that his proposal means a gradual phase-out of fossil fuels and he would not impose bans on the oil and gas industry.

In short, Biden has been strategically ambiguous about the timeline of decarbonizing the U.S. economy. He supports the idea of achieving net-zero emissions in the U.S. by 2050, yet serious questions remain whether his budget-saving and market-oriented approach to fighting climate change would effectively discourage a carbon rebound after the COVID-19 pandemic.

In June, Fatih Birol, executive director of the International Energy Agency, issued a stern warning that “the world only has six months to avert climate crisis" — a post-lockdown rebound in global greenhouse gas emissions would substantially derail the global targets set by the Paris climate agreement signed in 2016. (The U.S. officially left the agreement on Nov. 5, but has Biden promised that it will rejoin.) In light of such policy recommendations, Biden's reliance on market mechanisms to slowly phase-out fossil fuels presents, at best, a moderate approach to decarbonization.

Biden's stance on fracking further reveals his hesitance to take radical measures on the U.S. fossil fuel addiction. During the final presidential debate, Biden repeatedly emphasized that he did not oppose fracking and would prefer to explore technical solutions to cut methane emissions from the oil and gas industry.

There are few readily available solutions for reducing the methane pollution associated with the fracking process. Methane is a potent greenhouse gas — 84 times more powerful than carbon dioxide in the first two decades after its release. Averting a looming climate catastrophe demands an immediate ban on fracking.

Biden is by no means an environmental radical, but the GOP's portrayal of his support for fossil fuel divestment had the potential to damage his election performance in Texas and Pennsylvania.

Previous research has addressed the pros and cons of fossil fuel divestment as a climate action tactic, the strong support it receives within higher education and its implications for climate justice. But there is no in-depth information available on undecided and conservative voters' perceptions on fossil fuel divestment.

Prior to this election, climate change was a peripheral concern during presidential campaigns and debates. Scientific American highlighted that climate change received more attention during the first Trump versus Biden debate than in any other presidential debate in history. 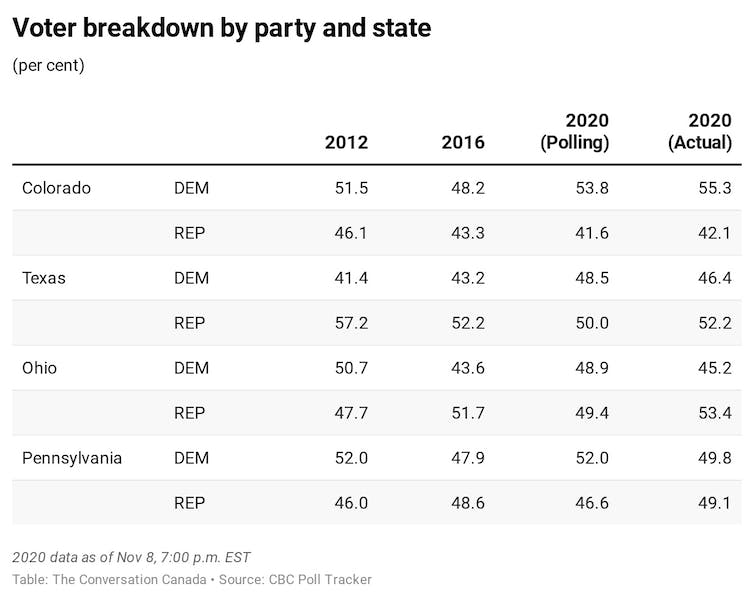 Comparing this year's election results with the final polling average and previous election results, two divergent trends emerge. In Colorado, which produces the most shale oil and gas in the U.S., voters remain supportive of Biden. Despite being defeated in Texas, the Democratic share of popular votes there increased to 46.4 per cent this year from 43.2 per cent in 2016. The results suggest one of two things: Either Biden's talk of fossil fuel divestment did not substantially change voters' minds, or it led to larger voter turnouts of progressive young voters.

The results in Ohio and Pennsylvania followed the same trend. Although Biden's performance in both states has been worse than the national polling average numbers, he gained a larger share of votes than Hillary Clinton in 2016.

In Pennsylvania, Biden has managed to win 49.8 per cent of the votes, which is a solid performance considering Trump's strong pro-fracking push in Pennsylvania days before the election.

At the county level, the dynamics become more complicated. In the southwest and northeast corners of the state where fracking activities concentrate, Trump held a decisive lead. In Bradford County, one of the most fracked places on the planet, Trump received over 70 per cent of the votes.

Although election results suggest that fossil fuel divestment did not negatively impact Biden's overall election performance, it remains a pivotal and polarizing topic for many states, and could be a challenge for future progressive contenders.

Does such a political dilemma mean little political actions against the fracking industry and its lobbyists in the near future? We have to patiently wait for the next administration's climate policies.