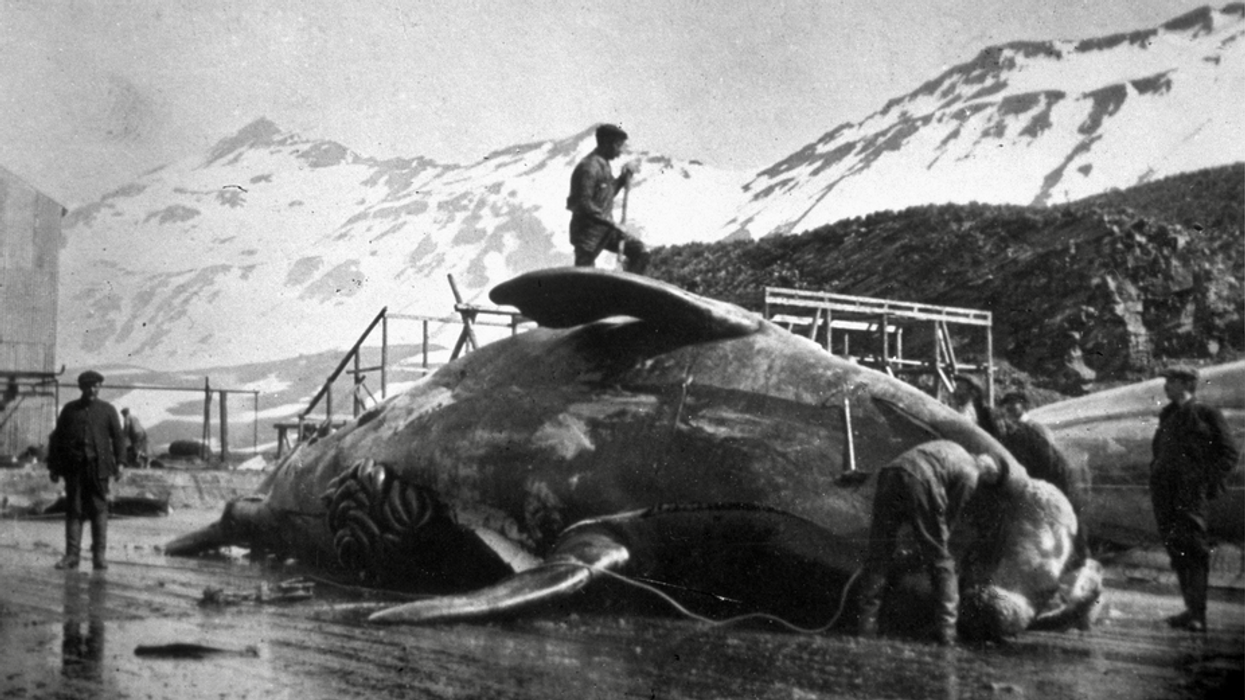 Workmen dissecting a whale carcass in Antarctica, circa 1935. Hulton Archive via Getty Images

200 years ago, people discovered Antarctica – and promptly began profiting by slaughtering some of its animals to near extinction

Two hundred years ago, on Nov. 17, Connecticut ship captain Nathaniel Palmer spotted the Antarctic continent, one of three parties to do so in 1820. Unlike explorers Edward Bransfield and Fabian von Bellingshausen, Palmer was a sealer who quickly saw economic opportunity in the rich sealing grounds on the Antarctic Peninsula.

In the two centuries since, Antarctica has seen a range of commercial, scientific and diplomatic developments. While some countries attempted to claim territory on the continent in the first half of the 20th century, today the region is governed through the international Antarctic Treaty System.

Although the treaty claims to govern Antarctica in the interests of all “mankind,” some countries have gained greater benefits from the region than others. While mining is currently banned under the Antarctic Treaty and the days of sealing and whaling are over, Antarctica’s marine living resources are still being exploited to this day.

Palmer was followed by a rush of other sealing ships, mostly from the United States and Britain, that methodically killed fur seals along Antarctic beaches, swiftly taking populations to the brink of extinction. Seal fur was used for clothing in the 18th and 19th centuries in many parts of the world and was an important part of U.S. and European trade with China in the 19th century.

Fur sealing had a real boom-and-bust quality. Once a region was picked over, the sealers would move to more fruitful grounds. Before 1833, at least 7 million fur seals were killed in the Antarctic and sub-Antarctic. As early as 1829, British naturalist James Eights lamented the loss of the fur seal on the Antarctic peninsula: “This beautiful little animal was once most numerous here.”

Elephant seals were also hunted, but for their blubber, which could be converted into oil. It was not difficult for hunters to drive them to the beaches, lance them through the heart (or, later, shoot them in the skull), drain their blood and remove their blubber. “We left the dead things, raw and meaty, lying on the beach,” according to one sealer. The birds would pick the skeletons clean within days.

Sealing rapidly declined in the 1960s, owing to a mix of evolving cultural sentiments and changing availability of other materials, such as plastics, that could be made into warm synthetic clothing and petroleum-based lubricants.

The broadcast of footage showing Canadian sealing in the early 1960s scandalized North American and European citizens and prompted a quick shift in attitudes toward sealing. The Convention for the Conservation of Antarctic Seals was signed in 1972, regulating the large-scale slaughter of seals for all nations in the region. Today, the population of fur seals has rebounded, with a colony of over 5 million on South Georgia alone, though numbers have declined since 2000. Elephant seals, too, have largely rebounded, with an estimated stable population of 650,000 since the mid-1990s.

The whaling grounds off Antarctica were so rich they drew fleets from many nations. First came Norwegian and British companies, later to be joined by others from Germany, Russia, the Netherlands and Japan. Whaling had occurred in the Southern Ocean in the 19th century, but it wasn’t until the first half of the 20th century that whales were hunted to near extinction there.

In the 19th century, whale oil was used primarily for lamp fuel. But after 1910, new uses were found for the oil, including as industrial lubricants and edible fats.

Whaling became extremely lucrative for a small group of companies, including Unilever, whose early fortunes were built from margarine made with whale oil.

At first, whales killed at sea had to be brought to a shore station to be processed. In 1925, an observer wrote, “What an appalling stench it is…The water in which the whales float, and on which we too are riding, is blood red.” From the late 1920s on, these shore stations were replaced by pelagic whaling stations, where whales were processed more efficiently on factory ships at sea.

In 1946, some international efforts were made to protect whales. The goal of the International Whaling Commission created that year was “to provide for the proper conservation of whale stocks and thus make possible the orderly development of the whaling industry.”

But, again in the 1960s, public attitudes toward whales, like seals, began to change when environmentalists revealed they were highly intelligent, sociable creatures that sang in the ocean depths. Most nations ceased whale hunting in the Antarctic by the end of the 1960s – because of this consciousness and also because there were inexpensive alternatives to whale products.

Antarctica’s rich marine life continues to be exploited today. Krill and toothfish began to be fished in the 1970s.

Krill, a small shrimp-like crustacean, is used in nutritional supplements and pet foods. Norway, China, South Korea and Chile are its biggest harvesters. Toothfish, which has been marketed as Chilean sea bass, is on menus worldwide.

Since 1982, the Commission for the Conservation of Antarctic Marine Living Resources has managed these fisheries with the overriding goal of maintaining the whole ecosystem. Whales, seals, birds and other fish rely on krill, making them essential to the Antarctic marine ecosystem.

While krill and toothfish are currently both plentiful in the Antarctic, it is unclear how much the reduction of sea ice and the changing migration patterns of predators who feed on these species are affecting their populations.

Historically and currently, only a small number of people have profited from Antarctica’s living resources, at the great expense of animal populations. Even if sustainable harvesting is possible now, climate change is rapidly undermining Antarctic’s ecological stability.

While major environmental campaigns try to raise awareness of Antarctica’s fragility, most consumers of its products likely do not even know their provenance. Whale and seal populations continue to recover from past overexploitation, but the future impacts of current fishing practices and climate change are uncertain.