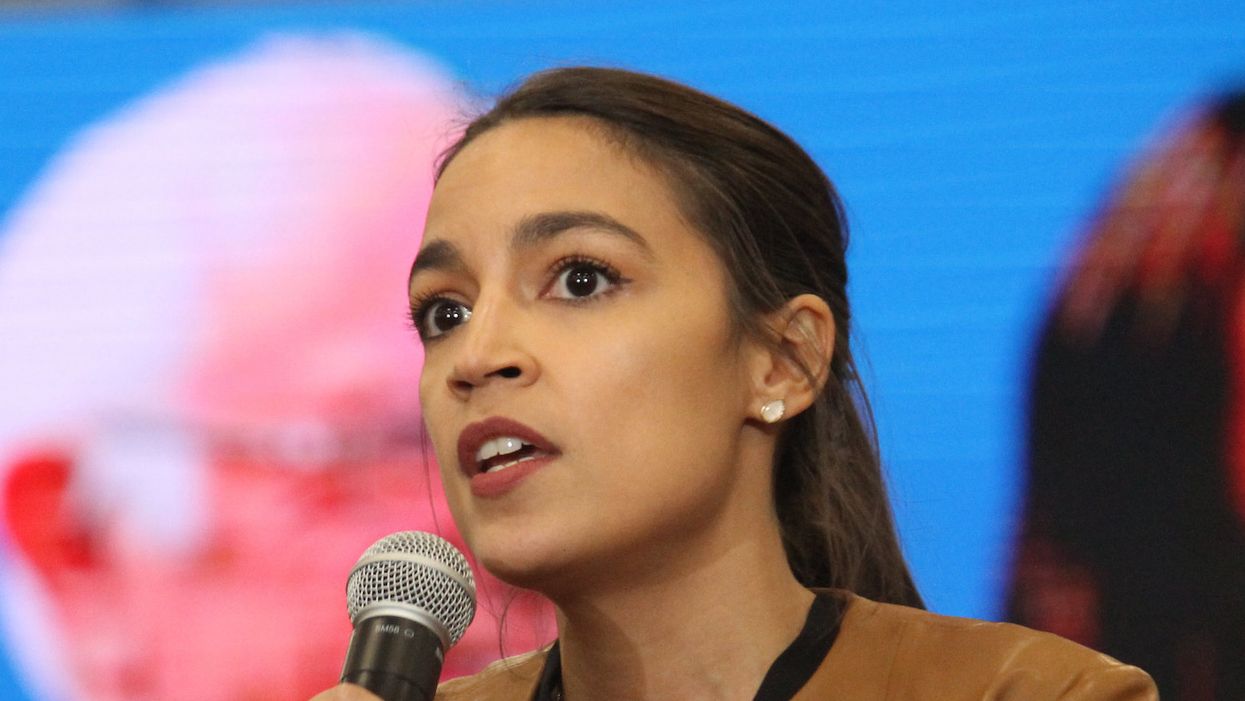 Rep. Alexandria Ocasio-Cortez was on CNN Sunday morning with Jake Tapper on his State of the Union show. In part because Democratic reps going on Sunday shows, like Republican reps going on Sunday shows, is about this coming election, and in part because newscasters are not particularly deep or creative when it comes to talking about politics, Tapper decided to spend a lot of time trying to get Rep. Alexandria Ocasio-Cortez to attack Joe Biden for their differences of political opinions. Newsflash: Rep. Alexandria Ocasio-Cortez, progressive hero, co-author of the ambitious Green New Deal environmental package, and Vice President Joe Biden aren't exactly on the same page as to how to handle climate change.

More to the point, Tapper asked Ocasio-Cortez whether or not she was bothered by the fact that Joe Biden has not said he would outright ban fracking. The move to ban fracking in states across the country has been a seesaw battle of fossil fuel interests fighting against progressive environmentalism and science. Biden's refusal to provide whole-throated support for a ban on fracking is disappointing to many of us on the left, but it isn't surprising. Even more importantly, it is below the most essential first step the progressive movement—and the country for that matter—needs to take: getting rid of Donald Trump from the White House, and getting rid of the Republican majority in the Senate.

Let's send the corporate welfare class of elected officials packing. Donate what you can to help take back the Senate.

Rep. Ocasio-Cortez isn't going to be pulled into a pointless argument about fracking with Jake Tapper. Her position is well-reported. So is Joe Biden's. AOC explains very clearly that this is how politics work in a representative democracy.

REP. ALEXANDRIA OCASIO-CORTEZ: It does not bother me. I believe, and I have a very strong position on fracking. You know, the science is very clear, the methane emissions from fracking are up to 64 times more powerful than CO2 emissions and trapping heat in the air, and from a perspective of stopping climate change there is a scientific consensus. However, that is my view. Vice President Biden has made very clear that he does not agree with the fracking ban and I consider that, you know—it will be a privilege to lobby him should we win the White House but we need to focus on winning the White House first. I am happy to make my case but I understand he is in disagreement with that issue.

Tapper now wonders whether this will depress the youth vote, a vote that AOC represents more closely than Joe Biden. This, of course, is literally the only reason Trump and his surrogates have been bringing up this difference of positions the last couple of weeks. The hope is that it will depress the more progressive vote, while spooking some more conservative-leaning folks in fossil-fuel heavy states like Pennsylvania and Texas. Ocasio-Cortez points out that the youth vote over the past couple of years has not simply become more sophisticated since 2016, it has brought in more progressive candidates and officials into local elections. The turn out in 2018 showed that, and Ocasio-Cortez believes that this election is very clearly a choice between Donald Trump, someone who is a non-starter of a human being, and Joe Biden.

Tapper then plays a clip of Biden telling reporters that he isn't "getting rid of fossil fuels for a long time," but that he's talking about getting rid of the subsidies the fake free-marketeers enjoy in the fossil fuel industry. While Tapper is hoping that this will illustrate how Biden isn't AOC and the youth vote may be turned off by this statement, Ocasio-Cortez sees it as an important step in the right direction.

REP. OCASIO-CORTEZ: When he says we are eliminating subsidies, I think that is, frankly, an important first step. A lot of folks who like to tout themselves as free market capitalists, while still trying to make sure they get as much government subsidy, and propping up of the fossil fuel industry as possible. If you do believe in markets, solar and renewable energies are growing less and less expensive by the day in many areas. They are starting to become less expensive than fossil fuels. When you eliminate government subsidies, it becomes more difficult for fossil fuels to compete in the market. I think while the Vice President wants to make sure that he is not doing it by government mandate or regulation. I do believe we are moving towards that future. I believe that there's a way and that we should push that process along but the vice president and my disagreements are, I believe, recorded and that is quite all right.

Get out and vote.