The Arctic Circle became unbelievably hot on June 20. In the Russian community of Verkhoyansk, temperatures topped 38C, marking what may be the highest air temperature ever recorded within the Arctic.

The temperatures at Verkhoyansk are part of a larger trend across western Russia this summer, with small communities throughout the region reporting temperatures that are smashing local records that have stood for decades. During the latter half of June, surface temperatures throughout western Siberia were as much as 10C above historical norms, marking one of the hottest Junes on record despite relatively cool temperatures at the start of the month.

For scientists the world-over these record-breaking temperatures are alarm bells, demonstrating the kind of extreme weather events we can expect to see more often if climate change continues unchecked. However, it is the long-term fallout from modern heat waves that has many northern scientists deeply concerned, as they will affect our planet for decades to come.

During heat waves surface temperatures soar, often triggering a chain of fire-promoting weather conditions including extreme thunderstorms. These thunderstorms have hundreds of lightning strikes that can ignite the dry soils and vegetation that serve as fuel for fire.

In northern regions like the boreal biome, these fire-promoting conditions can cause large-scale wildfires that burn millions of hectares of forest in a single summer.

Historically, humanity has considered wildfire a true disaster and spent considerable resources to suppress them. We now understand that despite the initial loss of established trees and soils, wildfires are a natural and integral part of the boreal biome.

Modern wildfires, however, are occurring with increasing frequency and intensity, covering a larger area due weather events like severe heat waves. In extreme fire years, these modern wildfires can burn deep into the organic soils that characterize boreal forests. These carbon-rich soils have been built up over thousands of years and hold approximately 30 per cent of the world's terrestrial carbon stocks.

When fires burn deep into soils or return too quickly to a forest, they lose their “ancient carbon" stocks. Instead of being held in the ground these ancient carbon reserves are combusted and released back into the atmosphere, increasing the carbon levels. The higher carbon dioxide levels generated by wildfires intensify climate change impacts like heat waves, which can lead to further wildfires, forming a powerful “positive feedback" loop with climate change.

While these trends alone are alarming, northern researchers warn that the fallout from heat waves won't stop when the fires burn out. In northern regions where the soils historically stay frozen year-round, a whole new set of changes are beginning to take form.

Permafrost forms on the landscape when soil materials remain below freezing for two or more consecutive years. In some areas permafrost forms in direct response to a cold climate.

As one moves further south, however, permafrost becomes increasingly dependent on the presence of thick organic soils, surface vegetation and a shady overstorey to survive the warm summer months. In those cases, the ecosystem acts like a giant protective blanket, limiting the sun's heat that is able to reach the frozen permafrost materials below. 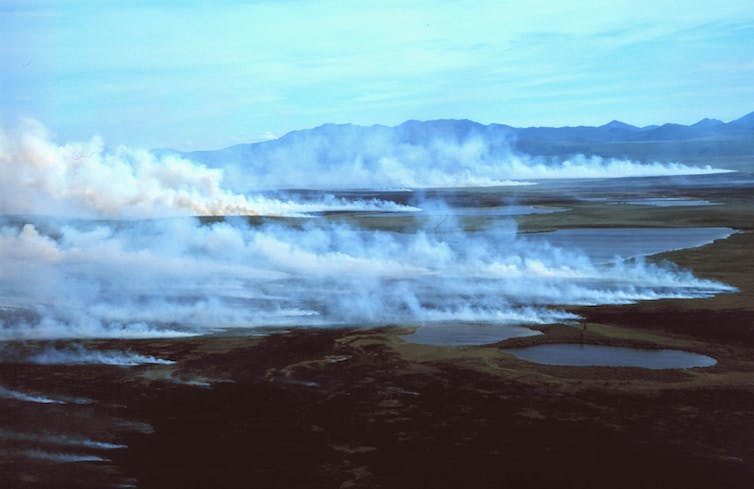 When permafrost ecosystems burn, the wildfire consumes these protective layers, often triggering permafrost thaw. This can occur gradually, with the thawed layer expanding slowly over decades, or abruptly, with the thawed layer expanding dramatically over years. The land may cave in or sink, plant communities may change completely and local water flows may be rerouted.

In both cases, the loss of permafrost makes the massive Arctic carbon reserves more vulnerable to loss. With gradual thaw microbes are able to break down and release the previously frozen carbon back to the atmosphere as carbon dioxide. In contrast, abrupt thaw commonly occurs in ice-rich permafrost resulting in warmer but also wetter soils. Under these conditions decomposition still occurs but carbon is commonly returned to the atmosphere as methane, a greenhouse gas approximately 30 times more powerful at trapping heat than carbon dioxide.

All this lost carbon may make the positive feedback with climate change even stronger. While scientists are working to understand if the vegetation that grows after permafrost thaw is able to offset all the carbon released during decomposition, most current models indicate that permafrost thaw will ultimately be a source of atmospheric carbon.

Researchers are coming to understand just how tightly linked these disturbances caused by climate change really are. What appears as an individual event — heat wave, forest fire or permafrost thaw — has cascading ramifications through time and space in the Arctic, potentially serving as the seed crystal for the next disturbance in the coming months, years or even decades that follow.

Heat waves, wildfires and permafrost thaw represent an environmental trifecta that are inherently linked and drive change in the occurrence and intensity of one another.