Here's the truth behind the Republicans' big lie about 'court-packing' 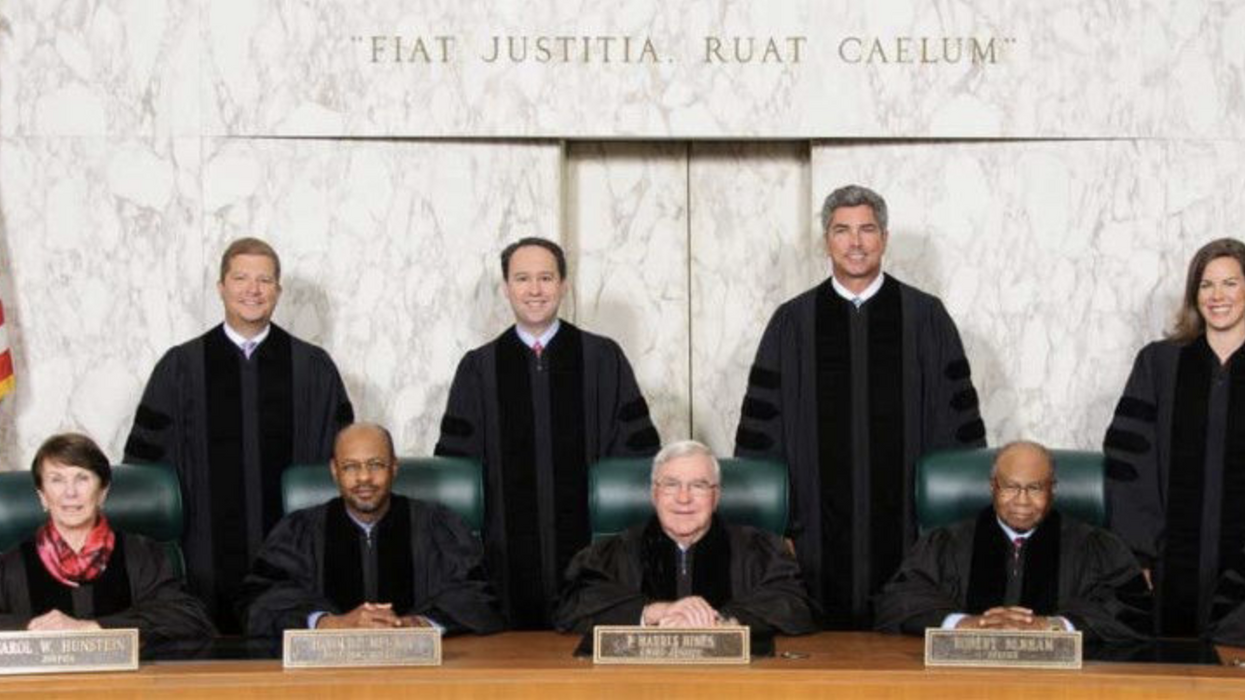 Since shortly after the death of Ruth Bader Ginsburg, Republicans have said that they will confirm her replacement just days before or after the election, after blocking Merrick Garland for 8 months in 2016, because they have the power to do so. Senate Majority Leader Mitch McConnell told Fox News, "this Republican Senate was elected for a term that ends in January of next year. The president was elected for a four year term that ends January 20th of next year. There are no reduced constitutional prerogatives during either of our tenures." The Constitution allows it, so for them it is self-evident that they will do it. Norms, public opinion and the justifications they offered for not even giving Garland a hearing four years ago don't enter into the picture.

But as soon as reporters started asking Joe Biden and Kamala Harris about whether they planned to expand the Supreme Court in response--which has become 2020's version of "but her emails"--they immediately changed their tune, decrying the horrors of violating the unwritten norms of democratic governance. When Biden parried a question about court-packing (poorly, as I wrote last week), Commentary's Noah Rothman complained that not responding to the hypothetical was "contemptuous and unacceptable," because adding justices would "fundamentally alter[] the civic compact."

In response to the question, Biden offered a common refrain among Democrats. "Look, the only court packing is going on right now," he told reporters. "It's going on with the Republicans packing the court now." And this is true in a broad sense. Republicans mounted an unprecedented blockade of Barack Obama's nominees to the federal appellate courts, and then in 2016, they kept an eight-seat Supreme Court until Donald Trump managed to win the Electoral College. Before the election, some of them vowed to keep it that way throughout a Clinton presidency if she had won. They then packed the lower court vacancies they'd created with young judicial activists and installed Neil Gorsuch on the highest court. It's court-packing by another name.

But the hypocrisy runs even deeper. Because while Senate Republicans haven't actually expanded the number of seats on the Courts, their co-partisans in state governments have done so repeatedly in recent years.

In 2016, Georgia Governor Nathan Deal signed a bill expanding his state's supreme court by two members, shifting the balance of power from a 4-3 majority of Democratic appointees. It was Republicans' third attempt to do so over the previous ten years. That same year, Arizona Governor Doug Ducey followed suit, even though he was elected with a conservative majority on the court. He also gamed a state commission that recommend judicial candidates for the Governor to choose from. As in Georgia, Ducey's expansion was the culmination of five years of efforts by Republicans in the state legislature.

According to Duke University legal scholar Marin Levy, three other states have moved to expand their highest courts without success over the past 13 years. In two of the three, Republicans drove those efforts in response to specific rulings they didn't approve of--the Florida GOP was incensed when their Supreme Court ruled 5-2 that their school voucher program was unconstitutional, and Iowa Republicans were outraged by a decision in favor of marriage equality.

Levy also noted that there have been five efforts to reduce the number of justices on state supreme courts over the past decade. Four of them--in Oklahoma, Montana, Washington and Pennsylvania--were undertaken by Republicans, either as acts of retribution for rulings they disagreed with or to shift the balance of power on the bench, and one, which would not have tipped the ideological balance if it had been successful, was driven by a Democrat in the Alabama legislature.

In the two states where Republicans did in fact expand their highest courts, they argued that they were merely doing so to deal with rising caseloads as their populations grew. It's worth noting, then, that when the number of justices on the United States Supreme Court was set at nine in 1869, the country's population was around one-tenth of what it is today. There were nine lower court circuits at the time, with one Supreme Court justice overseeing each; today there are 13 circuits. An expansion is long past due.

So keep in mind that while Republicans are now preemptively warning that Democrats would "destroy the Supreme Court" by changing its number of seats, they have attempted to do the same thing eight times at the state level in the past 13 years--and succeeded twice.

There are a number of good arguments for expanding the Court. A critical one is that it might serve as a deterrent to a Republican Party that has adopted the view that it can do anything within its constitutional powers without regard to longstanding norms and assume that Democrats can be cowed into not following suit.