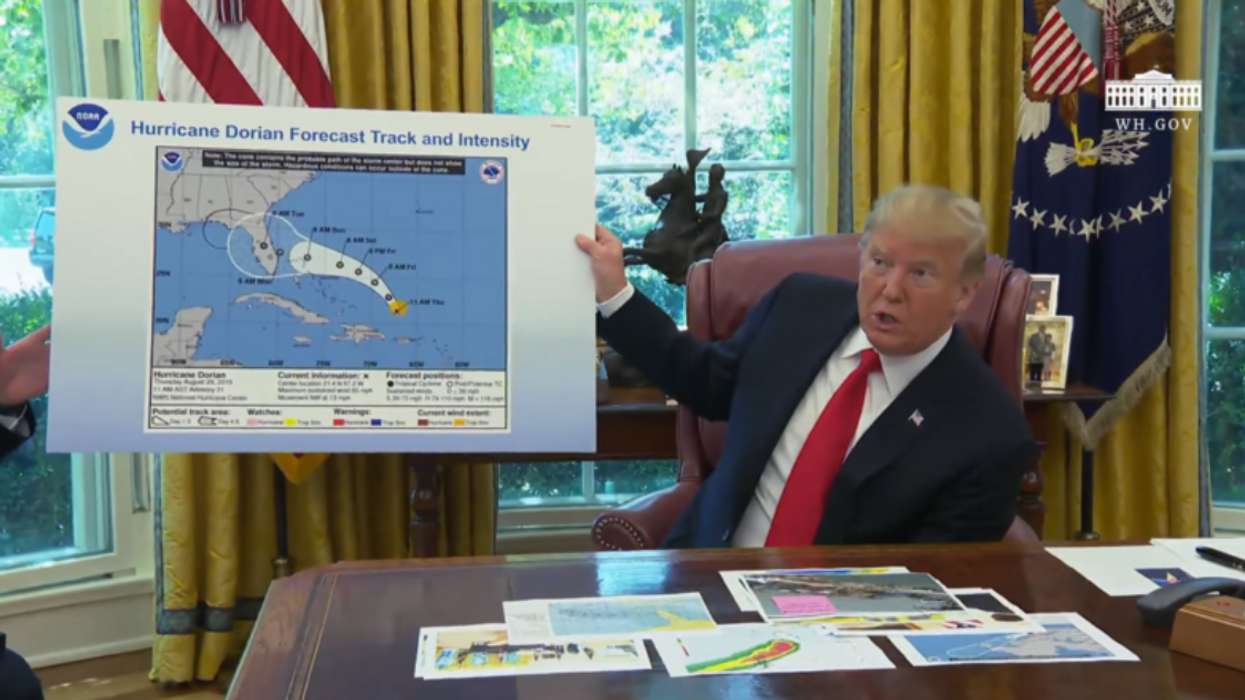 President Donald Trump has a long history of undermining the work of scientists and the variance surrounding Hurricane Dorian is reportedly still a point of conflict within the National Oceanic and Atmospheric Administration (NOAA).

Like Trump's stance on the coronavirus outbreak, he refused to admit that he was completely wrong about the catastrophic Category 5's path and according to The New York Times, the ordeal spiraled into a full scandal behind closed doors. In fact, the "Sharpiegate" ordeal reared its ugly head yet again this week when NOAA's acting chief scientist, Craig McLean, lost his job.

The publication reports that McLean was removed from his position earlier this month when he raised questions about whether or not a new political appointee was aware of the agency's guidelines scientific integrity. The guidelines strictly prohibit manipulating scientific research for the purpose of political gain. In a nutshell, politicization of any kind is not allowed.

Apparently, the new appointee, identified as Erik Noble, also a former White House adviser, was not pleased with McLean's request. Here is an excerpt from the NY Times report:

The request prompted a sharp response from Dr. Noble. "Respectfully, by what authority are you sending this to me?" he wrote, according to a person who received a copy of the exchange after it was circulated within NOAA.

Mr. McLean answered that his role as acting chief scientist made him responsible for ensuring that the agency's rules on scientific integrity were followed.

The following morning, Dr. Noble responded. "You no longer serve as the acting chief scientist for NOAA," he informed Mr. McLean, adding that a new chief scientist had already been appointed. "Thank you for your service."

While McLean is still employed with the agency, he appears to have been demoted. Now, Ryan Maue, a former research meteorologist at the Cato Institute, has taken over the chief scientist position. The latest NOAA debacle follows Trump's "Sharpiegate" scandal when he attempted to undermine NOAA scientists as he claimed Alabama was within the cone for the hurricane's projected path. The president had also been photographed with an NOAA image that included an altered look at the hurricane's projected path. The altered image actually included Alabama.

This was completely untrue. At the time, the NOAA quickly responded to make it clear that Alabama was not in the storm's path. The agency tweeted, "Alabama will NOT see any impacts from #Dorian. We repeat, no impacts from Hurricane #Dorian will be felt across Alabama. The system will remain too far east."

Days later, McLean pushed back against the White House in a statement as he openly denounced the Trump administration's interference. Over the last year, Trump's blatant disregard for science has weakened the American public's trust in the integrity of science. Many of his supporters now diminish the importance of science often dismissing the severity of reports due to the president's stance.