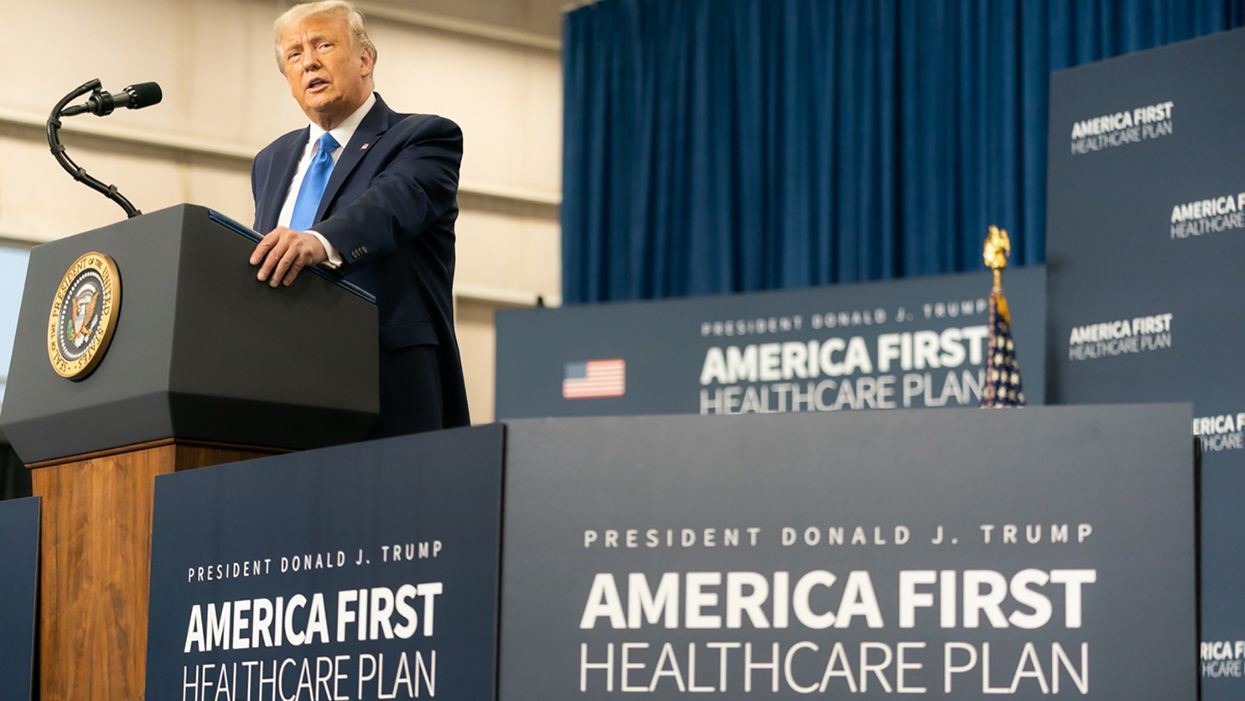 On Friday, Donald Trump brought his Superspreader Tour to The Villages in Florida. While sojourning at the nation's largest retirement community—where a dozen people died of COVID-19 on the day of Trump's arrival—Trump greeted the mostly maskless crowd with reminders that he's all about letting them die. While a maskless Trump fan constantly tossed off white power signs in the background, Trump did his cover version of "Don't Fear the Reaper" for the gathered seniors.

"All they talk about is COVID, COVID, COVID,'' said Trump, "because they want to scare people." Trump them went on to explain how he would always "love and protect" the elderly … skipping over the part of his COVID-19 response that is basically calls on them to lay down their lives to protect Wall Street … so long as they make it to Nov. 3.

It was a wonderful message for the day in which the United States hit its highest number of new cases since the beginning of the pandemic. To reinforce that message, Ron DeSantis (yes, maskless) warmed up the crowd with warnings that if Joe Biden won, the nation would not follow the wonderful model he had established in Florida, where the high number of cases is being reduced through the most effective means available: Stop reporting new cases.

But there was one topic that didn't get a lot of attention. Trump did not tell the gathered retirees that the $200 bribe he promised them in September—a card offering refunds on prescription drugs—isn't going to arrive before Election Day. If it arrives at all.

In September, Trump made roughly his ten-zillionth claim that he had a "much better" health care plan than Biden, despite having no health care plan. Of course, since Trump's campaign has published no plans for anything in his second term, and the Republican Party didn't even bother to write a platform for 2020, the fact that this particular policy is missing could be overlooked. It's like a white cow hiding in a snowstorm … a white cow that promises to keep any black cows from moving into the field.

During the debate Thursday night, Trump said that once Obamacare was out of the way, and somewhere between 20 million and 130 million Americans were left without health insurance, Republicans would "come up with" that great health insurance plan. That being the plan they've failed to produce in the greater than ten years since the Affordable Care Act was passed.

But in September, Trump announced that he was going to announce his health care plan. Then he announced "another historic provision to benefit our great seniors" also known as ... a card. A $200 cash card for seniors that could be used to pay for prescription drugs. To do this, Trump would simply do what he's done in his "bribe farmers" plan: grab billions in taxpayer funds and hand out money to a critical voting group. The legal authority to do this is at best, dubious.

Why did Trump offer up this cards? That's because his vaunted skills in making the deal absolutely failed to budge the prices from pharmaceutical companies and a deal that had been in the works for months absolutely collapsed. And why did it collapse? Because Trump insisted that drug companies pay for a cash discount card that he could use to bribe seniors. That single factor, an absolute insistence to get the companies to pay for the card, caused the complete failure of a deal that might genuinely have saved Americans billions and set a precedent for dealing with big pharma.

So, having failed to get Mexico drug companies to pay for the wall card, Trump simply dipped into the pocket of taxpayers and took the money, so he could hand it back to a select demographic he needs to win Florida and Arizona. Easy peasy.

However, it was almost immediately clear that it was going to be difficult to print and deliver all the Vote For Me Cards before the election. That's because not only had Trump not bothered to figure out where to find the $8 billion he needed, he had left a few steps out of his plan. Like the plan part. Blindsided officials didn't know who was to get the card, how the spending of funds was to be regulated, or who was overseeing the program. The whole thing seemed to boil down to Trump wanting to give seniors a card with his signature, if not his face, and that was it. Still, there was a lot of last minute scrambling from officials in an effort to make sure that at least some portion of seniors received their bribes on time.

Then they ran into a few other problems. As The New York Times reported on Thursday, the cards may be flat out illegal. Just Trump's announcement may be yet another violation of the poor old Hatch Act, through it's hard to tell, since that Act is now covered in so many of Trump's footprints.

As might be expected, the attitude at the Trump White House is damn the law, full speed ahead. On Wednesday, Mark Meadows told reporters that the program for sending out the cards "is being finalized in the next 48 hours." But under questioning, Meadows also admitted that the cards are not arriving any earlier than sometime in November. Or maybe December.

That's still not quite correct. Since the cards aren't going to make it in time for Election Day, when they could fulfill their planned purpose, the most likely date is "never."