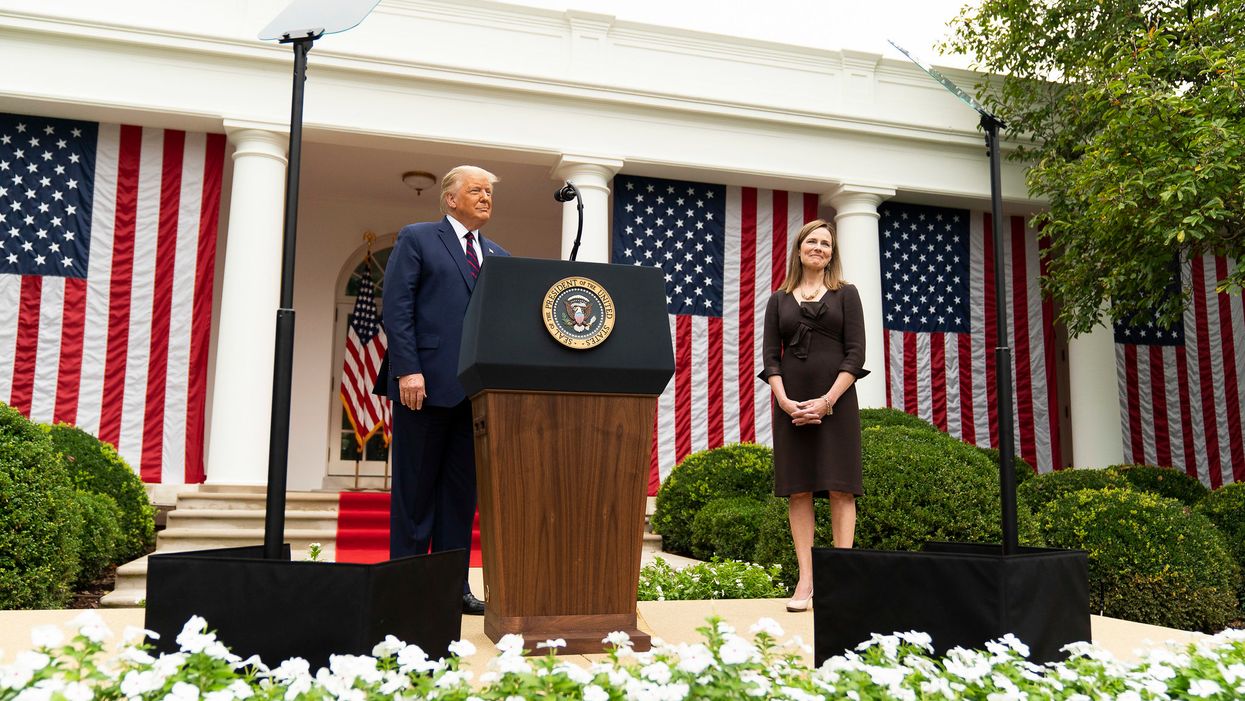 President Donald J. Trump announces Judge Amy Coney Barrett as his nominee for Associate Justice of the Supreme Court of the United States in the Rose Garden of the White House on Saturday, September 26, 2020, who was joined by her husband Jesse Barrett and their children. (Official White House Photo by Shealah Craighead)
Jake Johnson
and
Common Dreams
October 25, 2020

More than 70 science journalists have signed an open letter warning that Supreme Court nominee Amy Coney Barrett's close ties to the fossil fuel industry and refusal to publicly acknowledge the established science behind human-caused climate change make her an enabler of "the ecological crisis of our times."

First published in Rolling Stone on Sunday, the letter slams Barrett's responses to basic climate questions during her confirmation hearings as "factually inaccurate, scientifically unsound, and dangerous." As Common Dreams reported, the right-wing judge insisted she has "no firm views" on the climate crisis and, in later written responses, called the science of climate change "controversial."

"It is frightening that a Supreme Court nominee—a position that is in essence one of the highest fact-checkers in the land—has bought into the same propaganda we have worked so hard to dispel," reads the letter, which was signed by author and environmentalist Naomi Klein, 350.org co-founder Bill McKibben, and other prominent climate writers.

"How can Judge Coney Barrett rule on pending issues of climate change liability, regulation, finance, mitigation, equity, justice, and accountability if she fails to accept even the underlying premise of global warming? The answer is that she cannot," continues the letter, which comes hours before the Republican-controlled Senate is set to clear a procedural hurdle and pave the way for a final vote on Barrett's confirmation Monday.

Having a justice who is hostile to science on the Supreme Court for decades to come is a supreme threat to the plan… https://t.co/gnCTPLOeq8
— Eric Holthaus (@Eric Holthaus)1603636689.0

Below is the full letter and list of signatories:

We are science and climate journalists. We are researchers and weavers of information, creating a fabric that explains the work of scientists who themselves are working to describe our natural world and universe. We are published in the nation's leading outlets, both large and small, including Scientific American, Nature, National Geographic, MIT Technology Review, The New York Times, The Wall Street Journal, The Guardian, The Washington Post, The New Yorker and many more. Over decades of reporting on the threats and now deadly and devastating harms of worsening climate change, we have succeeded in at least one respect. The vast majority of the world's people, including those in the United States, not only acknowledge the scientific certainty of climate change, but also want action taken to address it.

We have succeeded because the science is clear, despite there being a massive well-orchestrated effort of propaganda, lies, and denial by the world's largest fossil fuel corporations, including ExxonMobil and Koch Industries and fossil-fuel-backed institutes and think tanks. It is frightening that a Supreme Court nominee—a position that is in essence one of the highest fact-checkers in the land—has bought into the same propaganda we have worked so hard to dispel.

And it is facts—a word under repeated assault by the Trump administration, which nominated Judge Amy Coney Barrett—that are at issue here. "I'm certainly not a scientist…I've read things about climate change. I would not say I have firm views on it," Judge Coney Barrett told Sen. John Kennedy during the Senate confirmation hearings on October 13th.

When asked that same day by Sen. Kamala Harris if she accepts that "COVID-19 is infectious," Coney Barrett said yes. When asked if "smoking causes cancer," Coney Barrett said yes. But when asked if "climate change is happening, and is threatening the air we breathe and the water we drink," Judge Coney Barrett said that while the previous topics are "completely uncontroversial," climate change is instead, "a very contentious matter of public debate." She continued: "I will not express a view on a matter of public policy, especially one that is politically controversial because that's inconsistent with the judicial role, as I have explained."

Judge Coney Barrett repeatedly refused to acknowledge the scientific certainty of climate change. This is an untenable position, particularly when the world's leading climate scholars warned in 2018 that we have just 12 years to act to bring down global average temperature rise and avert the most dire predictions of the climate crisis.
At the moment when the facts of the case were presented to her, this arbiter of justice freely chose to side with mistruths. Judge Coney Barrett's responses are factually inaccurate, scientifically unsound, and dangerous.
How can Judge Coney Barrett rule on pending issues of climate change liability, regulation, finance, mitigation, equity, justice, and accountability if she fails to accept even the underlying premise of global warming? The answer is that she cannot.

Judge Coney Barrett's ties to the fossil fuel industry have already proved problematic, forcing recusal from cases involving Shell Oil entities related to her father's work as a long-time attorney for the company. She may also need to recuse herself from future cases due to her father's former position as chairman of the Subcommittee on Exploration and Production Law of the American Petroleum Institute—the nation's leading fossil fuel lobby.
Climate change is already an increasingly dominant aspect of American life, and an issue of growing import in American law. On the Supreme Court docket is BP P.L.C v. Mayor and City Council of Baltimore—a case that involves Shell, Chevron, ExxonMobil, and other major oil companies, and could impact about a dozen U.S. states and localities suing Big Oil over its contribution to climate change.

Judge Coney Barrett says, "I'm certainly not a scientist," but she does not need to be a scientist, rather she needs to have faith in science. Pope Francis, the head of the Roman Catholic Church, is an ardent supporter of action on climate change, releasing in 2015 the "Encyclical on Climate Change & Inequality: On Care for Our Common Home." The Pope embraces hard science in order to keep close to his faith.

Judge Coney Barrett has displayed a profound inability to understand the ecological crisis of our times, and in so doing she enables it.

Jeff Goodell, climate journalist and author of The Water Will Come

Nina Berman, documentary photographer focusing on issues of climate and the environment, professor of journalism at Columbia University

Ben Depp, documentary photographer, focusing on issues of climate and the environment

Jenn Emerling, documentary photographer, focusing on issues of climate and culture in the American West

Lawrence Weschler, former New Yorker staff writer, environmental author, most recently with David Opdyke, of This Land: An Epic Postcard Mural on the Future of a Country in Ecological Peril.