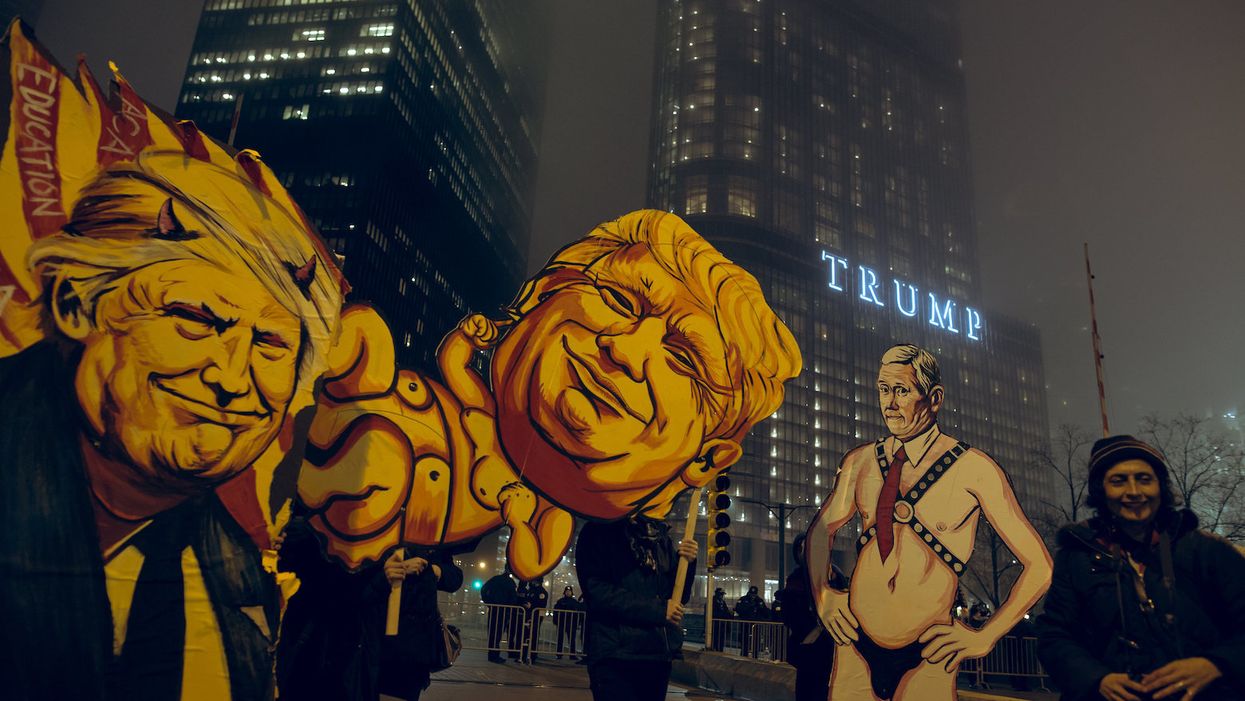 "There's no us versus them—there's just us. Everybody in the world is us."

Shepard Fairey's voice rings out over a haunting Damned Anthem cover of the Muse song "Uprising," as images of recent protests in the U.S. flash across the screen at the beginning of the trailer for a new feature-length documentary, "The Art of Protest." It is a montage of the scenes that have come to define American protests: police lined up in riot gear, a car that was dented after it sped toward a crowd, a woman with a bloodied face, men shouting and carrying Confederate flags, people cheering as a statue is torn down, climate activists carrying a large model of the Earth, a structure on fire and law enforcement aiming pepper spray and water cannons at people from behind shields and tanks.

The film, released for free to the public online in October via the Rolling Stone website, is executive produced and distributed by Zero Cool films. The project was created by the anarchist artist collective Indecline and "Saving Banksy" director Colin Day. Indecline is responsible for many notorious art pieces, including the famed statues of a naked Donald Trump that popped up in cities across the country overnight prior to the 2016 election.

A filmmaker and founding member of Indecline who spoke with the Independent Media Institute anonymously says it was important to the film's creators to include a range of artists—not just the big names.

"We've got people you wouldn't expect to hear from, from different corners of the art world," he says. "[There are] some people who you've maybe never heard of, like Jodie Herrera, an incredible artist out of [northern] New Mexico. I think she's just as good if not better than a lot of the artists that we have in the documentary who are household names."

He said the film offers a "timestamp of this moment," in the lead-up to the critical upcoming election on November 3, and he also hopes it will remain relevant into the future.

"Hopefully, it can serve a double purpose and 15 years from now, you can still put this thing on and listen to Tom Morello [of Rage Against the Machine and Audioslave] or Noodles [of The Offspring] or someone from Indecline talk about why it's important to use your privileges to go creatively fight for people who don't have those privileges or don't have a voice or a platform or the means to do these things."

Day, the film's director, says "The Art of Protest" is the film he and his co-creators at Indecline wanted to watch: a film that could offer insights from artist-activists around the world, across decades, and provide inspiration—even some "how-to guidance"—to the next generation of resistance artists.

"It started with us wishing that [a] movie [like this] existed, so we decided to make it," he says. The film, he continued, is "really about freedom. We feel like that's what's at stake: the freedom not to be brutalized by law enforcement with no repercussions. Because it's looking more and more like that's just a normal thing that can happen to anybody, a 70-year-old man, women, kids, it's a whole spectrum now. We don't want to see that become normalized."

Day says while the team had been working on the film for over a year, interest from artists became "electric" following the police killing of George Floyd on May 25.

"It was almost like a lightning bolt… people wanted to do something," he says. "In the movie, you'll hear a bunch of people talk about using their art to activate people. And that's [one of our goals for the film]… to touch people on a sort of firmware level where they're not even thinking about it, but when they see something like an anti-masker doing something racist in a 7-Eleven, they won't just ignore it. They won't just walk away. They'll have the courage to stand up for what's right."

He says that while he was making the film, hearing from Oakland-based Emory Douglas who created well-known artwork for the Black Panther movement throughout the '60s and '70s was particularly poignant for him.

"The Black Panthers' reputation was run through the mud by the press at the time, and the FBI [targeting the group], and the disinformation that was occurring, but they did a lot of good, a lot of social programs and good work for their communities—which were just being left to fend for themselves," Day says. "I feel [Emory Douglas] should be a household name."

Day adds that he finds Douglas' work inspirational and resonant today, as the current movement toward racial reckoning parallels with protests during the civil rights era. He points to the moment in the 1968 Olympics when Black athletes Tommie Smith and John Carlos raised their fists upon accepting their medals during the national anthem to "protest the treatment of Black Americans," as a parallel with former 49ers quarterback Colin Kaepernick taking a knee during the anthem in 2016, before his team's preseason games, to "protest racial and social injustice."

The filmmaker from Indecline says it was key for the film team to release the project prior to the 2020 election.

"The term 'resistance art' has become a household term, and in the last four years, it's been in your face more than it has in any other time I've been around—definitely since the '70s," he says. "The idea is to put this thing out and have it serve as a call to action."

Indecline began in the Bush administration years as a group of disenchanted "punk skater kids" in Los Angeles for whom street art and punk rock were outlets to protest the general direction the country seemed to be going. It has since grown into a collective that includes artists from a range of mediums and backgrounds across the country. While not solely focused on Indecline, "The Art of Protest" does include many projects of the collective in its decades of bringing resistance art to the public.

"It's hard to explain to somebody who doesn't know who we are, what it is we do, because one week we might write a play and the other week we might be scaling down the side of a building, painting it," says the Indecline member. "We [work with] performance artists, poets, teachers and all kinds of people."

Day says he hopes the film will inspire young and upcoming artist-activists and adds that for him, art provides a way to address the many traumatic realities of the world without losing himself in the trauma. In the same way, he says while the film gets into the difficult territories of protest artists, addressing things like oppression, racism, misogyny and fascism, it also shows the joy and the light that are inherent to art and activism.

"We want it to be positive. There are some intense parts, but we wanted to also show resistance art as fun and welcoming, and something people would want to do. We have artists talking about how art has been good therapy for them, self-help even, and why it's good to be having fun and enjoying yourself when you're fighting against the powers that be," he says. "If we could get an army of people out there creating art, mission accomplished."

In addition to the new film, Indecline recently announced an upcoming exhibit in Las Vegas focused on drawing attention to mass shootings in America, which repurposes 600 decommissioned guns into a sculpture titled " On Second Thought." The piece is a takeoff on the iconic Auguste Rodin sculpture "The Thinker," and went on display on October 1, which is the anniversary of the Route 91 Harvest festival mass shooting in Las Vegas.

Day notes that the film licenses two songs from the English band Idles, which has an album called "Joy as an Act of Resistance."

"For me, that became a mantra this whole last year [2020], because every day it's like a damage report, you feel like you're taking blows," he says. "But when I see that album [by Idles] and I hear those words… it is kind of true that just having fun, that in itself is a form of resistance nowadays. Not letting them destroy you emotionally or psychologically, that's a win."