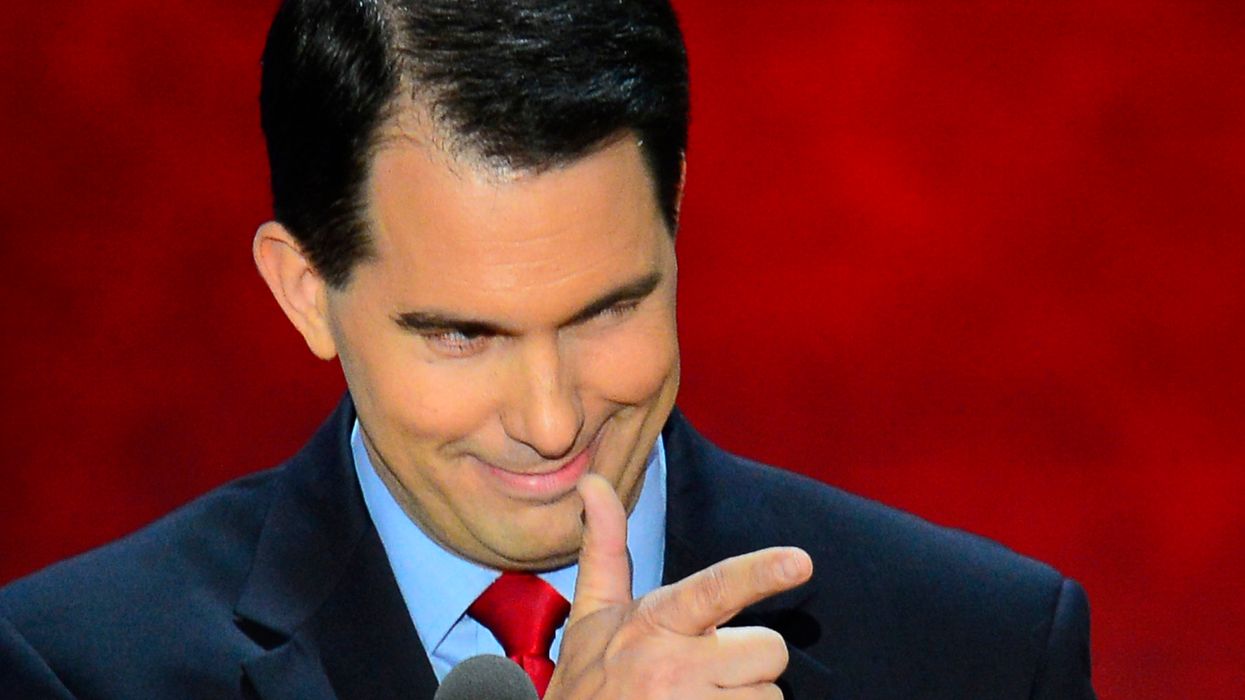 From the beginning, the Republican-promoted, Trump-boasting, former Gov. Scott Walker-lying Foxconn deal with Wisconsin sounded like a mega-scam. It was clear to anyone with a reading level above elementary school that the "incentives" used to bring the Taiwanese electronics giant into the Badger State were so much more lucrative than anything Foxconn could provide in economic stimulus. The math didn't add up. In fact, some estimates put the timeframe it would take Wisconsin to get out of the red on the deal at … 25 years.

Then, over the course of the next few weeks and months and years, it became clear that Foxconn wasn't going to do any of the things it said it might do, because frankly, it didn't have to do them to get that sweet Wisconsin taxpayer money. Invisible hand of the market and all that. This left lots of vacant space where Trump and then Gov.-Scott Walker took gold-shoveled photos at. Most of 2019 was spent with Wisconsin officials, having been left holding the bag of bunk that newly un-elected Scott Walker created, trying to renegotiate with Foxconn. Something that Foxconn officials, having experienced the pathetic dealmaking of the previous Republican administration, seem most interested in delaying. Possibly in the hope of finding another set of GOP marks with which to renegotiate.

Then on Oct. 12, The Verge reported that the Wisconsin Economic Development Corporation (WEDC) denied Foxconn's application for tax subsidies. The argument is that Foxconn hasn't even built anything that was originally agreed upon.

WEDC also noted that even if whatever Foxconn is currently doing had been eligible under the contract, it had failed to employ the minimum number of people needed to get subsidies. Foxconn needed to employ at least 520 people at the end of 2019 to receive subsidies and claimed to have hired 550, but WEDC estimated that only 281 would qualify under the terms of the contract.

What is most important to note here is that even in a deal that Foxconn was getting away with murder on, they still wanted to cut corners because the previous Republican administration was so bereft of sense that it put little regulations in place for the deal and seemed to be such cowardly pushovers to big money. Why negotiate with Democratic representatives and agents who actually want something resembling a fair deal when you can wait and hope that a new set of Republican con men hacks show up after Election Day?

The other issue that Foxconn faced was that just because Walker was willing to take constituents' money and line Foxconn CEO Terry Gou's pockets with it, that didn't mean the deal was commercially viable for Foxconn. It turns out it wasn't.

Since Democratic Gov. Tony Evers took office, Foxconn has flirted with renegotiating the contract since they seem to have zero interest in even coming close to the bogus promises of the original one made with Walker and friends. According to The Verge, a settlement agreement seemed to have been reached this past July between the WEDC and Foxconn, but that deal expired without another deal in place. The tax subsidies being withheld from Foxconn would have been the "first installment of the nearly $3 billion in refundable tax credits that made up the bulk of former Gov. Scott Walker's record-breaking subsidy package."

But don't you worry—Donald Trump is on the job.

Bad news: Donald Trump is a pathological liar. It turns out that not unlike the rest of the Foxconn deal, this was all for show. Sort of like the $100 million gift to the University of Wisconsin at Madison promised by Gou. Turns out the school received about $700,000 from Foxconn.

In an investigation conducted by The Verge, Foxconn attempted to boost hiring numbers right out of the gate, giving jobs out with no descriptions, just trying to hit the numbers that would allow them to make profits off of tax subsidies alone. These "jobs" would be and were very quickly dropped. Their business deal, so pathetically constructed by Walker and promoted by Trump and other Republicans, meant that it was better business for them to make some fake jobs up and not even really consider building out a business that might actually manufacture anything.

"Imagine being in a job where you don't really know if it's real or not. Or you know it's not real, but you don't know it's not real. It's a constant thing you're doing in your head day after day," said one employee, who returned to the rented building Trump had spoken at, where workers had been assembling TVs, only to find the line shut down and the lights dimmed a couple of weeks after the photo op was over. "I think all of us were on the verge of a major breakdown."

According to the investigation, while this deal is likely kaput, it has cost Wisconsin taxpayers at least $400 million in land and infrastructure. People were pushed out of their homes. Foxconn, who promised it would build a 20 million-square-foot LCD complex, has built an empty building 1/20th the size that it now says will be for "storage." Walker and friends promised 5,200 jobs by the end of 2020. There will be less than 281 by the end of this year.

The Foxconn story has been one of scam idea after scam idea. Business plans continuously changing in order to keep up the illusion that work was being done to create something that would warrant Foxconn's hiring of 580 workers for long enough to get some tax money. Like Donald Trump and the Republican Party, it was all an inflated lie that crashed before they could grab the last bit of money left on the table.