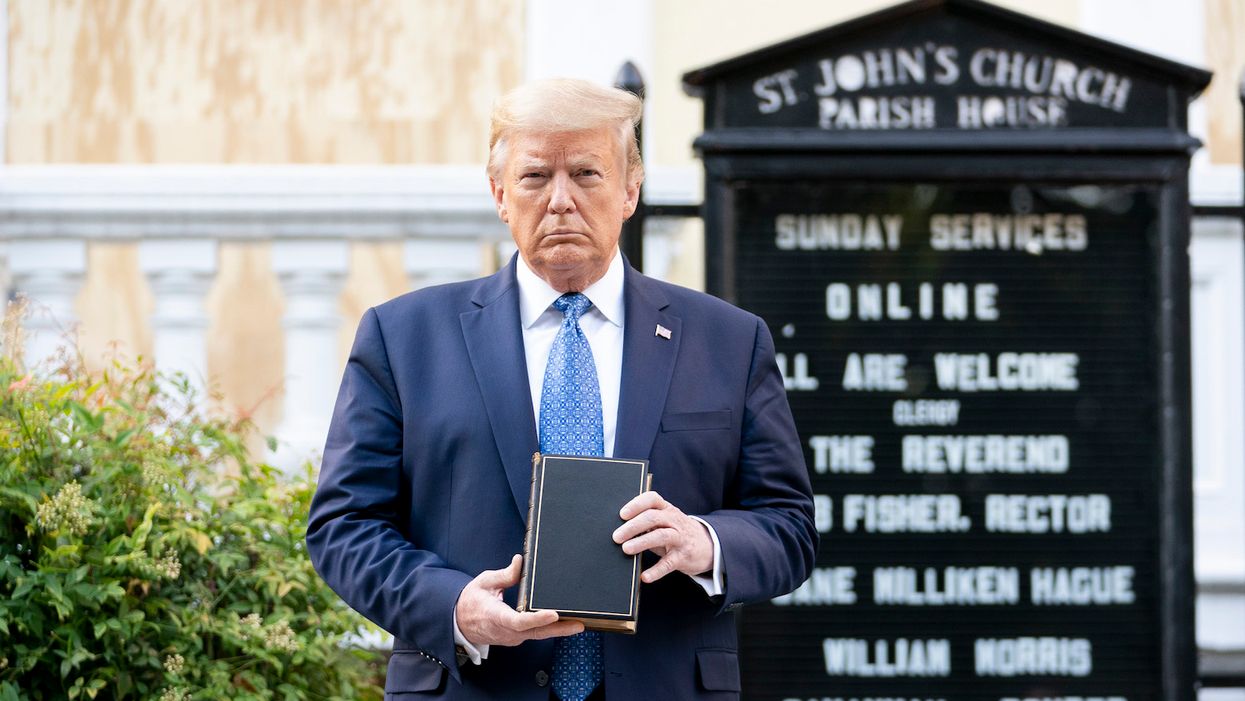 President Donald J. Trump walks from the White House Monday evening, June 1, 2020, to St. John's Episcopal Church, known as the church of Presidents's, that was damaged by fire during demonstrations in nearby LaFayette Square Sunday evening. (Official White House Photo by Shealah Craighead)
The Conversation
October 27, 2020

It's yet unknown how U.S. President Donald Trump's attempts to position himself as the Christian candidate of choice will influence Christian voters in the United States — and how Democrats' attempts to speak to Christians may sway previous Trump voters or those not publicly declaring their intentions.

These statements fit a wider pattern: Trump has called himself “the chosen one," proclaimed that God is “on our side" and warned that Biden will “hurt the Bible, hurt God."

The Trump administration and its Christian supporters have been using Christianity to draw battle lines in this high-stakes election. This Republican political strategy that uses Christian language to cast Trump as a divinely appointed protector of Christians warrants more scrutiny than it's received.

In my book, Republican Jesus, I identify key trends in the way today's right-wing influencers interpret the Bible: they view Jesus as a prophet of free-market capitalism who opposes taxes and is against any regulation that supports social welfare programs, protects workers or prevents discrimination.

The Trump administration and their Christian supporters promote a form of Christianity that scholars call “Christian nationalism." That's an ideology that isn't just about religion, but “includes assumptions of nativism, white supremacy, patriarchy and heteronormativity, along with divine sanction for authoritarian control and militarism," according to sociologists Andrew Whitehead and Samuel Perry.

They've demonstrated with survey data that about half of Americans support some form of the idea that America is, and should be, a Christian nation. Christian nationalists are especially fond of boundaries — not just walls, but also social boundaries that cast liberals as outsiders.

These sociologists say about 20 per cent of Americans are “ambassadors," an overwhelmingly white group that insists the U.S. has always been and must remain Christian. Another 30 per cent are “accommodators," who lean toward supporting Christian nationalism but hold somewhat more ambivalent views (for example, they say that “Christian values" should influence society but might allow that non-Christians also advance these values).

When pro-Trump Christians use the language of Christianity under siege, their foremost objective is to court the votes of these “accommodators."

As historian Kevin M. Kruse argues, “the belief that America is fundamentally and formally a Christian nation originated in the 1930s when businessmen enlisted religious activists in their fight against FDR's New Deal." These corporate-funded conservatives claimed that the social safety net breaks the commandment not to steal — that the government steals taxes from individuals to reward the indolent.

They cast Christianity as the free-market antidote to “pagan stateism": a menace they created to conflate progressive forms of Christianity with communism, socialism and Nazism.

Dogmatic adherence to free-market capitalism and limited government is the common thread in the history of the American Christian right. By this logic, anyone who favours a more regulated form of capitalism attacks Christianity.

In the Civil Rights era, some religious conservatives insisted that the desegregation of public schools was government overreach and a threat to religious freedom. Since Roe vs. Wade, they have characterized abortions as the government robbing unborn citizens of their rights.

On Sept. 26, Rev. Franklin Graham, son of Billy Graham and among the most influential pro-Trump evangelicals, hosted a massive prayer march that drew thousands to Washington, D.C.

The broadcast's refrain was “this is not a political event, but a prayer event." Yet speakers repeatedly invoked the myth that America was founded as a Christian nation as the march proceeded on a path through the National Mall (with no social distancing and limited masks).

It was scheduled just before Trump's announcement of a conservative Catholic judge who has ties to a charismatic and secretive Christian group as his Supreme Court nominee later that day.

Every speaker was a vocal Trump supporter, Vice-President Mike Pence made a “surprise visit," and marchers wore both “Make America Great Again" and “Let's Make America Godly Again" hats and chanted “Four more years!" Tony Perkins, president of the Family Research Council, prayed for law enforcement because “lawlessness has been unleashed" in America — an indictment of the Black Lives Matter protests.

It may be obvious that American Christian Democrats and some Christians are outraged by pro-Trump Christians. But as an American teaching Christianity at a public university in Canada, I have noted that a number of my students and colleagues who identify as “evangelicals" or “conservatives" are similarly outraged by how Trump's top evangelical advisers cherry-pick and distort biblical verses to justify xenophobic immigration policies and restrictions on the government's role in regulating health care, environmental protection, gun control, employment and the social safety net.

Whereas conservative Christians outside the U.S. tend to share the same “family values" positions (traditional marriage, pro-life) as conservative American Christians, they are less often inclined to agree with their economic conservatism.

The Christian nationalism and economic conservatism advocated by Trump can be perplexing to Christians unfamiliar with the American Christian right's history of reading the Bible as a blueprint for unfettered free-market capitalism at the expense of the poor. In the New Testament, after all, Jesus calls on the rich to sell their possessions and give them to the poor, and speaks of loving one's neighbours and enemies.

To some who advocate Jesus's platform of social justice, advancing different views in the language of Christianity can warrant being called a “fake Christian" or a deluded devotee of the “cult of Trump." I caution against these labels, however, since such exclusionary rhetoric diverts attention from how the American right is busy redefining what it means to be “Christian" for their own political agenda.

Democrats' efforts to challenge the right's attempt to own Christian identity and values could be critical in the final days of the campaign. In the vice-presidential debate, Kamala Harris stated: “Joe Biden and I are both people of faith" in response to Mike Pence's insinuation that Democrats are attacking Christianity. If it were not for the attention the right's influencers receive, Harris would not have had to make this statement.

The Poor People's Campaign: A National Call for Moral Revival is calling for “coming together to confront the interlocking evils of systemic racism, poverty, ecological devastation, militarism and the war economy, and the distorted moral narrative of religious nationalism." Christian activists Rev. Dr. William J. Barber and Rev. Dr. Liz Theoharis helm this movement organized on the basis of values. It's supported by interfaith bodies like The Islamic Society of North America and the Religious Action Center of Reform Judaism.

Meanwhile, the mainstream media, politically moderate and liberal Christian leaders and progressives on the whole must hold the Christian right accountable for their exclusionary doublespeak and their highly selective readings of the Bible and American history.