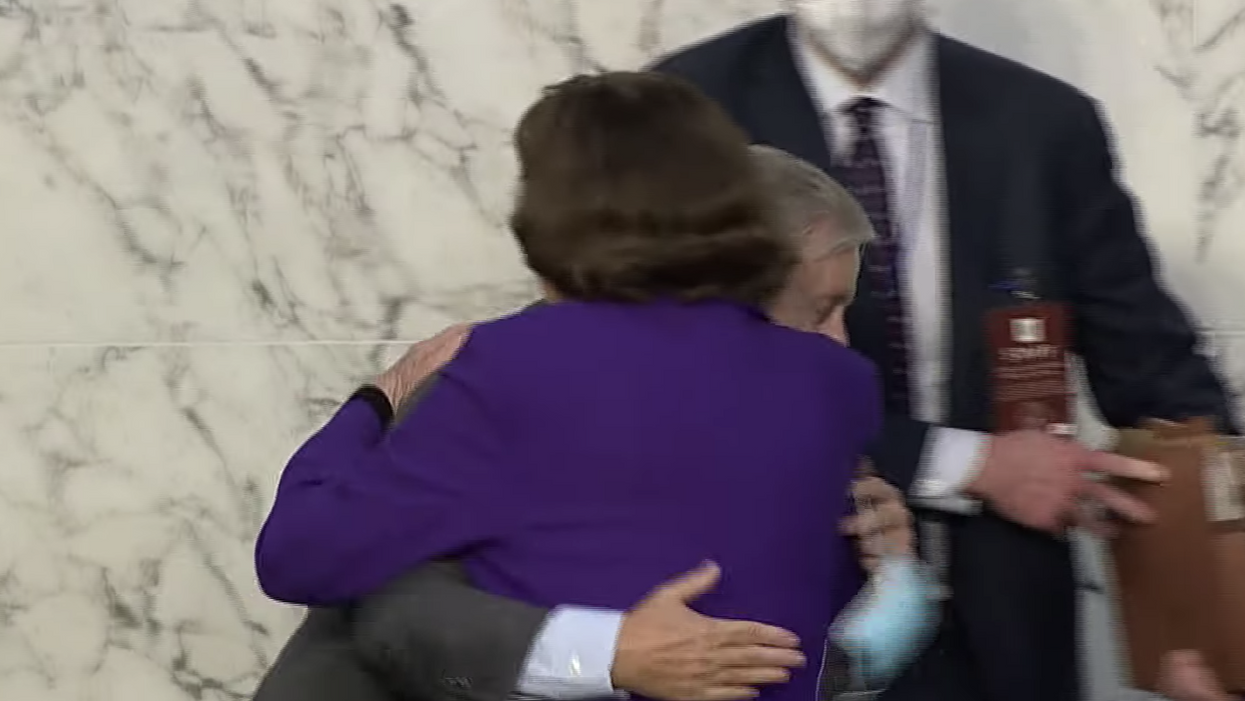 Angered by her soft approach during this week's confirmation hearings for President Donald Trump's Supreme Court nominee Amy Coney Barrett—on top of her failure to embrace progressive reforms to the nation's highest court—the head of a progressive judicial watchdog group on Thursday called for Sen. Dianne Feinstein's removal as the leading Democrat on the Senate Judiciary Committee.

"It's time for Sen. Feinstein to step down from her leadership position on the Senate Judiciary Committee," said Brian Fallon, executive director of Demand Justice, in a statement. "If she won't, her colleagues need to intervene."

During Tuesday's hearing for Barrett's confirmation, Fallon was among the many vocal critics of Feinstein's performance.

This is painful. Enough with this nonsense line of questioning premised on the idea that we don't already know ACB… https://t.co/BivVXCxBXD
— Brian Fallon (@Brian Fallon)1602597156.0

Why is Feinstein acting like it's an open question whether Barrett wants Roe overturned? We already know the answer… https://t.co/vIuZeceLoD
— Brian Fallon (@Brian Fallon)1602596279.0

In his statement on Thursday, Fallon argued that Feinstein "has undercut Democrats' position at every step of this process, from undermining calls for filibuster and Court reform straight through to thanking Republicans for the most egregious partisan power grab in the modern history of the Supreme Court."

With Republicans set to ram through a vote on Barrett next week—scheduling a committee vote for Thursday and a floor vote in the Senate on Friday—Democrats have proved unable, or in the minds of some unwilling, to do anything to stop it.

As Elie Mystal wrote for The Nation on Thursday, the only solution to the Barrett "debacle" is expanding the court once Democrats win back the Senate.

"The argument for court expansion is often presented as retribution for Republicans messing with the court, first by blocking the nomination of Merrick Garland, now by rushing the appointment of Ruth Bader Ginsburg's successor," noted Mystal. "But there is a higher purpose for court expansion, one that goes beyond avenging Ginsburg and Garland. Expanding the court now—through raw political power, if necessary—is the best way to reform and depoliticize the court for future generations. Expanding the court is the way to save it. It's a lot like breaking a bone to reset the leg."

While progressive voices, and many Democratic lawmakers, have been increasingly strident in their call for increasing the number of the justices on the Supreme Court, Feinstein has not made her position on the subject known. Asked last month by a New York Times reporter if she would support an expansion, Feinstein responded: "Ask me when we win the majority."

But offering his assessment, Slate's Mark Joseph Stern tweeted Thursday that expanding the Supreme Court is the only viable option for Democrats if they want to actually win the kind of future they say they believe in:

For Fallon, Feinstein's failures—from putting decorum before principles during this week's hearings to dismissing a new generation of Democratic activists clamoring for change like she did with Sunrise Movement climate campaigners in her offices last year—can no longer be tolerated.

Keeping Feinstein as the top Democrat on Judiciary Committee is a monument to our side's weakness on the fight for the courts.
— Brian Fallon (@Brian Fallon)1602787501.0

"If Senate Democrats are going to get their act together on the courts going forward," Fallon said, "they cannot be led by someone who treats Sunrise activists with contempt and the Republican theft of a Supreme Court seat with kid gloves."