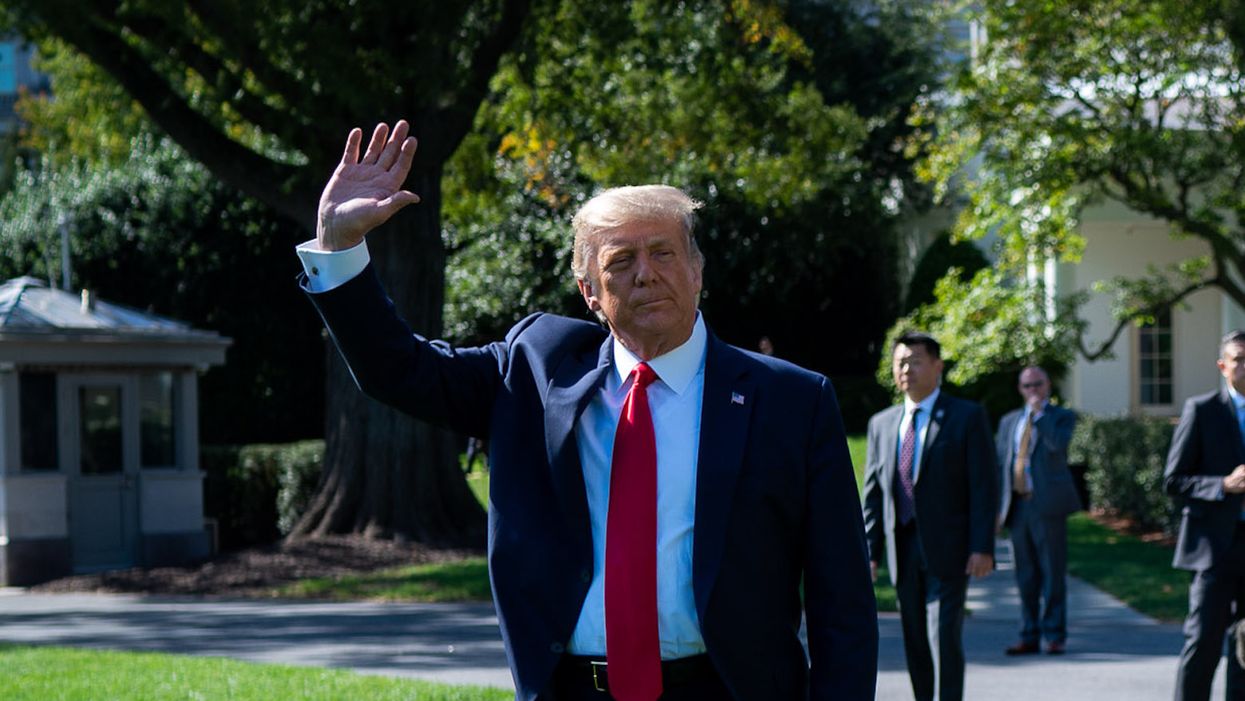 Contrary to the notion that the coronavirus "snuck up" on President Donald Trump just as it did far less powerful people across the U.S. and around the world, Trump's announcement Friday that he tested positive for Covid-19 was—according to progressive critics—a direct and foreseeable consequence of the president's months of lying, callous disregard for public health, and catastrophic mishandling of the federal government's pandemic response.

"Trump's diagnosis is the culmination of six months of recklessness and failure, the ultimate, inevitable end of his administration's disastrous response to a global pandemic."
—Alex Shephard, The New Republic


In a tweet Friday morning, author and environmentalist Naomi Klein drew a striking analogy in an effort to place Trump's diagnosis in the broader context of his administration's failure to take the steps necessary to combat the pandemic—a failure that has resulted in more than 200,000 dead Americans and counting.

"Trump getting Covid is the epidemiological equivalent of a mass shooting where the shooter opens fire on a crowd and then turns the gun on himself," Klein wrote. "Not a tragic accident—a crime scene."

Klein repeated her argument in an interview on Democracy Now! and warned that the U.S. public must be "prepared for the president using the fact that he's having to cancel campaign events for two weeks to try to further delegitimize elections."

Since the coronavirus first began spreading at a rapid pace throughout the U.S. in March—forcing entire swaths of the economy to shut down and throwing countless lives into chaos—Trump and members of his administration publicly minimized the threat posed by Covid-19 and dispensed with the safety recommendations of experts, refusing to take simple life-saving steps like wearing face coverings and avoiding large gatherings.

Instead, the president did the opposite, knowingly spreading misinformation about the pandemic to the public, questioning the effectiveness of masks, and holding large indoor campaign rallies that threatened the health of the thousands in attendance as well as those they later came in contact with.

"Trump's diagnosis is the culmination of six months of recklessness and failure, the ultimate, inevitable end of his administration's disastrous response to a global pandemic," The New Republic's Alex Shephard wrote Friday. "Above all, his actions over the past six months reflect his extraordinary selfishness and cruelty. Other people get the virus. People in blue states get it. People of color get it. The elderly get it. Donald J. Trump doesn't get it—he can go about his life, however he pleases, ignoring the devastation around him."

"Trump has spent his entire life avoiding the consequences of his actions, from his business failures to his toxic politics. That changed on Thursday evening," Shephard continued. "No one would wish Covid-19 on anyone, not even Trump, but the president has spent the last six months desperately attempting to change the subject. Now, with less than a month before the election, he's paying the price."

Hours before announcing that both he and First Lady Melania Trump tested positive for the coronavirus, Trump said during a dinner at the White House Thursday evening that the "end of the pandemic is in sight"—echoing a sentiment he has expressed repeatedly since late February, when he wrongly predicted that the number of U.S. cases would be "close to zero" by the end of that month.

"That's a pretty good job we've done," Trump said at the time, a rosy assessment of his own performance that the president doubled down on late last month even after the U.S. coronavirus death toll topped 200,000.

In a statement Friday afternoon, Sen. Elizabeth Warren (D-Mass.) said her "thoughts are with the president, first lady, White House staff, and anyone else who may have come into contact with the president, and I wish them all a quick and safe recovery."

"My thoughts are also with millions of other Americans who have survived Covid-19 or are still sick," said Warren. "With the more than 200,000 Americans that we've lost, including a disproportionate number in Black and Brown communities. With the millions of Americans who can't get the help they need and worry about how they'll pay their bills."

"The president spent months undermining the work of our doctors and scientists, while he failed to help states and communities contain the outbreak. He mocked people for wearing masks and held super-spreader events that disregarded the health of thousands," Warren continued. "Today's news should serve as a reminder that listening to scientists, wearing a mask, washing hands, and social distancing are our best tools to fight this horrific disease."

News of Trump's positive coronavirus test touched off frenzied speculation as to who the president may have infected after he possibly contracted the virus from his close aide Hope Hicks, who tested positive Thursday after showing symptoms on Wednesday—facts the White House tried and failed to keep hidden from the public.

"A small group of White House officials knew by Thursday morning that Hicks had contracted Covid-19," CNN reported Friday, "but Trump still took a trip to New Jersey for a fundraiser, and press secretary Kayleigh McEnany still held a news briefing at the White House on Thursday."

Completely irresponsible. He endangered the life of everyone he came into contact with. https://t.co/k8yZpwJvmn
— Renato Mariotti (@Renato Mariotti)1601644672.0

Asked about the possibility that the White House coronavirus outbreak has spread to members of Congress, Senate Majority Leader Mitch McConnell (R-Ky.) told reporters Friday, "We don't know. It can sneak up on you as it did with the president and the first lady. So we're keeping an eye on everyone."

Just before noon Friday it was reported that Sen. Mike Lee (R-Utah) had also tested positive for the coronavirus.

"Since the spring, the White House has had multiple positive cases, including several people who have direct contact with Trump," Murphy added. "And yet he didn't wear a mask at public events or private meetings at the White House."

Jeet Heer, national affairs correspondent at The Nation, argued Friday that Democrats, including Democratic presidential nominee Joe Biden, "should not shy away from using news of Trump's Covid test to hammer home the lesson that he has bungled the crisis."

"Now is not the time to be euphemistic about Trump's recklessness. His disregard for basic health protocols has been bad not just for himself and his staff, but also for countless Americans," wrote Heer. "A president contracting a disease thanks in large part to his own rashness is a political fact as well as a personal one. We can express, if we are so inclined, sympathy on a human level for Trump, but his thoughtlessness has wider consequences that need to be called out."