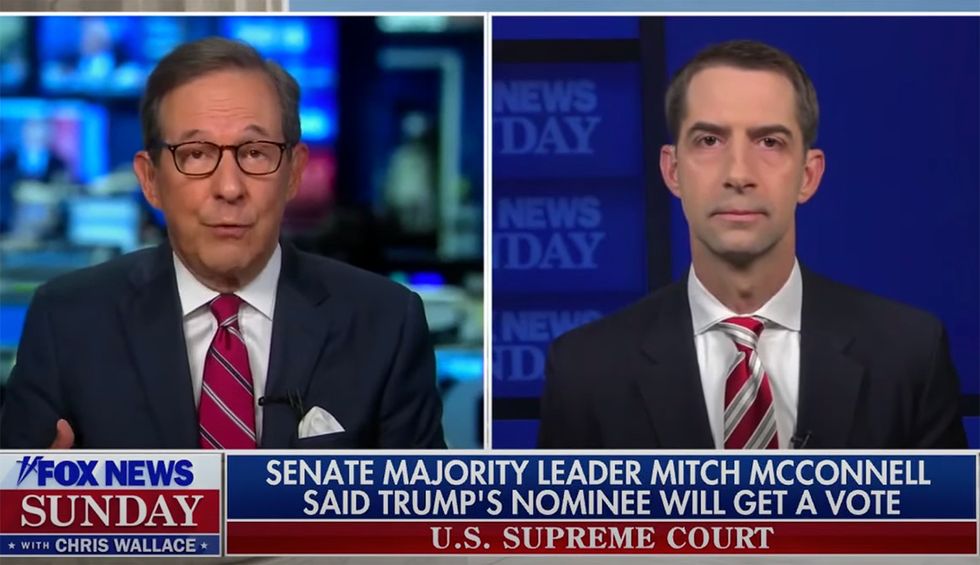 “Why the rush to judgement?” Wallace asked Cotton after the senator promised a swift vote on President Donald Trump’s eventual nominee.

“Senate Republicans blocked the choice of Garland,” Wallace noted before playing a clip of Cotton defending the move at the time.

In the clip, Cotton notes that the country will have a new president “in a few short months.”

“Why would we cut off the national debate about this next justice?” Cotton says in the clip. “Why would we squelch the voice of the people, why would we deny the voters a chance to weigh in on the make up of the Supreme Court?”

For his part, Cotton argued that Republicans won the Senate in 2014 to stop President Barack Obama’s judicial nominations, and then he claimed that the current Republican Senate is in power to uphold nominations by President Donald Trump.

“You really don’t think there is any hypocrisy at all,” Wallace pressed, “in saying, we need to give voters — because you can parse the 2014 election, the 2018 election any way you want — but you stated a pretty firm principle in 2016 about Merrick Garland: It’s wrong to deny voters a chance to weigh in.”

“You don’t see any hypocrisy between that position then and this position now?” the Fox News host wondered.

“Chris, the Senate majority is performing our constitutional duty and fulfilling the mandate that the voters gave us,” Cotton opined.