Trump appears to be inviting a constitutional crisis 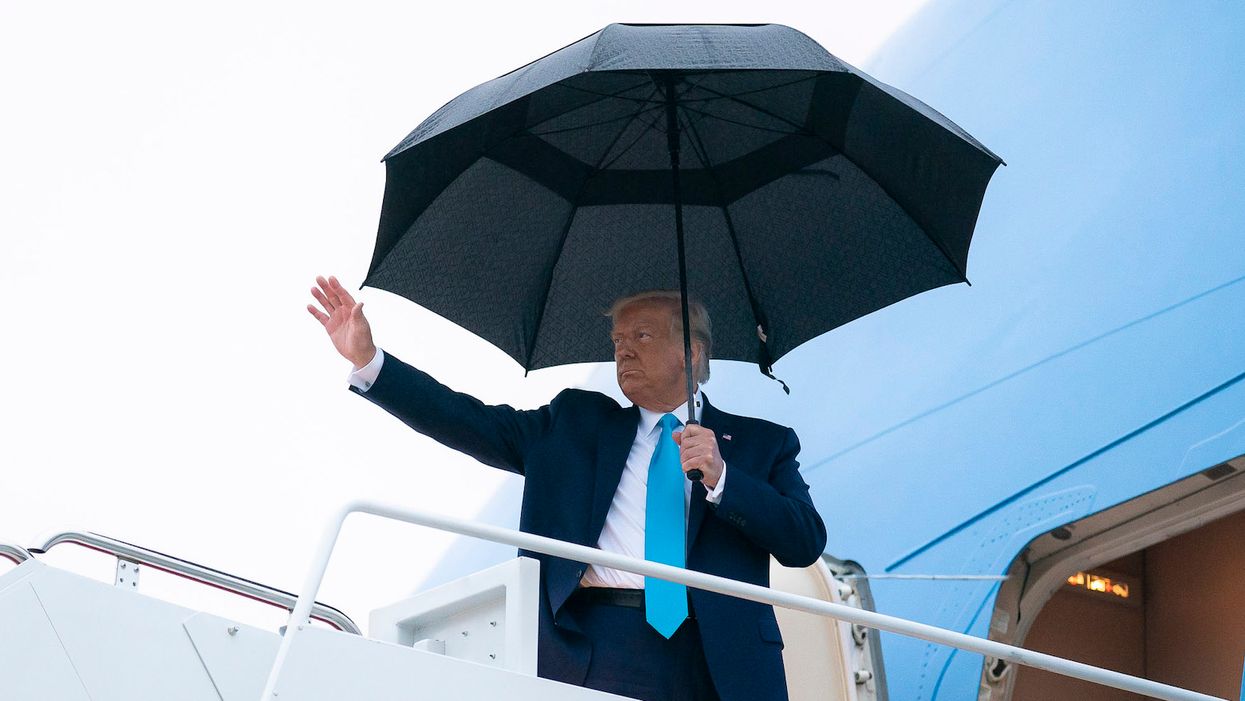 In the first televised presidential debate, President Trump questioned the ability of America's election officials to conduct an honest election this fall and said that he would not sit idly by "if I see tens of thousands of ballots being manipulated. I can't go along with that."

"It means you have a fraudulent election," Trump continued, speaking over moderator Chris Wallace of Fox News, who asked both candidates if they would pledge to not "engage in any civil unrest" and "not declare victory" until all of the votes had been counted.

Never before in modern history has a presidential debate ended with the incumbent refusing to say whether he would accept the results of an upcoming election and not agreeing to an orderly post-Election Day process—and the challenger saying that it doesn't matter what the incumbent mistakenly believes, if he's voted out of office he will have to leave.

Beyond Trump's nonstop interruptions, accusations and bellowing that marked the debate, the president appeared to be inviting a constitutional crisis if the margins are close in swing states and the results were not known on Election Day, November 3—which they almost certainly will not be, because, as Wallace noted, eight states only start processing absentee ballots that day.

Trump also said that he expected the U.S. Supreme Court to get involved—including the participation of his latest nominee, Amy Barrett, if she is seated by then.

"I am counting on them [the Supreme Court] to look at the ballots, definitely," Trump said, in response to Wallace's question. "I hope we don't need them for the election itself. But for the ballots, I think so. Because what's happening is incredible. I heard, I read today, where at least 1 percent of the ballots for 2016 were invalidated. They take 'em. 'We don't like them. We don't like them.' They throw them out left and right."

Trump's false claims about widespread voter fraud in absentee—or mailed-out—ballots was not new. But the intensity of his belief that the 2020 election outcome was rigged against him unless he wins (which he also said in 2016) reached a new pitch in Tuesday's debate. Trump's misrepresentations of the voting process were as shrill as they were rampant, but, in sum, Trump basically said that he all-but expected to aggressively assail the election results.

What was most notable about Trump's assertions—beyond a demeanor that hovered between being anxious and unhinged for most of the debate—was that he repeatedly cited instances of mistakes in the voting process affecting a literal handful of votes. He had no perspective or sense of scale, whatsoever, that the issues he saw were rare exceptions and not the rule.

His rant about military ballots in a waste basket referred to a now-fired temporary election worker who mistakenly threw out 9 ballots in Luzerne County, Pennsylvania, last week—of which two ballots did not contain Trump votes, despite what he said. That error should have been easily resolved by local election officials, but the Justice Department heard about it and opened an investigation in a state where 6 million people voted for president in 2016.

Trump cited other examples that showed blemishes, not fatal flaws, with locally run elections. He railed that his supporters were not allowed to observe early voting in Philadelphia on Tuesday, which he called a crooked city. The reality was no election observers had been credentialed yet. He said mailmen in West Virginia were "selling the ballots," which referred to one person who authorities caught and prosecuted, showing that the system worked, as Amber McReynolds, executive director of the National Vote at Home Institute (NVAHI), said after the debate.

"People on both sides of the aisle should be outraged by the level of misinformation about safe options for voters," NVAHI tweeted. "Voting by mail is a fundamental part of American voting. They deserved to hear the facts tonight."

Biden didn't allow Trump's assertions and propaganda to go unanswered. His opening comments in the debate's final segment, on accepting the results and pledging not to foment civil unrest, was one of many attempts to factually talk to Americans about voting.

"His own Homeland Security director and, as well the FBI director, says there is no evidence at all that mail-in ballots are a source of being manipulated and cheating," Biden said. "The fact is there will be millions of people because of COVID voting with mail-in ballots, like he does, by the way. He sits behind the Resolute Desk [in the Oval Office] and sends his ballot to Florida."

Biden said Trump's smear of election officials and voting by mail—the healthiest option for many people in the pandemic—was a continuation of his effort to suppress voter turnout.

"This is all about trying to dissuade people from voting because he's trying to scare people into thinking that it will not be legitimate," Biden said, before pivoting to his message.

"So, vote, just vote. Make sure you understand that you have it in your control to determine the way this country going to look like for the next four years," he concluded. "Is it going to change or are you going to get four more years of these lies?"

But just because Biden said that Trump will have to accept the election's results once the votes are all counted does not make it so. Biden was correct that the surest way to end Trump's presidency was with unassailable vote margins, which include the incomplete tallies on Election Night (which are from polling places, and, depending on the state, varying percentages of absentee ballots.) But Trump is counting on tight but incomplete early returns where he can exaggerate the problems that always surface on Election Day to discredit the popular vote.

Trump wants the Supreme Court to step in, he said during the debate. He did not say that he has also talked about red state legislatures appointing Electoral College slates that back him—disregarding their vote counts. Or other scenarios where he can retain the presidency.

"This is going to be a fraud like you've never seen," Trump said. "When you have 80 million ballots swamping the system, you know it can't be done. You know it can't. And already there's been fraud… it's a disgrace."