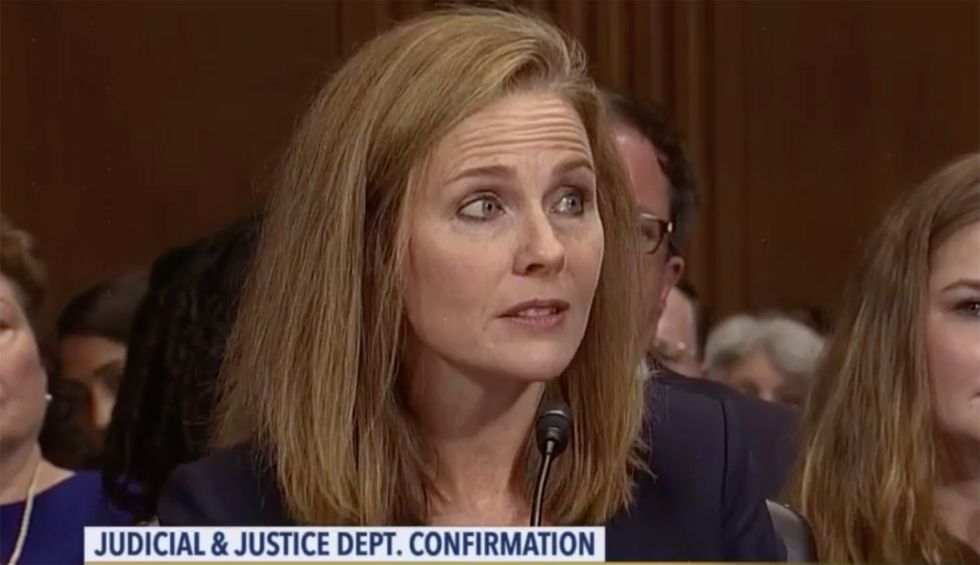 In a just universe, Republicans would be held to the “rule” they created in 2016, and there would be no Supreme Court nominee until 2021. Then Joe Biden could nominate Rep. Ilhan Omar. Sure, Omar doesn't have a law degree, but cleaning up all the exploding right-wing skulls would make a good jobs program, and be a great boost to the nation in so many ways. Then Omar could withdraw, Biden could nominate Sherrilyn Ifill or Cecillia Wang, and Republicans can act relieved, while we all go home happy.

In this darkest-of-all-timelines, the Donald Trump has already made it clear that a nominee is coming double-quick. Meanwhile, Mitch McConnell is holding up his catcher’s mitt, ready to guide that incoming fastball across the plate before anyone has a chance to blink. Democrats have ways to push back—not least of which involves putting a few million people on the streets in righteous protest—but there is little doubt that Trump will soon have a nominee incoming and Republicans will be falling over themselves to proclaim them the greatest jurist ever; just as William Barr is the world’s best prosecutor even though he’s never tried so much as a shoplifting case.

So here are a few possible names that might soon be visiting the Senate express lane to a lifetime appointment.

Aware that Justice Ruth Bader Ginsburg was nearing the end of her fifth battle with cancer, Trump lined up an expanded list of candidates earlier this week. All of these candidates are of the expected ultra-conservative Federalist Society-approved variety—including three Republican Senators. But there’s no guarantee that, now that it’s time to execute, Trump won’t go off script.

Considering the importance of Justice Ginsburg as an icon of women’s rights, and the Republican desire to please their base by filling this slot while simultaneously not generating an absolute implosion that turns the Supreme Court into the only bastion of conservatism, there’s a fair chance the nominee coming from the Trump White House will be a woman. Those odds are bolstered because Trump is already way below water with women voters, and filling Justice Ginsburg’s just-vacated chair with another pompous white male would not exactly endear him to the voters he needs to win critical states.

Fortunately for rights-hating Republicans, there’s a ready-made nominee in the form of Amy Coney Barrett. As far as conservatives are concerned, Barrett has it all: She’s a former clerk for Antonin Scalia who likes to repeat anecdotes about the former justice, while swearing her allegiance to his most conservative rulings; she’s ready to take a massive pickaxe to the wall between church and state, as well as women’s rights, as another conservative Catholic on the bench; and while she has said she thinks overturning Roe is “very unlikely,” she’s never said she wouldn’t wholeheartedly join an attempt to carve it away. She’s a hard line “originalist,” a big favorite of the right, and was the nominee many expected instead of Kavanaugh. She has to be at the front of any list.

The biggest reason that she might not get it could be that Trump simply doesn’t like her.

There are other women on Trump’s short list—including Appeals Court Judges Bridget Bade and Barbara Lagoa—both both are less likely than Barrett. Of the two, Lagoa has a decided edge for purely political purposes. First, she’s from Florida, a state that’s been decidedly leaning toward Biden in polls up to this point, but is not so far in Biden’s pocket that Trump’s team feels it’s out of reach. In fact, Trump is well aware that should he lose Florida, finding the electoral votes to make up for it elsewhere is very unlikely.

So … Lagoa. She would also give Trump the opportunity to brag about naming the second Latinx member of SCOTUS. It’s exactly the kind of showy “see, I’m not a racist” thing that appeals to Trump, because it in no way requires him to be any less racist.

Should Trump decided that his flood cannot go any lower when it comes to gaining votes from women, former Solicitor General Noel Francisco is a solid possibility. Not only is Francisco yet another former clerk of Scalia, giving him instant cred with the far right, he’s already appeared in the Supreme Court multiple times as a lobbyist-lawyer, there to knock down government oversight. That includes being the guy who argued against requiring company health insurance plans to cover contraception, and being the guy who argued that government officials could accept just about anything other than a personal check without it constituting bribery. In the role of Solicitor General, Francisco earned Trump’s favor by defending the Muslim ban and leading the fight to keep Congress from seeing the full Mueller report. He also jumped in to defend the DOJ’s decision to withdraw charges against Flynn. Trump likes him … he’s pro-corruption, what’s not to love?

On paper, Landau is is the check, check, checkity check of checking boxes for a conservative nominee. He not only clerked with Scalia, he also clerked for Clarence Thomas. So he learned to be both a garrulous asshole and a silent asshole. He’s sitting on a stack of Harvard degrees and honors which would probably allow Trump to make some kind of crack about Obama (always a win), he’s argued nine cases before the Supreme Court, and he spent the bulk of his career acting as an appeals attorney for rich corporations. It’s quite the resume. And then Trump named him ambassador to Mexico … because he was born in Spain, and Trump has already demonstrated that he thinks everyone even possibly born outside the United States is Mexican. However, Landau is 56 and seems to excite no one. So, not a list-topper.

Hardiman has actually been on the Appeals Court long enough that he doesn’t owe his position to Trump—which is probably why he’s been on the official “short list” for Trump’s two previous nominations, but never walked off with the prize. At 55, he’s on the border of not giving the Republicans the “dominate for decades” position they want. Even though he’s been a hard-core supporter of capital punishment, an extreme supporter of gun rights, and a supporter of qualified immunity for police, his constant bridesmaid-not-bride role seems to make him less likely.

There is a whole stack of people in the middle tier.

This group is easily defined by three names: Tom Cotton, Josh Hawley, and Ted Cruz. In that order. Of the senators on the list, only Cotton has really expressed an interest in the job, but that doesn’t mean the other two aren’t dying for the opportunity.

Hawley is particularly dangerous because he is actually not a screaming numbnut—he just plays one on TV. He’s an utterly amoral, self-serving, well-nigh-sociopath who is also young enough to give monstrous rulings for decades … which just might make him a surprise pick, despite his avowed disinterest.

Ted Cruz isn’t going to get it because treating Ted Cruz like s#it while Cruz grovels is one of the great pleasures of Trump’s life. Watch him put Cruz on the short list. Just watch.

… Donald Trump. If the polls were showing Biden with a bigger lead, Donald Trump might nominate the only man who knows more than all the scientists, all the doctors, and all the generals, because he surely knows more than all the judges. But since Trump thinks he’s still in this thing, and the Court nominee actually stands a chance of deciding the outcome of the election, Trump might go with someone he trusts. Meaning it’s either Ivanka or Jared. Sorry, Don Jr.

Practically anyone at Fox News — Hey, some of these people already have “judge” in their names, so they’re perfectly qualified. How about Justice Hannity? Justice Carlson? Justice Current Blond on the Couch?

Nikki Haley—because if she’s on the Supreme Court, she can’t get in Ivanka’s way for the 2024 nomination. Of course, if Trump wins, he’ll make the nomination by decree, but it’s nice to have a backup plan.