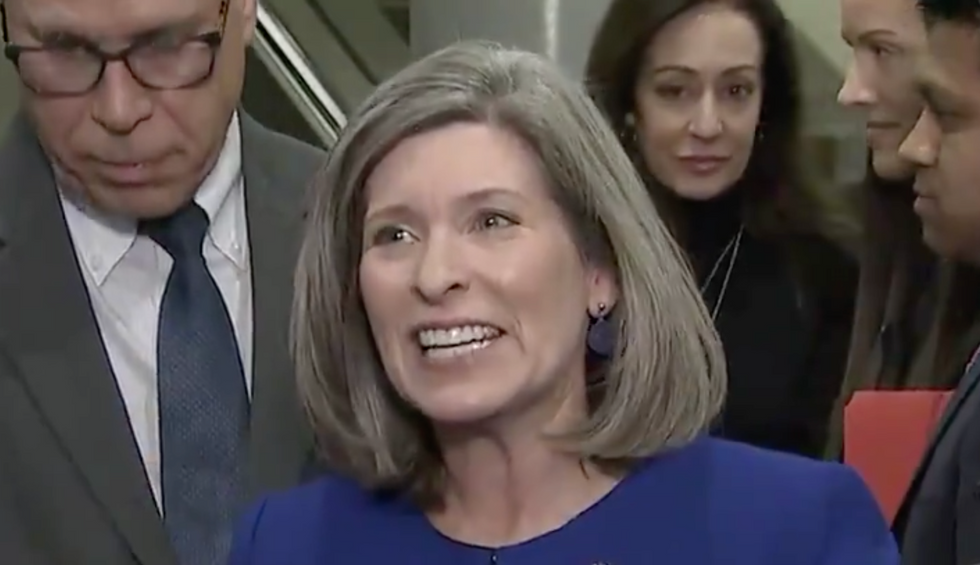 The far-right QAnon cult has been promoting a ludicrous conspiracy theory that the number of deaths being attributed to COVID-19 is greatly exaggerated. Republican Sen. Joni Ernst of Iowa was more than happy to echo that theory when, during a campaign stop in her state on August 31, she told an audience that she was “so skeptical” about the coronavirus death count being reported in the mainstream media — and Ernst, who is seeking reelection this year, is being slammed for her comments by her Democratic opponent, Theresa Greenfield, as well as epidemiologist Eric Feigl-Ding and other health and medical experts.

The Waterloo-Cedar Falls Courier reported that when a man at the campaign stop told Ernst he believed the coronavirus death numbers were being inflated, she agreed with him — responding that was “so skeptical” about those numbers. And Ernst went on to say, “These health-care providers and others are reimbursed at a higher rate if COVID is tied to it. So, what do you think they’re doing?” Ernst told the crowd that medical workers “do get reimbursed higher amounts if it’s a COVID-related illness or death.”

Ernst also said, “They’re thinking there may be 10,000 or less deaths that were actually singularly COVID-19.... I’m just really curious. It would be interesting to know that.”

The Iowa Republican, who was first elected to the U.S. Senate in 2014, didn’t actually mention QAnon at the campaign stop. And she didn’t go as far as QAnon, which is claiming that only 6% of the deaths being attributed to COVID-19 are actually coronavirus-related. But her claim that the COVID-19 death count is exaggerated is right out of the QAnon conspiracy playbook, and it didn’t take Greenfield long to lambast her opponent.

Greenfield tweeted, “It’s appalling for you to say you're ‘so skeptical’ of the toll this pandemic has on our families and communities across Iowa.”

It's appalling for you to say you're "so skeptical" of the toll this pandemic has on our families and communities a… https://t.co/5kdDCRhU0q
— Theresa Greenfield (@Theresa Greenfield) 1599009365.0

The “toll” that Greenfield mentioned is enormous. According to researchers at Johns Hopkins University in Baltimore, the COVID-19 death count in the United States had reached 184,697 on Wednesday morning, September 2. Worldwide, Hopkins reported a staggering 857,821 deaths from COVID-19. And while Ernst is “so skeptical” about those numbers, many medical experts believe that Hopkins’ figures undercount the number of coronavirus deaths. In the U.S. and many other countries, the COVID-19-related deaths being reported are typically deaths in hospitals. But when someone dies from COVID-19 at home, that death might be reported as something else — for example, “cardiac arrest.” Or if a diabetic dies from COVID-19 at home, that person’s death might be attributed to “complications from diabetes” rather than COVID-19.

Fact-checking Ernst on September 2, the Washington Post’s Katie Shepherd explained, “Her inaccurate figure of 10,000 or fewer COVID-19 deaths is similar to a widely spread QAnon meme that misinterpreted a recent study published by the Centers for Disease Control and Prevention. That study said the coronavirus was the only contributing factor in 6% of reported deaths. The conspiracy theory that claims the U.S. death toll is inflated incorrectly assumes that only 6% of deaths should be counted in the COVID-19 death tally. The study does not support that claim.”

The QAnon cult is known for its outrageous conspiracy theories. QAnon believes that an international ring of pedophiles and Satanists has infiltrated the U.S. government and that President Donald Trump was chosen to combat them — and that an anonymous figure named “Q” is providing updates on Trump’s battle.

Ernst is among the incumbent GOP senators who political strategists consider vulnerable in the 2020 election, and polls released this summer are showing a close race. Monmouth University, in early August, found Ernst ahead by 1%, although the Des Moines Register found her trailing Greenfield by 3%.