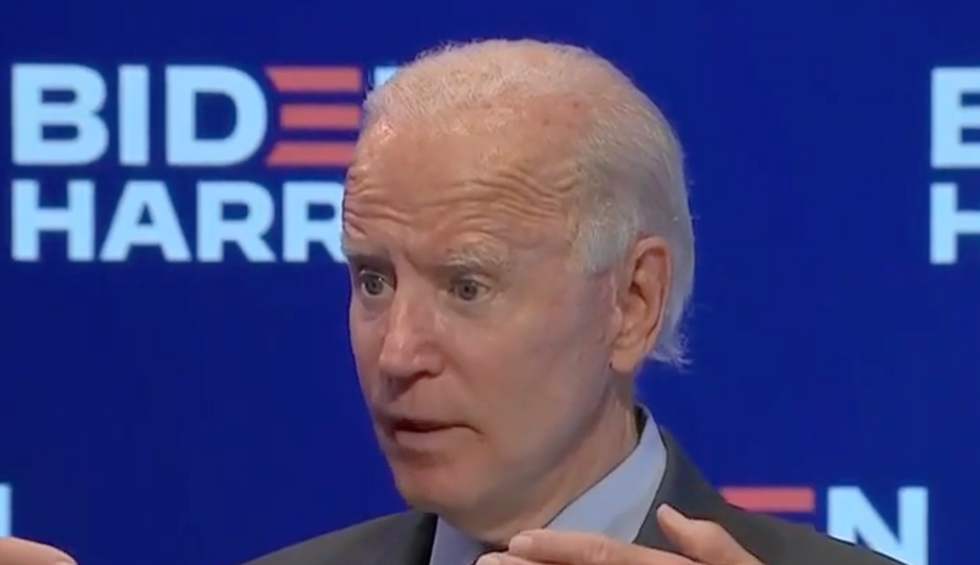 Joe Biden held a campaign event late Wednesday afternoon in Wilmington, Delaware. Addressing reporters, the Democratic presidential nominee spoke very eloquently on the true destructive nature of Trump’s politicization of our current public and economic health crisis, saying that the lack of “trust” in the current occupant of the White House was more than simply a political problem. Polls show that Trump’s anti-science agenda has led to people not trusting his “word” on anything scientific, and this lack of trust is affecting whether or not the American public can trust the scientific community we must rely on in order to successfully and safely navigate our way out of the COVID-19 pandemic.

The fact is the majority of Americans do not trust that any vaccine Trump touts without any verifiable evidence. This is in no small part because Trump has repeatedly attacked science and scientists, and has also been trying to treat the potential release of a vaccine like a gameshow. Of course, reporters at the event—in some general attempt to cast Biden’s statement in the most sweeping politicized light possible—asked whether or not Biden’s statement on Trump’s untrustworthiness was somehow counterproductive. Biden answered the question like a champion, and then was asked a second time in a different way and answered it again, dropping some truth bombs about science and Trump along the way.

BIDEN: They know he doesn’t have any respect for scientists. He basically said this. You saw what he said when he was out in California, about wildfires and “scientists don’t know” and “it’s going to go away like a miracle.” It’s necessary so people can trust the vaccine, and that’s why I said you have to have this board of scientists who are going to say “This is why with think this is a good vaccine,” and it has to be total transparency. So scientists outside the government know exactly what is being approved, the context in which it is being approved, and why it's being approved. That’s the only thing that takes care of that.

The reporter followed that up by conflating the American public being test guinea pigs with the phase 3 vaccination trials that Biden is saying need to be transparent and peer reviewed.

BIDEN: No, I'm not. I'm saying trust the scientists. Trust the scientists. It's one thing for Donald Trump to say the vaccine is safe. Okay, then give it to the board of scientists. Have total transparency—so independent operators, scientists, and companies can take a look at it. What did you base that decision on? What did you do? Did you pressure the head of the FDA? Did you pressure whomever? I'm not saying he won't or will. That's what has to happen. Because you know yourself. You know the polls better than I do. The American people right now don't trust what the president says about things relating to science.

Then the fake gotcha question from the reporter: “Would Biden take the vaccine if scientists verified its efficacy and safety?” Biden could have just said, “Duh!” Or he could have said: “Repeat back to me what I literally just said.” But because he isn’t a complete asshat like our current president, he reiterated the basic logic of his position, saying: “Absolutely, do it. Yes. If those three questions I laid out can be answered, yes, absolutely.”

The next reporter then asked if in saying Biden didn’t trust Donald Trump, he was also saying he didn’t trust the Food and Drug Administration (FDA) or the Centers for Disease Control and Prevention (CDC).

BIDEN: No. I don't trust some of the people, like the fella who took a leave of absence. He didn't run it. He was a spokesperson for it. When I met with the seven scientists today on the screen in this room, they told me the people they had worked with in the CDC and the FDA and all of the various agencies, [and] there's some very, very good people there in the ranks. The everyday folks, they’re not “everyday”—they’re scientists, but the people who do the daily work in there, there's some very, very good people. But you know from some [news] items that they've been quashed with things they have said. And they've been pressured. The heads of those agencies—politically appointed, some of them—have been in fact moved. Moved to say: “Yes, we can do this or that, this will work or that will work.” It's a simple proposition. If a vaccine is really [ready] to go, it should be totally transparent. The basis upon which that decision was made, what scientists have looked at, and said this is a useful, safe vaccine to take.

So that's all I'm saying that's going to be necessary. I respectfully suggest, no matter what I said in this process, all the polling data shows that only like 30-something percent of people say if Trump said it's okay—this is the same guy that said: “Inject bleach!” This is the same guy that said: “If you want to keep hurricanes from getting to the United States, why don't we drop a nuclear weapon on it?” You know, I mean, there’s a reason why they’re not so certain.

Yes. That is one of the million reasons.