How Ecuador's democracy is being suffocated 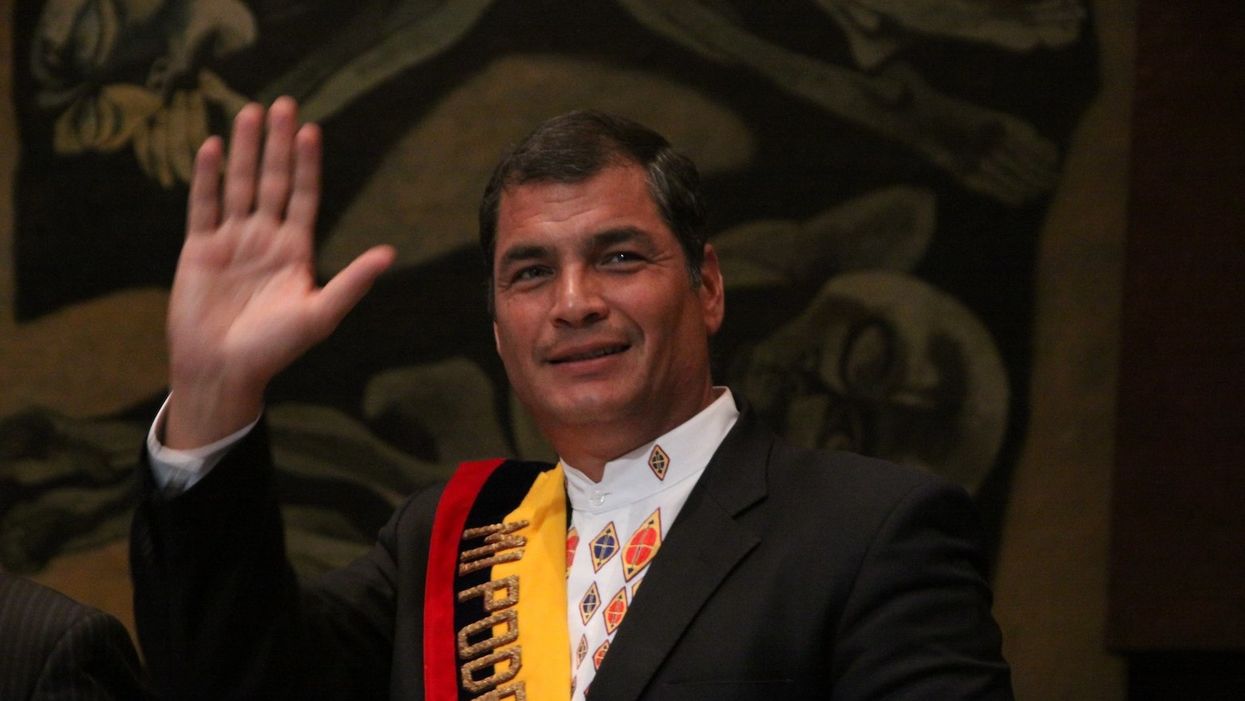 By Vijay Prashad and Pilar Troya

This article was produced by Globetrotter.

A recent poll showed that if Andrés Arauz Galarza were allowed to run in Ecuador's presidential election of 2021, he would win in the first round with 45.9 percent of the vote. The pollsters found that Arauz—who was the minister of knowledge and human talent from 2015 to 2017—wins across "all the social strata and regions of the country, with a slight weakness among the richest voters in the country."

Andrés Arauz entered policymaking and government when Rafael Correa was the president of the country, from 2007 to 2017. A stint at the Central Bank led to a career in the planning department (SENPLADES), before Arauz became a minister in the last two turbulent years of Correa's government. There was not a whiff of corruption or incompetence around Arauz in his decade of service; when Correa left office, Arauz went to Mexico to pursue a PhD at the National Autonomous University of Mexico (UNAM).

Those polled said that Arauz was by far the most attractive candidate. But, if the ruling bloc in Ecuador has its way, Arauz will not be sworn in as the next president of the country next year. They will use every means to suffocate democracy in their country.

The government of Rafael Correa, who is now living in Belgium, attempted to move a broadly left agenda while in office from 2007 to 2017. The Citizens' Revolution that Correa led passed a progressive constitution in 2008, which put the principle of good living (buen vivir in Spanish and sumak kawsay in Quechua) at its heart. Government investment to strengthen social and economic rights came alongside a crackdown on corporate (including multinational) corruption. Oil revenue was not parked in foreign banks, but used to invest in education, health care, roads, and other basic infrastructure. From Ecuador's population of 17 million, nearly 2 million people were lifted out of poverty in the Correa years.

Correa's government was anathema to the multinational firms—such as the U.S.-based oil company Chevron—and to the Ecuadorian oligarchy. Chevron's dangerous case for compensation against Ecuador, brought before Correa took office, was nonetheless fiercely resisted by Correa's government; the Dirty Hand (Mano Negra) campaign put enormous international pressure against Chevron. Chevron worked closely with the U.S. embassy in Quito and the U.S. government to undermine Correa and his campaign against the oil giant. Not only did they want him out, but they wanted the political tradition of the left—called Correistas by shorthand—out as well. Moreno, who was once close to Correa, switched sides and became the main instrument for the fragmentation of the Ecuadorian left.

In the election of 2017, Moreno defeated Guillermo Lasso, who is running again in 2021. But, within a short time, Moreno sharply moved rightward. He worked closely with Lasso in the National Assembly to undermine each advance made by the government of Correa. They defunded education and health care, withdrew labor rights and rights to housing, wanted to sell off Ecuador's refinery, and deregulated parts of the financial system. A consequence of these policies has been Ecuador's appalling response, including accusations of deliberate undercounting, to the COVID-19 pandemic.

Moreno and his right-wing allies needed to inoculate themselves from any criticism. They went on a frontal attack against the Correistas.

The first battleground was to fragment the Correista political organization and to deny the Correistas a political platform. A February 2018 referendum was barreled through the country that allowed the government to destroy the democratic structures of the Consejo Nacional Electoral (CNE), the Constitutional Court, the Supreme Court, the Judiciary Council, the attorney general, the comptroller general, and others. With the assistance of the CNE, Moreno divided and took control of Correa's party, the Alianza Pais.

When the Correistas tried to regroup and form a party, the institutions of the state blocked them. They said that the proposed names were misleading or that the signatures collected were invalid. By 2019, the Correistas used the Fuerza Compromiso Social platform to run for local elections in 2019. This platform was then banned in 2020.

In Brazil, the oligarchy prevented former president Lula from contesting the 2018 election; that process resulted in a new concept, lawfare—using the law as a political instrument. The same sort of lawfare was used in Ecuador to ensnare Correa and to prevent him from running for office. Correa was accused of bribery—with the bizarre notion of "psychic influence" (influjo psíquico) at the root of the case. The eight-year sentence inflicted upon him prevented him from running for office in Ecuador; that he was in Belgium meant that he could not, however, be arrested and imprisoned.

The CNE's president Diana Atamaint indicated that the CNE would disqualify Correa from the ballot, and even suggested that Arauz's candidacy is illegal as a consequence of having Correa as his running mate. Matters are at a stalemate, as lawyers scurry about trying to find a solution to this crisis. The CNE has until October 7 to fix the matter. The first round for the election is on February 7, 2021.

Vijay Prashad is an Indian historian, editor and journalist. He is a writing fellow and chief correspondent at Globetrotter. He is the chief editor of LeftWord Books and the director of Tricontinental: Institute for Social Research. He is a senior non-resident fellow at Chongyang Institute for Financial Studies, Renmin University of China. He has written more than 20 books, including The Darker Nations and The Poorer Nations. His latest book is Washington Bullets, with an introduction by Evo Morales Ayma.

Pilar Troya is a researcher at Tricontinental: Institute for Social Research. She is an Ecuadorian anthropologist interested in the feminist movement and social public policies, especially concerning gender equality. She served as a member of the board of Ecuador's former Women's National Council (CONAMU), an adviser to the Ministry of National Planning, and an adviser and deputy minister in the Ministry of Higher Education, Science, and Technology.