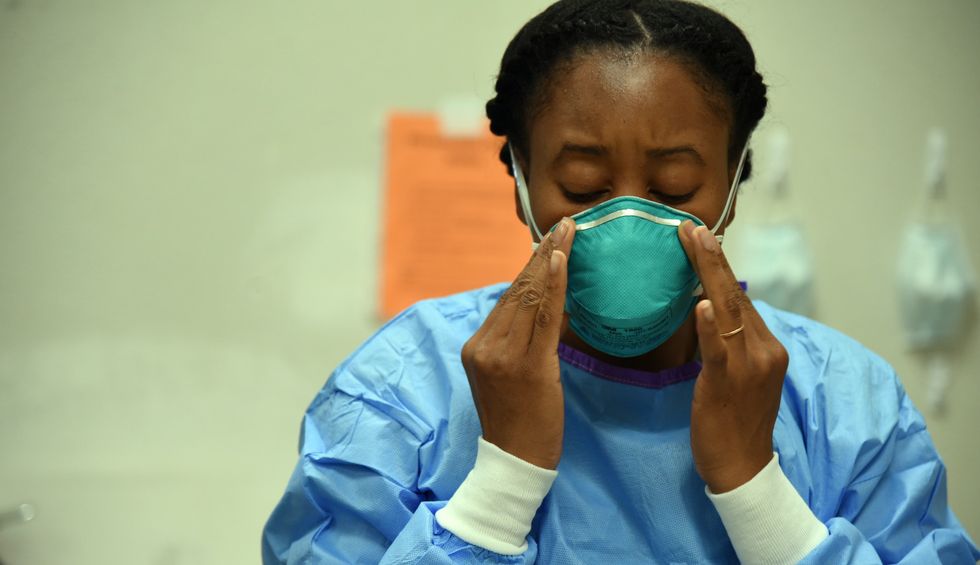 American Red Cross workers travel from one community to another conducting the blood drives that save countless lives in emergency departments and operating rooms.

But they struggle to perform that vital work while keeping themselves safe during the COVID-19 pandemic. Like many health care employers, the Red Cross fails to consistently follow social distancing and other coronavirus safety guidelines.

“Safety shouldn’t be only if it’s feasible,” observed United Steelworkers (USW) Local 254 President Darryl Ford, who represents hundreds of Red Cross workers in Georgia and Alabama. “It should be all the time.”

Eight months after COVID-19 hit America, the nation continues to fail the thousands of health care workers who put their lives on the line each day to help others survive the pandemic.

The Red Cross failed to provide face shields to protect Ford and his colleagues from blood spatter. And when a company that made the devices offered them for free, the Red Cross declined because of what it deemed the low quality.

“If it’s snowing outside and you don’t have a coat to give me, but you do have a sweater, give me the damn sweater,” fumed Ford, noting his members prefer some protection to none.

Employers’ shortsighted practices not only pose lethal risks to health care workers but ultimately will endanger the patients they serve, especially if a second wave of the virus strikes this winter.

Hospitals, nursing homes and other employers, for example, regularly work health care professionals to the bone despite the danger that understaffing poses both to workers and patients.

Across the country, tens of thousands of patients and workers died after contracting COVID-19 in nursing homes. And although employers had months to fill vacancies and resolve other problems affecting care during the pandemic, workers in these virus hotspots still face severe staffing shortages, lack of PPE or both.

“It’s challenging and it’s stressful,” explained Lynair Gardner, unit griever for USW Local 7898, which represents certified nursing assistants (CNAs), dietary and environmental services workers and other staff members at Prince George Healthcare Center in Georgetown, South Carolina. “But you’re there for people who can’t help themselves. Sometimes, you have to put that compassion first.”

CNAs at the facility took on extra responsibilities when the pandemic hit, such as distributing linens and cleaning up after meals to reduce residents’ contact with environmental services and dietary staff members.

Sometimes, Gardner said, she and her colleagues maintain such a grueling pace that they work through their scheduled breaks without even realizing it.

Instead of recognizing their sacrifices, however, the nursing home insists they work longer hours because of understaffing and give up the flexibility with shift scheduling they long had.

Gardner’s colleagues need to be protected from burnout. But they just as desperately want to be valued by a corporate employer that takes them for granted.

“Just show some respect,” Gardner said, “and treat the employees like you’re really thankful for us.”

Rather than fortify workers for the long fight against COVID-19 that remains ahead, employers flout coronavirus guidelines and retaliate against those who challenge safety lapses. And instead of using its power to safeguard the heroes on the front lines, the federal government helps facilities silence their voices.

Forced to share disposable gowns during the pandemic, three workers at a New York senior-living facility discussed the danger among themselves before one wrote a letter to management citing the infection risk that the requirement posed. The facility responded by firing them.

Donald Trump’s anti-worker National Labor Relations Board (NLRB)—acting through its general counsel, Peter Robb, who has pursued an agenda of undoing generations of cases favorable to workers—sided with the nursing home.

The NLRB dismissed the workers’ unfair labor practice charge after determining their efforts to safeguard their health failed to qualify as protected, concerted activity under federal labor law. The board strained to conclude there was no evidence of “group concern” in the workers’ actions. As a result of that case, health care workers across the country will be less likely to challenge safety risks even as the number of COVID-19 deaths continues to climb.

Since the pandemic began, the USW and other unions representing health care workers successfully forced many employers to adopt more stringent infection-control practices that protected staff and patients alike.

She also demanded better supplies for those cleaning the facility. When hospital managers tried to scale back the procedures for sanitizing rooms occupied by patients with infectious diseases, Anklam told them, “Then you go in there.”

The agency dismissed another unfair labor practice charge after the general counsel’s office determined that a concrete company could refuse to bargain with union members over sick leave and hazard pay because the parties were in the middle of a contract.

To the NLRB, it didn’t matter that the pandemic had drastically changed working conditions, exposed workers to new risks requiring contract adjustments or created the need for their union to bargain about rights and benefits that couldn’t have been imagined months earlier. The decision potentially means employers in many industries, including health care, will refuse to bargain with workers on critical issues, such as COVID-19 safety practices, while contracts remain in place.

Anklam fears hospitals and nursing homes now will say, “It’s our way or no way,” when unions demand changes to protect staff and patients.

Already, far too many health care employers ignore workers’ concerns while exploiting their professionalism and compassion to keep them on the job.

Ford and his co-workers, for example, take great pride in collecting the blood that not only makes life-saving transfusions available virtually everywhere but also helps to advance research into public health dangers, like COVID-19.

He just wishes the wave of support Americans showed for health care workers at the beginning of the pandemic lasted as long as the health crisis itself and forced employers to make real, permanent changes in worksite safety.

“It’s back to business as usual,” Ford said.

Tom Conway is the international president of the United Steelworkers Union (USW).>This article was produced by the Independent Media Institute.