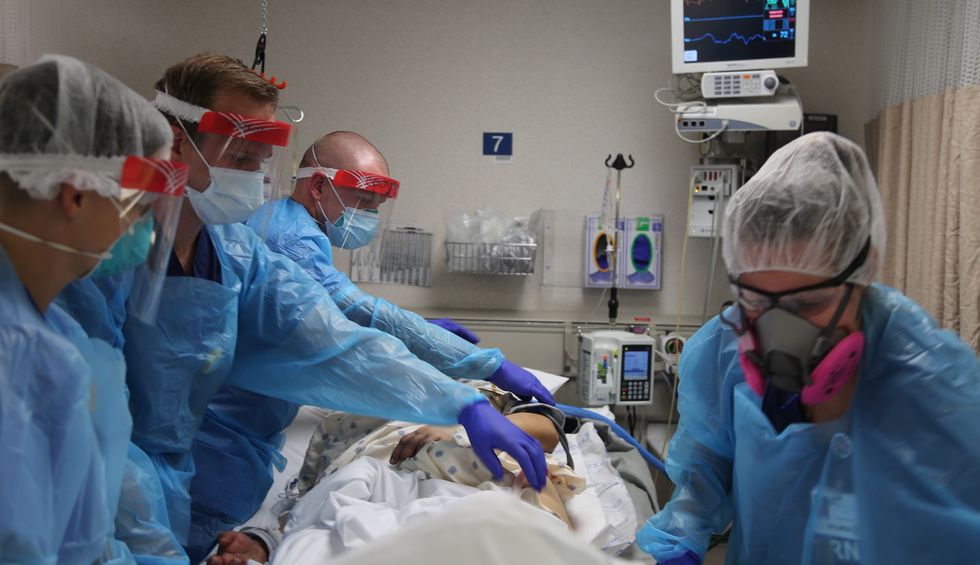 Last week’s revelation that Donald Trump – a man who invented a medical condition to escape military service – had called Americans who died for our country “losers” and “suckers” seemed like a flaming political disaster. Now comes a series of recordings that confirm that Trump knew how deadly and contagious Covid was but intentionally downplayed the danger while opposing steps that would have helped bring the virus under control. Twice in one week, Democrats have held their breath and once again thought that, maybe, just maybe, this time Donald Trump had finally crossed a fatal line.

The two issues are superficially similar. Each confirms something terrible that the public already knew or suspected about the president. But the Covid news is different in three key ways that combine to give it real punch.

First, the revelation is on tape. As we’ve seen in previous political storms, that can make a difference. The most famous recent instance was perhaps Mitt Romney’s declaration that “47 percent of the people…are dependent upon government [and that he could] never convince them they should take personal responsibility and care for their lives.” But there are many other examples, from then-Senate Majority Leader Tom Daschle’s statement that he was a DC resident to Virginia Governor George Allen’s “Macaca moment” to then-candidate Barack Obama’s “cling to guns or religion” stumble.

In each instance, the tape was critical. It drove a story about the candidate on its own with very little added commentary needed, and one that fit into a framework that was believable to the public. Voters are used to opposing campaigns trying to drive a negative narrative about the other side, and they have become somewhat inured to attack ads. Tapes add essential credibility and punch, which is why “trying to catch a candidate” in their own words has become the gold standard of effective campaign messaging according to Democratic strategist Doug Thornell.

Of course, having the goods on tape does not always guarantee that an issue will have political bite. As my colleague Joshua Holland points out, in 2016 Trump’s favorability remained unchanged in the 10 days after the “Access Hollywood” tape emerged. And the opposite can also be true: not being on tape does not make it safe to say bad things. Hillary Clinton’s “basket of deplorables” remarks were reported as a transcript, but still resonated.

That is where the second factor comes in: it makes a big difference that “losers and suckers” was ultimately about Trump, and Covid is ultimately about all of us. As Holland argues, by the time Trump was bragging on audio about his ability to do anything he wanted to women, people were well aware of his awful (and even criminal) behavior. That behavior certainly affected many people in horrible ways, but the story was ultimately about Trump’s personal conduct and morality, not about how he would approach all women (as much as Democrats tried to claim – correctly as it turned out – that his behavior indicated how he would act on policies that affect women). Trump’s comments about the military fall into the same category: insulting the sacrifice of fallen soldiers essentially confirms that Trump is a horrible human being. And by now, that is what journalists call a “dog bites man” story.

By contrast, Covid is having a disastrous impact across the whole of American society. It is about us, not him. His actions have had real consequences in terms of death and suffering. The other significant “on tape” moments cited above also targeted large swaths of Americans: 47 percent in the Romney comment, almost two-thirds of Americans in Obama’s, half of Trump’s supporters in the case of Clinton.

Finally, there is the third difference: the Covid news turns the focus of the campaign from a completely polarizing issue to relatively stronger territory for Democrats that unifies both progressives and moderates, and therefore from favorable ground for Trump to favorable ground for Biden.

In recent weeks, there has been exhaustive media punditry about whether the Trump strategy of focusing on violent protests was working. Some, like George Packer in the Atlantic, claim that the issue was inflicting a potentially fatal wound on the Biden campaign. Others, like Geoffrey Skelley at FiveThirtyEight, assert that the lack of significant movement in polls and voters’ preference for Biden’s approach to both public safety and race relations shows that the issue is not resonating with voters beyond Trump’s dedicated base.

Neither perspective is quite right. The Trump campaign does not expect the focus on protests to be fatal or to change the mind of lots of voters. The point of the Trump strategy is to focus voter attention onto an issue that is polarizing. Polling finds that Americans are now evenly split on whether recent protests are “mostly violent” or “mostly peaceful” (down from a majority seeing them as peaceful earlier this summer) with more than two-thirds of Democrats seeing mostly peace while two-thirds of Republicans perceive mostly violence. (A recent analysis of protests since the murder of George Floyd found that 93 percent of them had been peaceful.) That is a potentially helpful pattern for Trump. We have seen similar polling effects recently: the Brett Kavanaugh confirmation drove very similar proportions of Republicans and Democrats to opposite sides, and was likely a significant factor in helping Republicans hold on to the Senate in 2018.

That is the essence of the Trump strategy. The fact that his national approval rating has been stuck in a narrow band ranging from 40 percent to 44 percent for most of the past four years shows that voter impressions of him have largely settled. He is unlikely to make significant inroads with swing voters at this stage of the game. His best chance, perhaps his only chance, is to “bring Republicans back home,” which is a natural effect down the stretch of a campaign and why 14 of the past 16 presidential races have tightened in the final weeks.

An issue like violence at protests is not intended to appeal to swing voters. It is intended to raise the profile of an issue that sends people back to their partisan corners, drawing a sharper dividing line between the parties and forcing Republicans to make a starker choice. Trump is betting that when faced with that choice, the Democratic alternative will seem to be too far across the partisan chasm, and he will thereby be able to eke out enough Republican votes to stay competitive in swing states and pull off another paper-thin win as he did in 2016.

But now, with 54 days before November 3, the focus is back on an issue that is much better for Biden: the pandemic is more salient to voters and it brings together independents and strongly partisan Democrats. It is of course true that all issues are polarized for strong partisans these days – and Trump’s Covid response is no exception. But voters see Covid as a much more important concern than crime and violence, and all but partisan Republicans disapprove of Trump’s response. It is not an issue where Republicans see a stark choice and will rally to defend the President’s approach.

None of these three factors on its own would make the Covid news a game changer. In combination, having an issue on tape that impacts the majority of Americans’ lives and moves the focus away from a polarizing wedge issue gives Democrats a real chance to grab the momentum back.