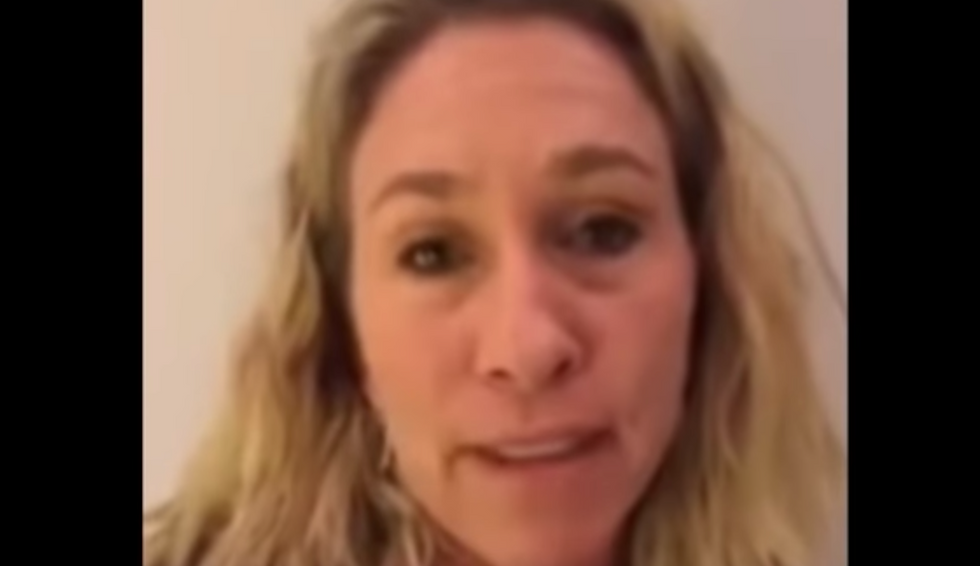 One of the summer’s biggest political shockers came when QAnon extremist Marjorie Taylor Greene won a GOP congressional primary in Georgia. Considering how overwhelmingly Republican her district is, she is likely to win the general election and be sworn into the U.S. House of Representatives in January — and Greene, who has a history of racist, anti-Semitic and Islamophobic remarks, now appears to be directing threatening congresswomen of color she is likely to be colleagues with next year.

On her Facebook page, Greene posted an image of herself holding a gun alongside images of three Democratic progressives —  Rep. Alexandria Ocasio-Cortez of New York City, Rep. Rashida Tlaib of Michigan and Rep. Ilhan Omar of Minnesota — and wrote: “We need strong conservative Christians to go on the offense against these socialists who want to rip our country apart.”

Omar tweeted, “Posting a photo with an assault rifle next to the faces of three women of color is not advertising. It’s incitement. There are already death threats in response to this post. Facebook should remove this violent provocation.”

Posting a photo with an assault rifle next to the faces of three women of color is not advertising. It’s incitement… https://t.co/CCxzI8EsmO
— Ilhan Omar (@Ilhan Omar) 1599229942.0

In a different Facebook post attacking those congresswomen, Greene wrote, “Hate America leftists want to take this country down. Politicians have failed this country. I’m tired of seeing weak, establishment Republicans play defense. Our country is on the line. America needs fighters who speak the truth."

Given Greene’s willingness to promote the unhinged QAnon conspiracy cult, Omar is right to be concerned. QAnon believes that an international ring of pedophiles and Satanists has infiltrated the United States’ federal government and that President Donald Trump was chosen to combat the ring. The “Q” is a reference to an anonymous figure who supporters of the cult believe is giving them updates on Trump’s battle. And the FBI has linked QAnon to acts of violence.”

Ocasio-Cortez, Tlaib and Omar, along with Rep. Ayanna Pressley of Massachusetts, comprise the four congresswomen of color who are known as The Squad in the House. All of them were elected during the huge blue wave in the 2018 midterms that gave Democrats control of the House.