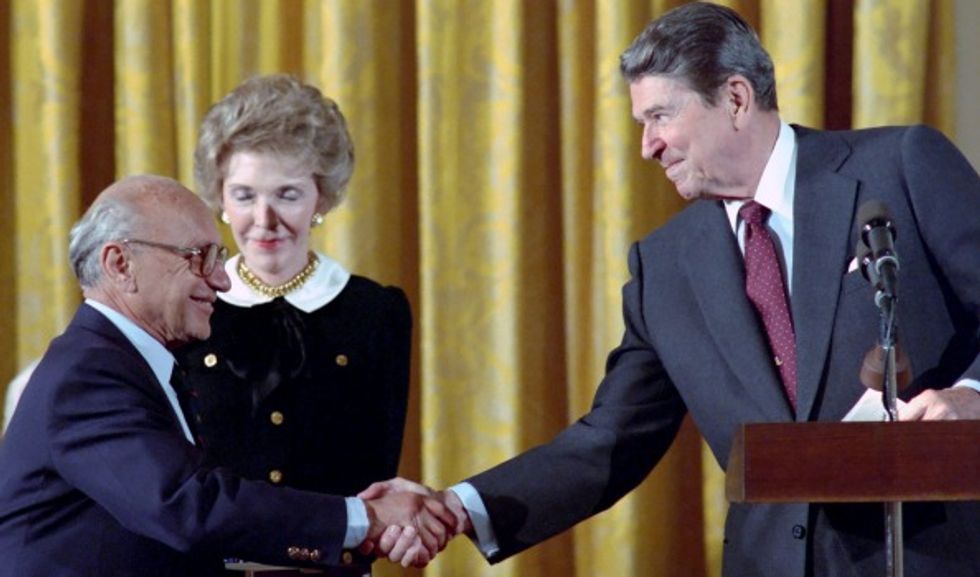 Economist Milton Friedman, who was 94 when he died in 2006, was a major influence on Reaganomics, neoliberalism and trickle-down economics — and everyone from the Libertarian Party to Ronald Reagan’s administration has embraced his views on business and the economy. Friedman, however, has been widely criticized by liberals, progressives and proponents of New Deal and Great Society economics, and former GOP insider Bruce Bartlett lays out some reasons why Friedman’s influence on U.S. economic policy has been harmful in an article published in The New Republican this week.

Bartlett himself was a longtime Republican who worked under Presidents Ronald Reagan and George W. Bush — but he broke with the part under the second Bush's presidency. The GOP has long revered Friedman as a paragon of economic thought, but Bartlett argues this view is a mistake.

Friedman was known for what has been called “shareholder economics” or “the shareholder theory.” In essence, Friedman disagreed that corporations had an obligation to society on the whole — their only obligation, he argued, was to their shareholders.

“Friedman’s ideas about monetary policy have long created negative economic consequences,” Bartlett explains. “And now, more than 40 years after the monetarist recession that former Fed chief Paul Volcker engineered under the influence of Friedman’s theories, Jay Powell’s Federal Reserve is trying to break free from them.”

The worst economic downturn of the last century came when the Great Depression started in 1929. Friedman, Bartlett notes, saw the Depression “as primarily a failure of the Federal Reserve.”

According to Bartlett, “By the time the Depression hit, Friedman contended, the Fed had allowed the money supply to shrink by about a third, which brought on a deflation that caused the price level to drop by about 25%. …. But Friedman’s account glossed over why the money collapsed. When banks failed in those days, their deposits simply disappeared: there was no deposit insurance, and the bulk of the money supply consisted of bank deposits, not cash. The Fed lacked the legal authority to buy banks and keep them solvent, which is the only thing that would have helped.”

Barlett elaborates on why Friedman’s views on the causes of the Great Depression were flawed.

“The only thing the Fed can really do to counteract a downturn is buy Treasury securities on the open market using newly created money,” Bartlett explains. “But if the banking system is basically frozen, as it was in the early 1930s, there is no transmission system to get money circulating. So, in the great tradition of academic economics, Friedman just assumed away this problem, insisting that the Fed could have prevented the Depression simply by aggressively buying Treasury securities and flooding the economy with money.”

Friedman was highly critical of economist John Maynard Keynes, who has often been quoted by liberal economist and New York Times columnist Paul Krugman. Barlett points out that Keynes believed that in a “deflationary depression” like the one President Franklin Delano Roosevelt inherited when he took office in 1933, “government was the only entity capable of increasing aggregate spending.”

Barlett wraps up his article by stressing, in essence, that what the Fed needs today is more Keynes influence and less Friedman influence.

“When the Fed first began its efforts to stimulate the economy by dropping interest rates and increasing the money supply in 2008,” Bartlett writes, “conservatives condemned the move, saying rampant inflation would soon result. Although there has been no sign of inflation in all the years since, they are making the same argument today…. The day may come when the Fed must tighten monetary policy to keep inflation in check. But in the past, its preemptive strikes against it by tightening prematurely have nearly aborted the economic expansion it was seeking to spur.”