Anti-masker throws a South Dakota school board meeting into chaos 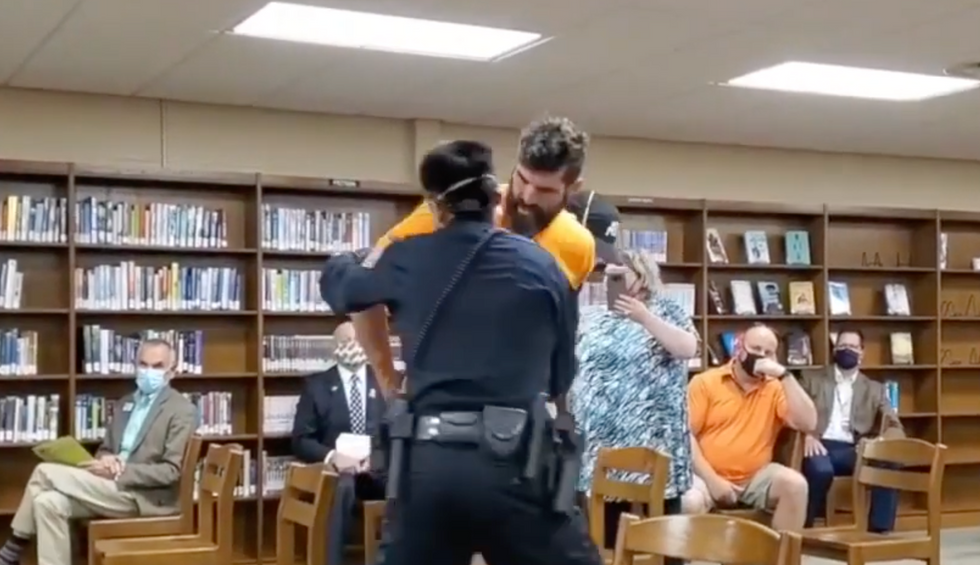 One of the greatest issues with our country’s public health policy right now is how splintered and erratic the information being disseminated is. The lack of federal consistency in guidance and financial support, along with the intense politicization of the COVID-19 pandemic by Donald Trump and Sen. Mitch McConnell, has led to incredibly inconsistent applications of public health mandates and suggestions. It has also pitted public health policies and mandates up against the frequently amorphous political understandings of civil liberties.

One such place facing issues like this is South Dakota, where a video recently went viral that shows a very large man, Reed Bender, being escorted out of a school board meeting by two police officers for refusing to wear a mask. Bender, a white man, is the only person not wearing a mask (though there is also an angry woman with her mask around her chin like a true silly billy). According to reports, masks were available for people who did not have them. Unsurprisingly, Bender doesn’t get the violent treatment that he would get if, say, he were a Black child being handcuffed at school for throwing a tantrum.

According to the Duluth News Tribune, Mr. Bender, who has two children in the Mitchell School District, has spoken out against masks mandates in previous meetings. The president of the board of education, Deb Olson, had announced the mask mandates at the beginning of previous meetings and had also explained that anyone who was “unable medically to wear a mask” should make prior arrangements with the school to figure out how best to go about this. Reed did not fall into this category. However, when he arrived at the meeting on Monday, he sat in the front without a mask and Mitchell School Superintendent Joe Graves was forced to contact the Mitchell Police Division to have Bender removed. Graves told reporters: “Never in my entire career as a superintendent have I had that happen before.”

The police officer explains very calmly and quietly to Mr. Bender that a face mask is required for this school board meeting, to which Bender replies the police will have to “drag” him out. The officer—who is wearing a mask—makes the oh c’mon man face before telling him: “Sir, I really don’t want to—“ at which point Bender cuts him off, louder now, to reply: “I know you don’t want to do it … but unfortunately you have to follow this fool’s rules, right?” The “fool” in this case might be the school superintendent or whomever has mandated public health steps be taken in a meeting during a goddamn pandemic.

Bender, at this point, says something about how he’s being forced out. He isn’t, of course, he just has to wear a mask to protect the other people around him. He remarks that people mandating masks are “sowing discord in our communities,” a phrase that means something in some context. He addresses a possible business owner off-screen to ask whether or not he “harasses” his customers at a restaurant to wear a mask. Of course, the idea of freedom of speech, of taxes, for someone like Bender is that he believes the motto “the customer is always right” should be applicable to public health decisions by elected officials.

It isn’t because that would be sort of like allowing my 8-year-old to be the safety inspector on a building site. I love my child, but he isn’t a safety inspector and I doubt he would always be right about a building’s structural integrity.

From here, after a little bit of almost theatrical scuffling with other parents telling Mr. Bender not to resist—“it’s not worth it, brother”—Bender tells one of the police officers: “You will have to tase me in front of all these people.” The officer, who has the Taser out, responds: “I really don’t want to tase you.”

It’s here that Mr. Bender gets a teensie-weensie bit racial as the police officer holding the taser, who is considerably smaller than Bender, is not white. Bender says: “I want these people to video it, while their cops, of minority descent, have to do this to everybody. Constantly putting you people in these positions.” To be generous here, one might read this quote as a general one about how people in power use people of color to do the front-line dirty work of the state. It’s a garbled and unformed idea here for sure, but it did not seem like a slam on the officer’s racial makeup.

Bender is finally taken out of the board meeting. The aforementioned woman with her mask under her chin has been filming this interaction and showing a lot of verbal support for Bender and his plight. When he is finally out of the room she turns to the school board to chastise everyone on Reed’s behalf, saying that “this is an embarrassment and you should all be embarrassed.” She goes on to point out some of the very real inconsistencies being seen in the school’s policy, as high school football players seem to be allowed to huddle up and not wear masks while the rest of the student body’s activities are curtailed by mask mandates.

This is a very good point. Of course, this is the paradox that school systems everywhere find themselves in as parents want their kids back in school, or in something resembling our lives before the pandemic. She’s not alone; there are others who said they thought Bender was far enough away from others to be safe.*

The News Tribune reports that after Bender was escorted out, the subject of the mask mandate came up repeatedly, with parents asking why they were not consulted on the mask policy before the school reopened. Specifically, some parents wanted there to be a survey sent home for their opinions on the matter. But board of education member Kevin Kenkel explained that parents don’t get to make public health policy and school health policy based on their feelings:

“A survey wouldn’t change my mind, the medical professionals have recommended (masks), and my wife cares for and has treated several patients who have had COVID-19. She has seen the long term effects on people. Even if 75% said we don’t want masks, I would still vote in favor of masks,” Kenkel said.

Bender’s wife reportedly wrote a piece of support for her husband on Facebook. The Daily Mail published a screenshot of her post where she explained that she does “feel” everyone’s side on the matter. That her mother and many of her friends are Democrats and other friends of hers are Republicans, and she makes a point that there are “maskers” and “non-maskers” (she puts quotations around those terms) who are Republican and who are Democratic.

Bender was not charged, and no one was hurt.