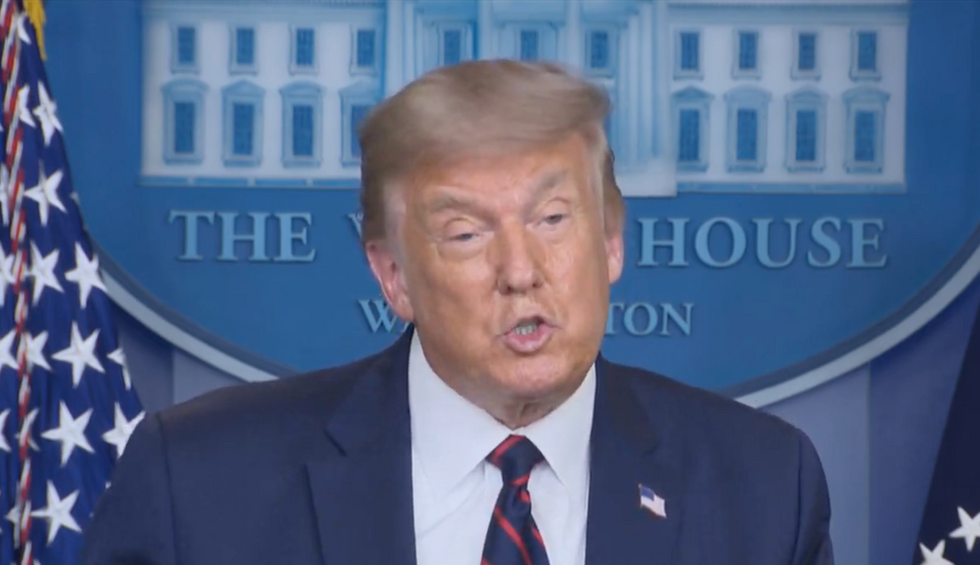 Impeached Oval Office squatter Donald Trump apparently had his chief of staff Mark Meadows, formerly the leader of the maniacs in the Freedom Caucus, blow up the negotiations with Democratic leaders to save the nation from coronavirus so Trump could sweep in with "executive orders" to save the day. Except that three out of four of the orders are actually memorandums, and none of them are actually constitutionally within his power to enact. So, yeah, illegal. And not at all helpful for people whose lives have been upended by the crisis. There's no eviction moratorium, he would cut unemployment benefits by $800 in a month, it steals from FEMA (at the start of an active hurricane season), and would top it all off by starving Social Security.

This hasn't been received well by anybody but the millionaires he announced it to at his luxury golf club last Friday. The New York Times reports it "resulted in confusion and uncertainty on Sunday for tens of millions of unemployed Americans and countless businesses seeking aid after critical benefits lapsed." The Washington Post concurred, reporting that it "sparked confusion and frustration on Sunday among businesses, Democrats and state officials, some of whom lamented the moves would not deliver the necessary relief to cash-strapped Americans." The bad press could be why Trump insisted Sunday that "The Democrats have called. They’d like to get together." They haven't called. He tweeted it again on Monday, "So now Schumer and Pelosi want to meet to make a deal. Amazing how it all works, isn’t it." But it's still not true.

The move Trump made on unemployment is perhaps the biggest slap in the face to American workers out of jobs. The lowest paid workers will get nothing because the pretend program from Trump limits the supplemental money to people receiving more than $100/week in regular state unemployment. The self-employed, people relying on tips, and gig workers wouldn't see any of the benefit. It's also unworkable for states, which are supposed to come up with 25% of the reduced $400/week payments, and can't afford it. If states can't come up with money, Mnuchin said on Fox News Sunday, the administration might waive that requirement. Which means that people formerly getting the $600/week would get even less, just $300. There's $44 billion for that that Trump proposes stealing from FEMA's disaster relief reserves. It would cover less than five weeks of unemployment insurance payments to the 30-plus million out-of-work Americans. Five weeks—that is, if states could even get it up and running. Some states didn't get the last enhanced UI program, from the CARES Act in March, fully implemented until as late as July.

Likewise, Trump's big obsession—ending payroll taxes and cutting off the Social Security and Medicare funding stream—wouldn't really help people, and certainly not the millions who aren't on any payroll right now. What Trump would do (but legally can't since he's not the one who writes tax law) is defer payroll taxes from September 1 until the end of the year, with a promise that he would "terminate" payroll taxes (and presumably Social Security) if he was reelected. But that leaves businesses in limbo.

As it stands, they'd have to claw back that money to employees at the beginning of next year. “I think what most employers are going to do is not pass this on to their employees,”  Josh Bivens, the director of research at the left-leaning Economic Policy Institute, told the Post. “They’re not going to give money to the worker because the government is at some point going to come back for it.” All that Trump achieved with that part of the orders was declaring that he intends to destroy Social Security, which Democratic presumptive nominee Joe Biden was quick to point out on Sunday, saying Trump is trying to “undermine the entire financial footing of Social Security,” and to put Americans’ benefits “in doubt.”

He didn't even do the only thing that was in his actual power—extend the moratorium on evictions in federally mortgaged housing units. It expired last month and would have been simple to reimpose. Instead, Trump calls on the Department of Health and Human Services along with the Centers for Disease Control to “consider” temporarily halting evictions and to determine whether there's federal money available for providing rental assistance. That's not enough to keep people in their homes.

Pelosi and Schumer haven't been desperately trying to get Trump on the phone, but they haven't been silent. “These policy announcements provide little real help to families," they wrote in a joint statement Saturday. "For instance, not only does the President’s announcement not actually extend the eviction moratorium, it provides no assistance to help pay the rent, which will only leave desperate families to watch their debt pile higher. Instead of passing a bill, now President Trump is cutting families’ unemployment benefits and pushing states further into budget crises, forcing them to make devastating cuts to life-or-death services.

Trump's memos "do nothing to increase testing, nothing to reopen schools, nothing to put food on the table for hungry families, nothing to prevent heroes being laid off across state and local government, nothing to protect the Postal Service or the integrity of our elections, nothing on many critical needs of the American people," they wrote.