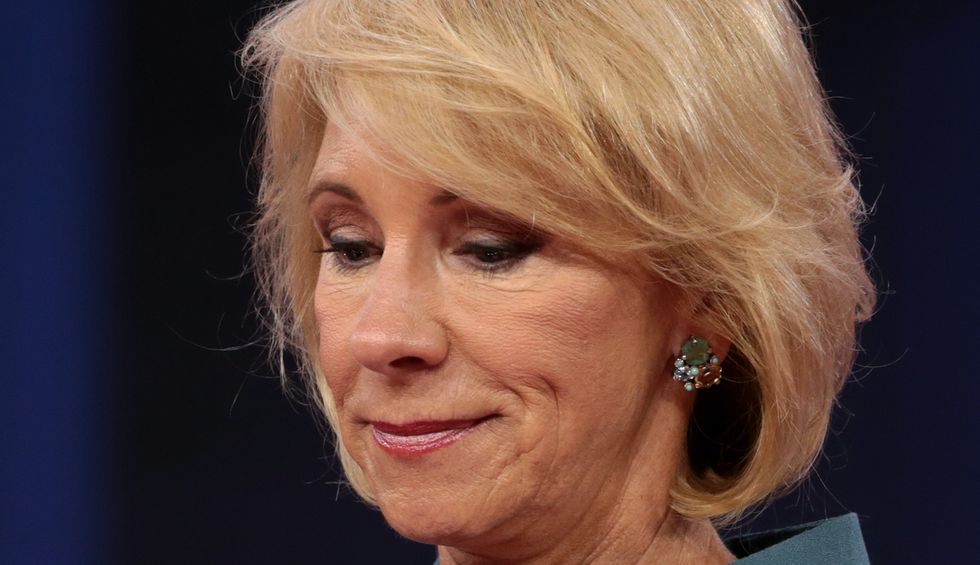 Education Sec. Betsy DeVos has spent her life—and lots of her family’s money—pushing to destroy public education. And now the coronavirus pandemic is giving the Trump administration a tool to do just that, but DeVos is being all but erased from the public effort.

There’s a reason for that: DeVos has been unpopular from her Senate confirmation hearing on. As people struggle with school reopening plans that are confusing, inadequate, unsafe, or all of the above, it might be counterproductive to remind them that the Trump administration’s proposed answers are in fact part of the same war against public education DeVos has been waging for a long time.

“School choice,” or, in translation, funneling public money away from public schools and into private schools and privately run charter schools that don’t have to follow the same rules as public schools, was a centerpiece of the Republican National Convention (RNC). Donald Trump talked about it—lying about Democratic nominee Joe Biden’s position on charter schools—as did Melania and Don Jr., among other speakers.

But while “school choice” was everywhere at the RNC, DeVos was entirely absent, not even included in a video about women in the Trump administration. That’s a decision. Not “we didn’t have time to include her as a convention speaker” but an intentional omission of one of the highest-ranking women in the administration.

DeVos may be a particularly unappealing messenger with her yachts and mansions and fumbling about “potential grizzlies.” But it’s also worth thinking about how much Team Trump is trying to use the pandemic as a stealth attack, separating DeVos’ relatively unpopular longtime efforts against public schools from the push to replace public schools with privatized options in this specific pandemic moment. The coronavirus is a chance to rebrand school privatization away from Betsy DeVos, presenting it as an answer to a specific problem now.

That two-pronged attack—the longstanding one built on DeVos’ money and the current one masquerading as a solution to a new problem—is powerful. This is an existential crisis for public education. But don’t mistake the idea that privatized education is the answer to the coronavirus crisis for anything but the same old assault on the public good of an education system that serves all kids.