Trump and white evangelical Christians are bonded by sadism 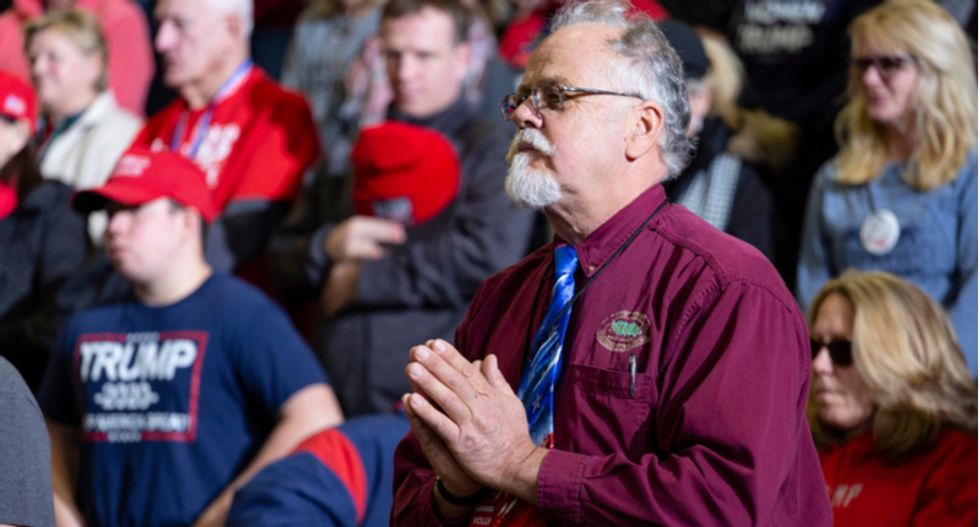 There’s still too much confusion over the president’s bond with white evangelical Protestants (WEPs). I suppose there will always be as long as outsiders presume that Donald Trump’s strongest supporters believe in loving thy neighbor as thyself. Once you see that WEPs do not apply the Golden Rule universally and unconditionally, things become clearer. Once this Christian concept is removed from the discussion, “paradoxes” melt into the air. What’s left is a natural alignment of political interests.

How do I know WEPs don’t truly believe in the Golden Rule? From life experience. I know what I’m talking about. All you have to do is listen carefully, however, and know what to listen for. Elizabeth Dias wrote a big piece in the Times last week trying to clear up the “contradiction” of WEPs standing by Trump “when he shut out Muslim refugees. When he separated children from their parents at the border. When he issued brash insults over social media. When he uttered falsehoods as if they were true. When he was impeached.” A source explains helpfully that there’s no contradiction at all.

“The years of the Obama presidency were confusing to her,” Dias wrote of her source. “She said she heard talk of giving freedoms to gay people and members of minority groups. But to her it felt like her freedoms were being taken away. And that she was turning into the minority.” The source: “I do not love Trump. I think Trump is good for America as a country. I think Trump is going to restore our freedoms, where we spent eight years, if not more, with our freedoms slowly being taken away under the guise of giving freedoms to all. Caucasian-Americans are becoming a minority. Rapidly.”

This makes no sense to outsiders. Freedom for “gay people and members of minority groups” is not taking anything away from anybody. This makes no sense, because outsiders do not generally accept a worldview in which power is ordered. First God, then man, then woman, then child. White over nonwhite. Heterosexual over LGBTQ. Christian over non-Christian. When you believe with your whole being that power is ordered according to God’s will, “giving freedoms to gay people and members of minority groups” is not political equality, as outsiders would often see it. It’s knocking you out of the order of power. It’s taking something away. Equality is literally theft

When political equality is theft, you cannot apply the Golden Rule universally and unconditionally. If you did, you’d be complicit in a crime. The Golden Rule demands white people share power with nonwhite people. It demands husbands share power with their wives. Neither can ever be done. A wife, according to the same source in Dias’ reporting, must “submit” to her husband in accordance with God’s law. If she does not, she’s trying “to rule over him.” Same for whites and nonwhites. If white people are not at the top of the order, they are being ruled over. This is why Dias’ source says that, “Caucasian-Americans are becoming a minority. Rapidly.” The more for “them,” the less for “us.” They believe Trump prevents that from happening.

They believe Trump is “restoring their freedom.” Utter nonsense. What they are really saying is that the president will prevent people lower down the order of power from achieving more freedom and equality, “violating” their “freedom.” He must do that by any means, even if he confiscates kids from their mothers, bans a world religion, or commits treason. None of that matters as much as maintaining the supremacy of a religious identity built on sand. And make no mistake: this is a religious identity. These are very real anti-democratic Christians hostile to critical thinking, modernity, pluralism, and all forms of equality. “It’s almost like it is a reverse intolerance,” a WEP source told Dias. “If you have somebody that’s maybe on the liberal side, they say that we are intolerant of them. But it is inverse intolerant if we can’t live out our faith.”

If WEPs believed in the Golden Rule, they’d never tolerate other people’s pain. They do tolerate it, however. Indeed, they like it. It feels good to see the president “restoring their freedom.” When WEPs say they want to “live out our faith,” what they mean is sadism is and should be a natural consequence of the natural order of things in which God’s people are chosen to rule in God’s name. “Evangelicals did not support Mr. Trump in spite of who he is,” Dias wrote. “They supported him because of who he is, and because of who they are.” That’s correct, but take that to its logical conclusion. His enemies are their enemies. His pleasures, their pleasures. Their bond is far from a contradiction. It’s an alignment of political interests in which sadism is the point.