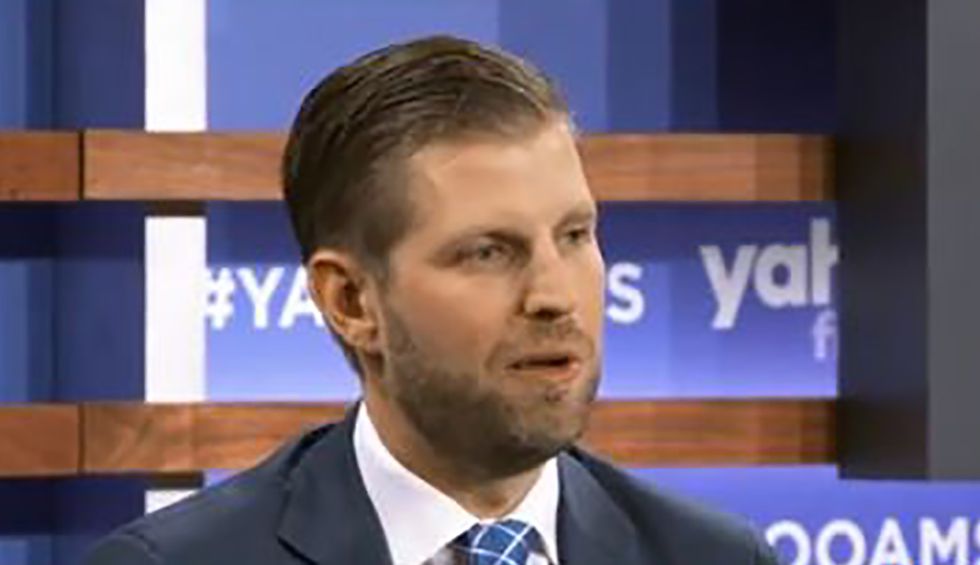 When Democrat Letitia James was running for attorney general of New York State in 2018, she promised that if elected, her office would conduct aggressive investigations of President Donald Trump and his company, the Trump Organization. Since her victory in that election, James has made good on her promise — and that includes an investigation of some Trump properties. According to New York Times reporters William K. Rashbaum and Danny Hakim in a new artilcoe on Monday, James has demanded documents on those properties and has asked a judge to order Eric Trump to testify.

The four properties that James’ office is taking a look at are the Trump International Hotel and Tower in Chicago, 40 Wall Street in Lower Manhattan, the Trump National Golf Club, Los Angeles, and the Seven Springs estate in Westchester County, New York. Rashbaum and Hakim note that James “started the civil inquiry in March 2019 after President Trump’s former personal lawyer, Michael D. Cohen, told Congress that the president had inflated his assets in financial statements to banks when he was seeking loans and had understated them to reduce his real estate taxes.”

In addition to seeking testimony from Eric Trump — the president’s son and executive vice president of the Trump Organization — James’ office has asked a judge to order two Trump attorneys to submit to interviews under oath. One of them, according to Rashbaum and Hakim, is Charles Martabano, a lawyer for the Trump Organization. And the other is Sheri A. Dillon, who has represented the president and his company on tax-related matters. Dillon works for Morgan, Lewis & Bockius, a major law firm with headquarters in Philadelphia and offices in many other cities.

James’ probe of these Trump properties is a civil investigation, not a criminal investigation. But Rashbaum and Hakim note that if her office found any evidence of criminal activity, it could either “refer the case to another law enforcement agency” or “ask Gov. Andrew M. Cuomo of New York to authorize a criminal prosecution.”

The Times reporters explain: “The investigation began after Mr. Cohen told the House Committee on Oversight and Reform last year that President Trump had knowingly inflated the value of his assets to show a net worth of as much as $8.7 billion in financial documents, many of which were provided to Deutsche Bank.”

This is by no means the first Trump-related investigation from the New York State attorney general’s office, which investigated Trump’s charitable Trump Foundation and brought about its dissolution. On Twitter, Trump has railed against James and described her as a partisan “bludgeoning tool” of Cuomo:

However, James is not a Cuomo appointee. She was voted into her position in 2018.