The developing eviction crisis is a stealthy form of voter suppression 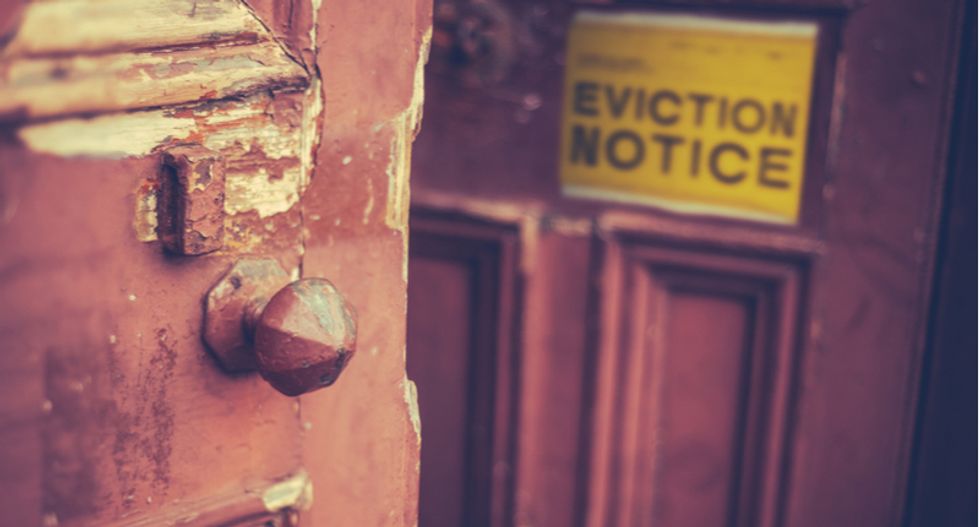 In the past week, Democrats’ fears about the Trump administration’s open assault on the United States Postal Service (USPS) have gone from a simmer to a boil, prompting House Speaker Nancy Pelosi to rush the House back to Washington to vote on an emergency intervention.

But amidst all of this well-deserved focus on the Trump-engineered postal meltdown, it is vital to recognize that this is just one part of the election heist underway. In fact, there is a potentially even more dangerous and insidious phase of the scheme about to unfold in the coming weeks. It’s dangerous because unlike the broadly-felt impact of the postal service mugging, this one is even more narrowly targeted at Democrats, and insidious because the collateral damage to American lives will be deeper and more painful.

That next phase is a massive epidemic of evictions.

To be clear, Democrats should absolutely be freaking out about the sabotage of the Postal Service. The USPS is removing 20 percent of letter sorting machines – literally throwing them in the dumpster – in order to slow down mail processing during a pandemic that is pushing significantly more Americans to want to vote from home. Mail was already going to be dangerously hindered and disrupted around the election. Now, USPS has said that key swing states Michigan and Pennsylvania are poised for delays so severe that both will have substantial numbers of uncounted ballots under current election deadlines. And to make sure that voters find it even harder to work around these barriers, postal workers have even been ordered to remove ballot collection boxes.

And this is definitely a Trump plot. Despite clear evidence in studies that voting by mail does not help Democrats more than Republicans (for instance, more absentee voting would not have changed the results of 2016), Trump believes that because Democrats’ interest in voting by mail is higher than Republicans’, postal disruptions will help him more. The fallout for Americans, such as veterans whose prescriptions are perilously delayed, is collateral damage he’s willing to accept.

But the real hammer blow in the plot is just getting started.

The CARES Act in March included a moratorium on evictions in most federally subsidized housing through July 24. Republicans’ proposal for Covid relief conspicuously did not continue it. In negotiations, they hand-waved at the idea of an extension (without providing any actual funds for rental assistance), then gave confusing up-is-down misdirection about their true intentions (including Trump’s meaningless executive order on evictions), and ultimately refused to pass a new relief bill at all.

These Republican maneuvers now leave 28 million Americans riding a wave of evictions that is poised to crash. And who are these renters?

Largely young, minority, and urban—reliably Democratic-leaning constituencies. Two-thirds of households headed by people under age 35 rent, versus only 20 percent of seniors over 65. A majority of Black and Latinx-headed households rent, twice the rate of white-headed households. The same proportion holds for the most at-risk renters who are already behind on their payments: they are twice as likely to be Black or Latinx. And all of the biggest cities are dominated by renters.

If you wanted to aim a space laser to pick off Democrats across America like in a Marvel movie – and if you couldn’t aim only on the basis of race – it would be hard to do much better than by aiming at renters.

Holding aside the staggering human cost of all of these evictions, and looking purely at the electoral consequences, putting millions of Americans out of their homes will likely have two highly disruptive effects on the election that would be concentrated among Democrats.

One is utter chaos for people who are trying to vote by mail. Layered on top of the USPS disruption already underway, evicted voters would face additional confusion and delays in requesting, receiving, and returning absentee ballots. Officially, it can take USPS 7-12 days to process mail forwarding requests at baseline and 10 business days for mail to be redirected to your new address. And that was before all of the scrambling and Trump-engineered postal bedlam. But the reality is that USPS traditionally does not commit to any estimated delivery time for forwarded mail, because delays can be much longer. And that is assuming that state laws allow absentee ballots to be forwarded, that institutions like Boards of Elections are able to handle returned mail, and that evicted people would even have immediate forwarding addresses where they could receive absentee ballots (many will not or may change addresses multiple times). For many voters, the time added in each leg of the mailing process means that there would be no practical way to get ballots returned in time to meet state deadlines.

The second issue is disenfranchisement for people who try to show up to vote in person. Voters who change their address must submit changes before state election deadlines. Most voters will have absolutely no idea that they have to do this. And if they have been evicted, they may be voting in a new precinct, or even a new town or state. Hence, a significant number will miss deadlines, will show up in the wrong place, or will show up in the right place but not have identification that matches their old address to comply with state voter ID laws.

In theory, states are supposed to allow voters in this situation to cast provisional ballots for the board of election to sort through later. But in practice, this is far from a sufficient corrective. For one thing, people whose lives have been massively disrupted by eviction and who are scrambling to keep their households together are likely to have a harder time voting in the first place. Upon learning that they face additional barriers to update their official address or to haggle with election officials, many may simply not go through the effort. For another, election experts are already deeply worried about “blue shift” – the tendency for absentee and provisional ballots to break toward Democrats. Trump has already been laying the groundwork to question any vote not tallied in-person on or before Election Day. So the prospect that millions more Democratic-leaning votes would become provisional – a mess understaffed state election officials would have to sort out while being intimidated by the President of the United States – should be terrifying for anyone hoping to avoid a Constitutional crisis.

Some may believe that it’s unfair to ascribe a sinister motive here because Trump and his Senate Republican allies would not intentionally allow millions of Americans to be evicted just to give themselves a political advantage. But this was the same sentiment that we heard before Trump admitted that he is attempting to sabotage mail delivery for that exact purpose. And also before we learned that he had asked various foreign powers to dig up dirt on his opponents, do trade deals targeted to help him in swing states, and broadly interfere on his behalf in our election. And before it was revealed that Trump didn’t care if a pandemic raged in blue states, only if it hit people in the red and purple states that he needed in November. And before that, when Trump fought with every fiber of his being against $3.5 billion in election assistance that states still need to make this year’s vote run smoothly.

Here’s a simple rule: everything that Trump is doing right now is for the purpose of putting his thumb on the scales of an election that he will otherwise lose if voters get to actually have their say. There is no other goal, no other plan. So if you see Donald Trump and his congressional cronies pushing millions of Americans to eviction, you can be sure that they are 100 percent aware of the electoral consequences, and that they want them to happen.

This is very real, and it is happening right now. It is good that Speaker Pelosi is trying to deal with the postal crisis. At the same time, Democrats cannot ignore the bigger picture. There are many fronts in this war, and they have to fight on all of them with the same urgency.