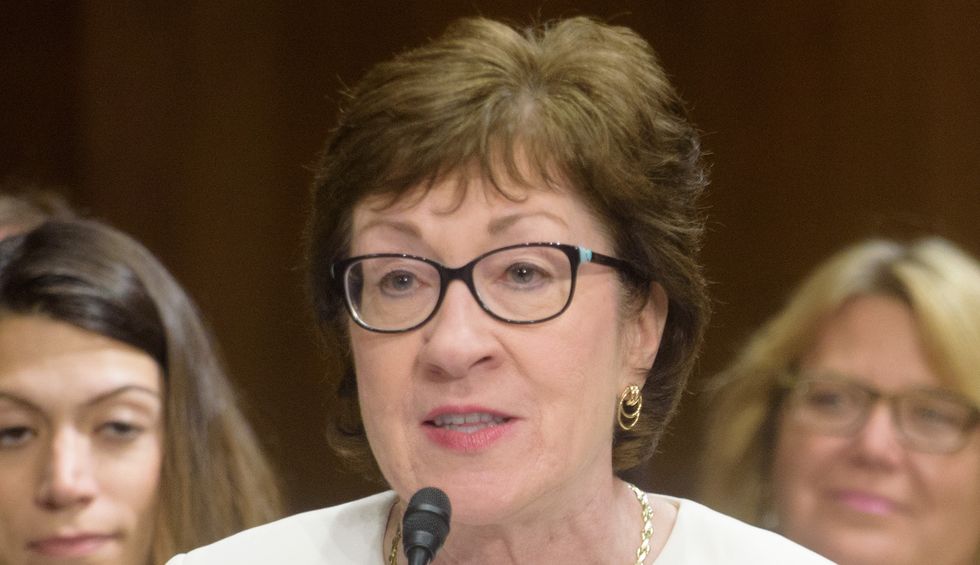 I recently found myself featured in one of Senator Collins' attack ads. Specifically, her campaign has released a video charging me, and 140,000 other small donors, with bribery for contributing to her opponent.  The ad features my face and says I "threatened" her because I dared to contribute my $20.20 to her opponent. That's quite the sense of entitlement, Senator!

The worst part is that she doesn't even believe the accusation herself. She's just slinging mud at Mainers to see if it will stick. Nevertheless, it's an interesting place to be, targeted by someone who's never bothered to meet me face to face. But it's staggering to see the meager powers that we, as citizens, have over our elected representatives distorted and maligned like that.

When your elected "representatives" fail to represent you, there are only so many things you can do. Call, text and write letters? I've done that. Sign petitions? Yup. Stop by the office and speak to a staffer? Check. Organize peaceful protests? I've done that too. And yes, I have chipped in to fund her opponent and yes, I will vote against her in November.

"Susan Collins has dismissed me and all those like me who have been fighting for real representation in Washington, and demanding accountability from our elected officials."

Each and every one of those actions is protected under our Constitution—freedom of speech, assembly, the right to petition the government for redress of grievances, and for 100 years now, women's right to vote.

Through it all, however, Susan Collins has dismissed me and all those like me who have been fighting for real representation in Washington, and demanding accountability from our elected officials.

And here's the kicker—with the Kavanaugh confirmation, we weren't trying to get Susan Collins to change her mind, or her position. We were just hoping she would stand up for what she herself has always espoused. She has always claimed to be pro-choice, but she confirmed an anti-choice justice along with many anti-choice federal judges. She's claimed to support the LGBTQ+ community, but she voted for an anti-LGBTQ+ justice. She has claimed to value women, but dismissed Dr. Christine Blasey Ford out of hand. She has claimed to value civility and decorum, but confirmed a justice who raged at the Senate Judiciary Committee.

The truth is that Senator Susan Collins not only refused to stand up for Mainers, she couldn't even stand up for herself. Now, when she's facing a strong and well-funded opponent and a difficult re-election campaign, she resorts to attacking average Mainers like me, for doing the little bit I can do to hold her accountable.

"The truth is that Senator Susan Collins not only refused to stand up for Mainers, she couldn't even stand up for herself."

You see, I can and will stand up for myself and my family. Brett Kavanaugh has already issued opinions which are dangerous to my family and my community. We will suffer real harm because of the decision Susan Collins made to put him on the Supreme Court. So now she personally attacks me in a campaign ad? She's already inflicted more damage on me, and on Maine, than any attack ad.

Nice try, Susan, but you're wrong. The money I contributed to your opponent isn't a bribe, and it's not a threat. It's a promise. Our government and our senate seat belongs to "We the People." And I fully intend to use all of my rights of citizenship to defend myself, my family and my community, and to reclaim that seat for average Mainers like me, who expect more from our senator than mud-slinging.

Jackie McNeil is a historian, writer, educator and activist living in South Portland, Maine. She has been peripherally involved with Mainers for Accountable Leadership since its inception. She is now a part of the organization, which is focused on defeating Susan Collins and holding all federal officials accountable to We the People.